A peaceful oasis in the heart of Durham 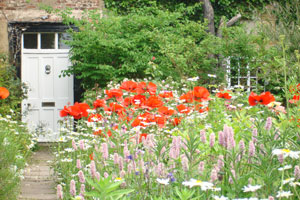 Sitting on a curve of the River Wear, with views of Durham Cathedral, is a very special garden gem. The home of Keith and Maggie Bell, Crook Hall and Gardens is a tranquil oasis away from the bustle of Durham city centre offering the visitor space and time to reflect.

Keith and Maggie welcome 25,000 visitors a year to Crook Hall and the gardens, described by Alan Titchmarsh as a ‘tapestry of colourful blooms’, form a wonderful backdrop to the Medieval Hall.

The Hall is a rare example of three eras of English domestic architecture – mediaeval, Jacobean and Georgian – where the likes of John Ruskin and Dorothy and William Wordsworth have spent time in its company and walked in the gardens.

Surrounded by approximately six acres of walled gardens each with their own unique character, Crook Hall offers plenty of nooks and crannies boasting their own horticultural secrets. 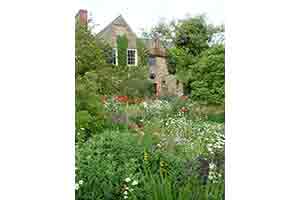 Within the walled gardens, originally the vegetable garden for the Hall, we find a profusion of cottage garden plants such as tree lupins and oriental poppies and a variety of perennials and roses. This area of the garden has been featured on BBC ‘Gardeners’ World’ and there are two trees of particular note to be found here – a beautiful Magnolia and the large Gingko Biloba. The pear trees slumped against the walls of the Hall, were apparently planted to ward off evil spirits! Hopefully, they will go on flourishing for a long time.

There is a third part of the walled garden which was the formal Georgian garden in the 1700s. This area owes a lot to previous residents of the Hall, the Hawgoods and the Cassels. The present owners have set their mark on the garden and added to the previous planting but they have tried in essence to keep to the theme of a cottage garden.

The Shakespeare Garden, established by Dr and Mrs Hawgood, the previous owners, is a testament to the rich history of Crook Hall and provides the viewer with a whole host of Elizabethan plants and herbs, their rich aroma floating on the air. Here there is a planting of old roses, lavender, yew, damson, laurel and box with a statue of the Bard himself. 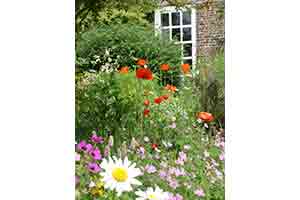 Other garden rooms include ‘the silver and white garden’ which is a celebration of twenty five years of marriage of Dr and Mrs Hawgood and the Cathedral Garden, a recent addition with leylandi hedging cut to reflect the arches of the Cathedral. Here beds of dianthus and lavender echo the stained glass windows while yew symbolizes the longevity of Christianity.

The orchard, which blooms with blossom each spring, provides a harvest of apples come autumn and the serene moat pool provides yet another area for relaxation and a space to linger.

There is a vegetable patch providing the Hall café with some tasty fresh produce and the solar wing garden, a curious space near the meadow among the bricks of the medieval hall.

Each September the gardens are lit with over a thousand candles from the Medieval Hall to the moat pool in order to say farewell to the summer and welcome the autumn.

Crook Hall has three gardeners and a group of volunteers, who all work together with the owners to ensure that this special garden retains its unique tranquility.

Visitors often return in different seasons so they can enjoy the changes in the garden and one feels sure that the offer of a traditional cream tea does not go amiss.

Keith Bell is particularly proud that the garden opens all year round with the planting scheme aimed to maintain colour from February to November. Obviously there are drawbacks gardening so far north and working with the British weather, which he admits can sometimes be a challenge.

He takes particular pride in the garden’s roses, with many varied types and the hydrangeas and camellias, which do well: “It’s a garden to be in rather than visit,” he says. “I think this is because we pride ourselves on opening the garden as a space, or home, where people can come and dwell rather than look at. It is a very serene experience.”

The garden also opens under the National Gardens Scheme each spring. For current opening times and to find out more information about Crook Hall and gardens visit their website at: