Arts and Crafts houses in the Lake District 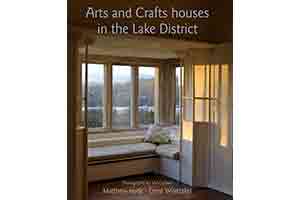 Having a keen interest in the Arts and Crafts period my curiosity was immediately spiked when I saw this new publication by authors Matthew Hyde and Esme Whittaker. In ‘Arts and Crafts houses in the Lake District’, the authors show how the movement flourished for a brief but brilliant decade at the beginning of the 20th century.

Fortunate enough to live in the Lake District and being familiar with many of the iconic properties covered by the book, I was delighted that at last someone had taken the trouble to record and photograph them.

I expected ‘Arts and Crafts houses in the Lake District’ to be a sumptuous publication but I was not prepared for the beautiful coffee table book within which the authors carefully show how the Arts and Crafts movement developed in the Lake District. The superb and detailed photography of Val Corbett is an extra bonus, perfectly complementing the text and certainly bringing the period to life.

The much admired Arts and Crafts houses of the Lake District are in a league of their own. Mostly built as holiday homes for wealthy northern industrialists seeking an escape from the towns and cities of their everyday work, on land readily available to purchase, these houses embraced a new sense of informality, simplicity and comfort suitable for this life of leisure. As the authors point out the English Lake District and especially the long eastern shore of Lake Windermere provided fertile ground for the Arts and Crafts house.

The availability of local stone and slate, the beautiful scenery and the lure of water, provided the perfect setting while an abundance of local labour and craftsmen ensured that the houses would be built to the highest standards. In 1810 Wordsworth offered building advice specific to the Lake District setting which by the time the Arts and Crafts movement came along were still relevant. The need to relinquish sites on the summits of naked hills and create houses that were “not obvious, not obtrusive, but retired” was advice that architects like Voysey, Baillie Scott and Lutyens, certainly took to heart.

The former three architects are well known but there are lots of others who worked on these Arts and Crafts houses who were less so and several who went on to establish national and international reputations. The Windermere based architect Dan Gibson and the building firm of Pattinsons, produced some of the most locally inspired work such as Brockhole, Birket Houses and Waterbeck. Gibson often worked with Thomas Mawson (with whom he formed a formal partnership for a period) so that the house and garden were built in tandem, as at Brockhole.

W.H. Ward, (High Moss and Little Ellers) concentrated his work mainly in the Keswick area and is described as someone who would sooner research and write than build houses. We are grateful that he chose the latter rather than the former. Arthur Huddart who designed Gatehouse, in Eskdale, (now an Outward Bound centre) was built for Lord Rea. Gatehouse is an example where the Arts and Crafts style may not be apparent from the exterior as the building has a late Victorian look which belies the rich Arts and Crafts assembly of its interior.

The much visited Blackwell, designed by M.H. Baillie Scott, built for a Manchester Brewer, Edward Holt, has to be one of my favourite haunts and is a good example of the Arts and Crafts house which does not necessarily completely face the lake but is situated end-on with one bay window making the statement for the view.

Several of the houses featured in the book have become hotels, as in the case of Cragwood, designed by F.B.Dunkereley and Langdale Chase designed by Joseph Pattinson, the younger brother of the Windermere builder G.H. Pattinson. However, many are still lived in as private residences and the authors include a useful ‘places to visit’ list at the back of the book as well as a list of other places of interest.

Val Corbett’s splendid new photographs of both exteriors in their glorious settings and the wonderful tiles, plasterwork, textiles, carvings and ironwork of their interiors, are just a joy and bring the book absolutely to life. There is also a plan, newly drawn to the same scale, of each of the most significant houses.

The book is divided into sections starting with choosing the site followed by a chapter on Architects and their houses. I particularly liked the chapter on Decorating the Arts and Crafts house, where we are treated to a cornucopia of plasterwork, dining room furniture, cupboards and all manner of decoration. Items from the Keswick School of Industrial Arts appear here and examples of beautiful woodwork by craftsmen like Arthur W Simpson.

There is a chapter on the Lakeland way of life where we discover the importance of the verandah. As Thomas Mawson pointed out: “The increasing love of out-door life which has been so pronounced in recent years in this country, makes a spacious verandah or colonnade on the south front of the house a necessity.” It was not lost on him and other garden designers of the period that the garden be seen as a series of outdoor rooms providing a space for both social and quiet leisure activities.

In the conclusion reference to modernism and more recent buildings, particularly where an amalgam of both Arts and Crafts and Modernism might be evident is included and this final section ties in well to bring the book together as a whole.

The book will be a joy to architects and devotees of the Arts and Crafts movement as well as being of great interest to all lovers of the Lake District. There is ample illustration of the tendency to work with the natural characteristics of the site typifying gardens surrounding the Lake District Arts and Crafts houses. The creation of rock gardens and slate stone terraces celebrating the inherent nature of the site are as familiar as the semicircular bay windows set to make the most of the view.

Matthew Hyde is an architectural historian and author of the new ‘Pevsner’’for Cumbria (2010). Dr Esme Whittaker is a curator and writer and lectures widely on the Arts and Crafts house in the Lake District. Val Corbett has lived in the Lake District for the past 30 years and is a highly regarded freelance photographer. Her garden photography appears regularly in Country Life.

‘Arts and Crafts houses in the Lake District’ by Matthew Hyde and Dr Esme Whittaker, is published in hardback at £35 by Frances Lincoln – www.franceslincoln.com and available in bookshops now.