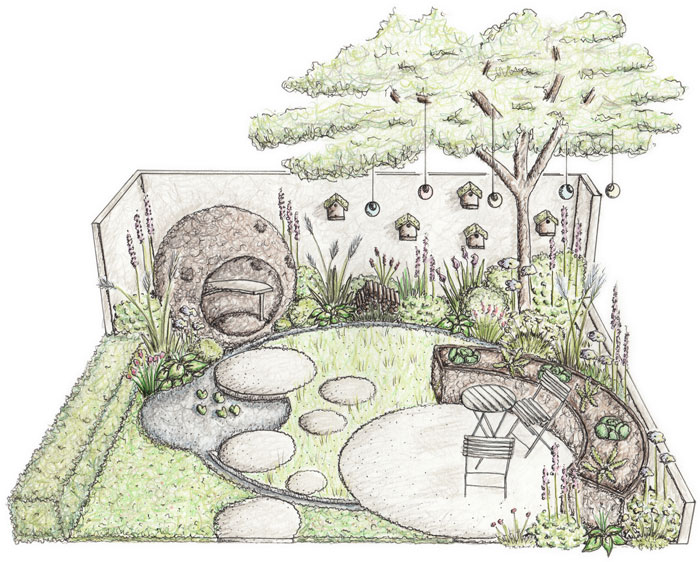 An exhibit at the 2015 RHS Hampton Court Palace Flower Show will urge urbanites to take steps in their own gardens to help declining bird species.

Designer, Sarah Keyser, wants to demonstrate that small and inexpensive steps can be taken to help make urban spaces more bird-friendly, without compromising on style.

With a number of garden species in decline, there is a growing need to create more bird-friendly spaces in cities. Numbers of garden birds, such as sparrows and starlings, have been falling rapidly over the past few decades and a root cause of this is their loss of habitat, especially in cities.

Earlier this year the Royal Horticultural Society (RHS) launched a new campaign called Greening Grey Britain, after a survey found that three times as many front gardens are now paved over compared to 10 years ago.

Sarah’s garden is called ‘City Twitchers’ and is sponsored by Living Landscapes. It contains a spherical bird hide, created from woven willow that provides a stylish bird-watching spot. A Chamomile and Sedum lawn attracts birds as well as nourishing insects. There are bird boxes throughout the garden providing shelter, bird feeders and a bird bath.

“Urban garderns need to include plants that allow wildlife to thrive,” says Sarah. “For example, the Sedum turf in the ‘City Twitchers’ garden is inhabited by bugs and wildlife which in turns feeds the birds. We really need to act now to help our birds.” Sarah’s garden is full of ideas to take home for your own garden and her message is very clear – it doesn’t take much to make a difference.

The latest ‘State of UK Birds’ report, led by the RSPB, British Trust for Ornithology (BTO) and the Wildfowl & Wetlands Trust (WWT) revealed that starling numbers have dropped by more than half, house sparrows have decreased by 65%, tree sparrows by 90% and song thrush numbers declined by 58% between 1970 and 2012.

Harry Bellew, RSPB spokesperson, points out that many garden birds are in desperate need of our help and rely on us for survival: “Throughout the year, birds need food and water, and as well as subsistence,” he says. “A safe place to shelter and make their home can really give them a boost.

“Gardens that provide these things are an invaluable resource for birds and are likely to have a significant effect on their numbers, perhaps even playing a pivotal role in reversing some declines so we hope people are inspired by the ‘City Twitchers’ garden to give nature a home where they live.”