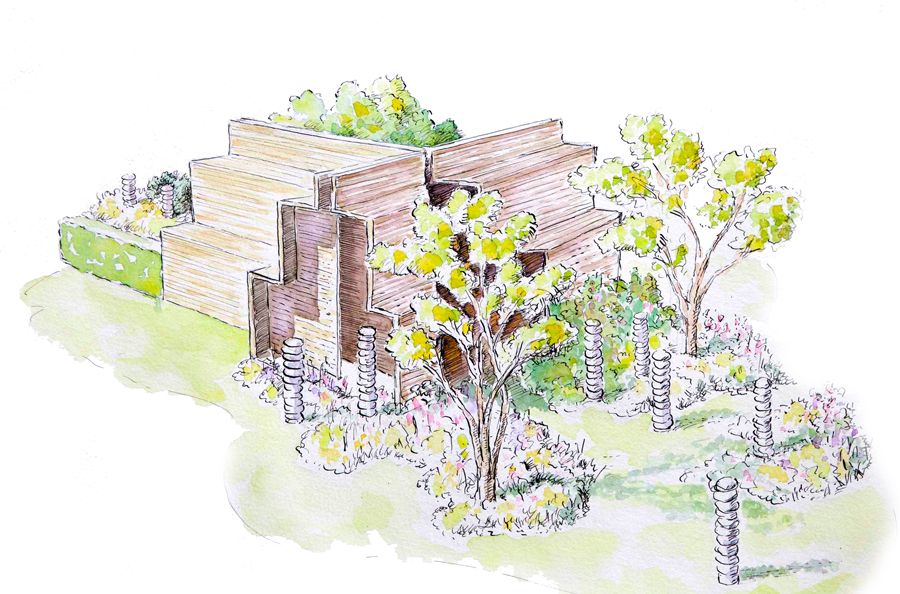 Brewin Dolphin, the wealth management company, will be exhibiting for a second year, after its debut in 2017, at RHS Chatsworth this year with a conceptual garden inspired by a past landscape of the Chatsworth Estate.

Designed by multi award-winning garden designer Paul Hervey-Brookes, the garden is entered in the FreeForm category.

At the inaugural 2017 RHS Chatsworth Flower Show, the Brewin Dolphin garden, designed by Jo Thompson, won the People’s Choice Award.This year, Paul, who was awarded Gold, Best in Show and Best Construction awards at the inaugural 2017 Show, for his Quarry Garden, will create a conceptual garden for Brewin Dolphin echoing a ‘lost’ village that once stood in the shadow of Chatsworth House, before being removed to make way for Capability Brown’s famous landscape.

The garden encourages visitors to imagine the earlier landscape, featuring at its centre, a contemporary pavilion that will pay homage to the lost village and is designed to reflect the internal void of buildings that existed before. Elsewhere, immersed within the garden among dense borders of colourful planting, a collection of amorphic sculptures at different heights, will represent the silhouettes of people who have passed through the landscape.

Planting will reference the indigenous landscape that would have existed before the village was removed and combines ethnobotanical plants with decorative varieties that would have been introduced in later years. Herb expert, Jekka McVicar, will grow eight specialist varieties directly referencing medicinal plants and food crops that would have been grown when the foundations of Chatsworth House were laid. Included in these will be Wild Angelica, used as a vegetable until the 20th century and taken as a medicine to treat ailments such as scurvy; Sanguisorba, better known as Salad Burnet, one of the staple herbs to travel across the Atlantic with the Pilgrim Fathers and Tanacetum, sometimes known as Bachelor’s Button or Feverfew, which is still used to treat migraines today.

Paul’s design will include key plants Verbascum, Buxus and Reseda and three different trees will feature including two Copper Beach, reflecting the trees in the surrounding parkland. Decorative plants will be planted randomly to create a garden that blends into the existing landscape while fusing layers of time together.

The pavilion on the garden will be built by craftsmen local to the Chatsworth Estate and will echo the classic silhouette of a Tudor building with its familiar overhang. This will be clad in 12,000 individual split Chestnut laths, a reference to the surrounding landscape. 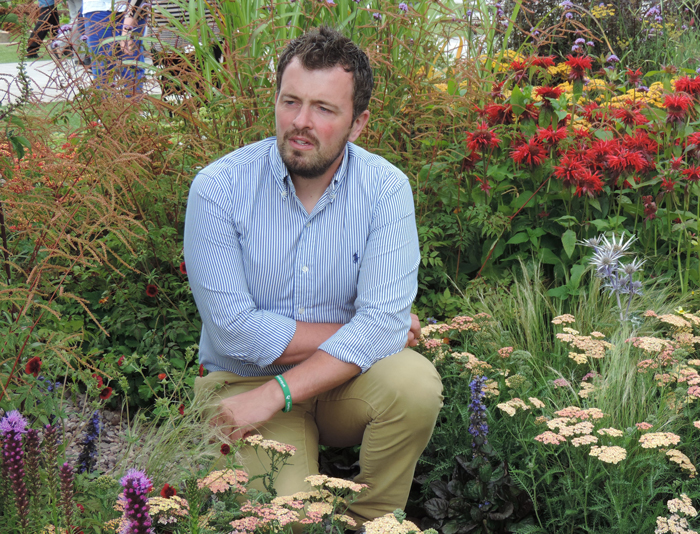 Commenting on his design, Paul Hervey-Brookes (pictured above) said: “My idea for The Brewin Dolphin Garden started to develop after a tour of Chatsworth House with the Duke of Devonshire.  Standing on the roof looking across the magnificent grounds, his Grace pointed to an area where the footprint of a lost village could still be seen in dry weather.  The idea of a void becoming a space and the question of how and when our heritage is preserved fascinated me. Designing the Brewin Dolphin Garden in the very place that the village once stood, has given me a unique opportunity to explore it further.”

Rupert Tyler, National Director at Brewin Dolphin explains that they are delighted to be back at RHS Chatsworth for a second year and to be working with Paul, whose talent for creating beautiful and captivating gardens made such an impression on everyone at the show last year: “The concept behind the Brewin Dolphin Garden is fascinating and it’s particularly exciting to be creating something that has such a direct link to the Chatsworth Estate,” said Rupert. “Interestingly, the ‘lost’ vilIage dates back to the same moment in time that Brewin Dolphin was founded, in the 1700s, and the idea of taking values from the past and preserving them for the future perfectly reflects our own principles. I’m sure our clients and visitors to the show will be fascinated by the story and that they will enjoy seeing it bought to life in such a spectacular display,” he adds.

Paul has created show gardens for over 10 years and is a multi-medal award holder both in the UK and abroad. In recognition of his work at RHS Chatsworth in 2017, Paul was awarded a Fellowship of the Institute of Quarrying, for his work to bring a wider knowledge of the industry to the general public – the only person outside the quarrying industry to receive this honour.

Paul’s ability to read landscapes and evoke intense feelings and emotions has won him wide acclaim and we feel sure that his design for Brewin Dolphin at the 2018 RHS Chatsworth Flower Show will be another show-stopper. Can’t wait!