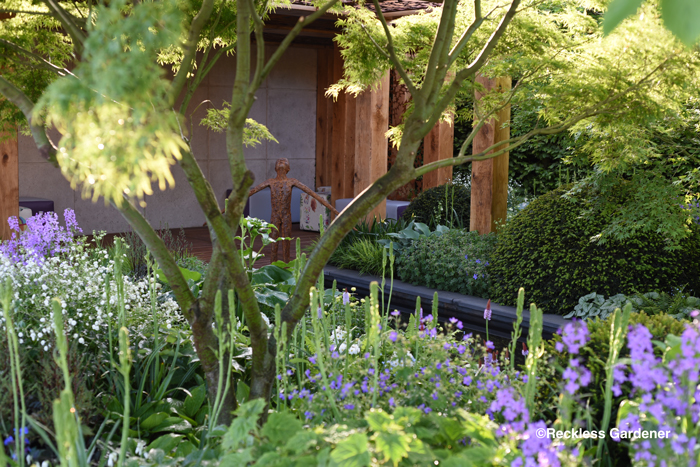 Preservation of natural habitats and gardens inspired by history and personal experience will be among the key themes for the Royal Horticultural Society (RHS) 2017 Chelsea Flower Show, writes Sandy Felton.

Announcing the initial line-up, the RHS whets the appetite for the world famous Show which once again looks set to inspire millions through showcasing the best in gardening.

Show Manager, Tom Harfleet explains that they are delighted once again to welcome back some of the best British and International growers as well as multi-award-winning designers.

Announced so far in the Show Garden category is James Basson, aiming for his third consecutive RHS Gold medal with The M&G Garden 2017, for the show’s headline sponsor. As a big fan of his work I can’t wait to see the 2017 garden set to demonstrate the rich diversity of Maltese flora and the beauty of this harsh environment. (design pictured below) 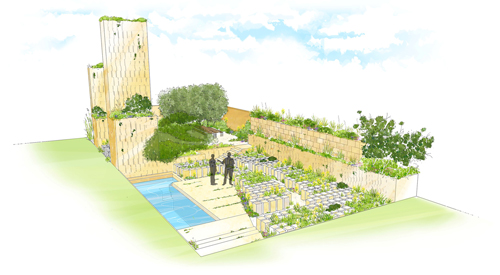 It will be good to see design duo Andrew Wilson and Gavin McWilliams back at Chelsea again. Their 2017 garden – ‘Breaking Ground’ will celebrate the work of Wellington College and re-create the endangered heathland in Berkshire where the college is situated.

Designer Charlotte Harris makes her Chelsea debut with a garden for sponsor ‘The Royal Bank of Canada’ (design pictured below) inspired by the Boreal forests and freshwater lakes of Canada. The garden will feature pines, larches and birch. Harris has chosen an all-female team in the hope it may inspire more women to consider a career in garden design.. 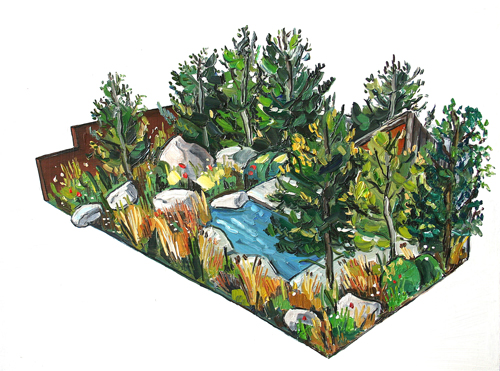 Lee Bestall celebrates ‘500 years of Covent Garden supported by Capco’ with his garden depicting this much-loved area of London through its transformation from Westminster Abbey’s orchard garden in 1201 to the bustling marketplace of today.

In the Fresh Garden category, Kate Gould’s innovative ‘City Living’ is set to inspire residents of urban apartments with no access to outdoor space with a three-tired space using plants suited to different environments. Ruth Wilmott designs the ‘Breast Cancer Now: Through the Microscope’ garden highlighting the work of the charity’s scientists in a garden that promises vivid pinks and magenta blended with coppery tones and white highlights.

‘Inland Homes: Beneath a Mexican Sky’ designed by Manoj Malde, is inspired by Mexican architect Luis Barragan. The design will see colour-washed walls in clementine, coral and cappuccino provide dramatic backdrops to the planting scheme, which will feature multistem trees and drought-tolerant herbaceous planting.

Sarah Eberle will be making a welcome return again this year with another Artisan Garden following a Mediterranean theme for sponsor Viking Cruises. Winner of 13 RHS Gold Medals, Sarah is another Chelsea favourite who has inspired us over a number of years. The ‘Viking Cruises Garden of Inspiration’ will feature date palms, citrus and succulents and is based on the distinctive work of architect Antoni Gaudi – can’t wait!

Dr Catherine MacDonald also makes a welcome return for her second solo year with a conceptual garden inspired by the story of Seedlip, the world’s first non-alcoholic spirits company. The design is a celebration of alchemy and marries 17th century apothecary with the modern laboratory. The planting palette will be influenced by plants listed in the 1651 book The Art of Distillation.

Garry Breeze will design ‘The IBTC Lowestoft Broadland Boatbuilder’s Garden’ featuring a replica of an 800 year old beautifully crafted oak boat which was found on the Norfolk Broads. Last year, Gary and his co-designer Martin Cook caused a lot of interest with ‘The Marble and Granite Centre – Antithesis of Sarcophagi’ (Gold) which won best in category so it will be interesting to see his design for 2017.

The Artisan Category looks particularly strong for 2017 with a mixture of Chelsea favourites and debut designers, a fact which I am particularly pleased about, because I do love these small carefully crafted gardens.

There was certainly some ‘hot’ stuff in the Great Pavilion at the 2016 show – I still haven’t got over that brilliant train carriage – and 2017 looks to be another stunner. Burncoose Nurseries will take inspiration around the environmental issues surrounding bees and will shine light on the lesser-known plants pollinated by flies, moths and beetles. Raymond Evison will be creating a contemporary design inspired by the seashore and Birmingham City Council will bring the whimsical and wonderful world of Rowland Emett to life with a floral re-creation of ‘A Quiet Afternoon in the Cloud Cuckoo Valley’, the last-known machine made by the cartoonist and inventor in 1983. 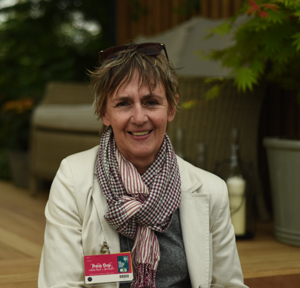 Last year, Sarah Eberle (pictured left on the 2016 Hillier Garden) created a stunning design for Hillier Nurseries and once again she will cast her spell on their 2017 exhibit as the company aims to continue its RHS Chelsea legacy and secure the firm’s 72nd consecutive Gold Medal. Sarah will be assisted by the RHS Young Designer of the Year, Caitlin McLaughlin.

There are usually plenty of anniversaries to celebrate at RHS Chelsea and 2017 will be no exception. The Hardy Plant Society will feature 60 hardy plants for its 60 years, Hooksgreen Herbs celebrates 10 years exhibiting at RHS Shows and Fibrex Nurseries will be creating a tiered exhibit in tribute to the 30th anniversary of the National Plant Collection of Pelargonium. Hardy’s Cottage Garden Plants will be returning for their 25th show year while Hare Spring Cottage Plants and Calamazag Nurseries will be exhibiting for the first time.

Tickets to RHS Chelsea Flower Show 2017 are now available to buy at www.rhs.org.uk/flowershows