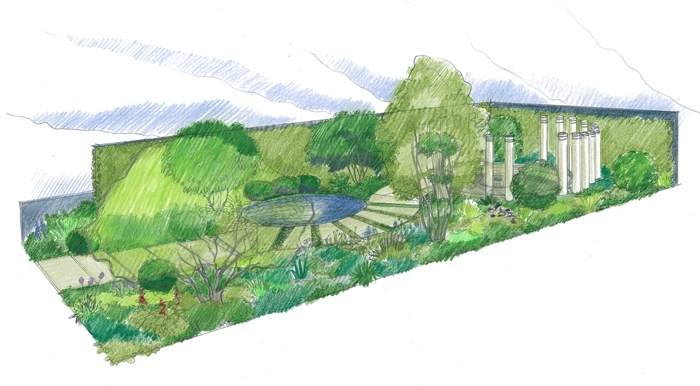 Australian based designer, Charlie Albone has created his first RHS Chelsea Show Garden with a design inspired by his late father. ‘The Time in Between with Husqvarna and Gardena’ will be an emotive space where Charlie can tell his dad all that has happened in his life.

Charlie was born and grew up in the UK but sadly at aged 17 he lost his dad. He moved to Australia and has now forged a career in Landscape design working in Australia and abroad.

Passionate about beautiful gardens, Charlie has been designing and building green spaces for almost 15 years. In Australia, Charlie enjoys a high profile in the media as The LifeStyle Channel’s resident Landscape Design Expert and also appears on several LifeStyle Channel shows.

It was while he was at college that Charlie started his own landscaping company “Inspired Exteriors” which he now runs as a full-time business. His main client base is in Sydney’s Eastern Suburbs, where he creates stylish urban gardens. He has also worked in France and the UK. He also writes regular expert columns in a number of Australian magazines and leading newspapers including Grand Designs Australia Magazine and Inside Out.

Although Charlie (pictured below left) is exhibiting his own first show garden at RHS Chelsea, he is no stranger to the prestigious flower show having been invited to work on Alan Titchmarsh’s garden at the 2014 show. He was awarded a Silver Medal for his first ever show garden at the inaugural Australian Garden Show last year. 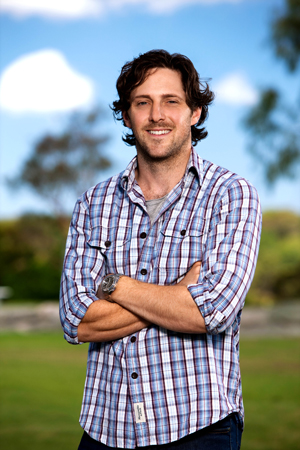 The garden will be an emotive space and Charlie’s way of updating his late father about what has happened in Charlie’s life since his dad died. The different sections will each tell a story.

The first third of the garden forms a wide path (enough for him and his family) wandering through all the plants Charlie loves and can grow in Sydney.

The middle third is a place for reflection and comprises a water feature that empties its contents in under seven seconds (it then fills up slowly and repeats the process.)

The final third is a sunken intimate courtyard based around a fire pit while the courtyard is surrounded by hand carved sandstone pillars that represent important people in his life. This is an intimate space to sit, connect and communicate with loved ones.

Varied textures and colours including silver, white, purple and pinks complement the hard landscaping with planting to be enjoyed and supply interest all year round.

Best of luck to Charlie and his team on their Chelsea debut.