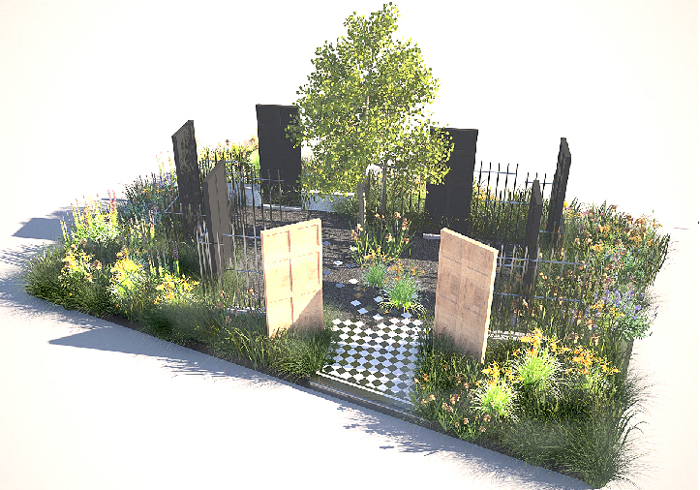 A garden designed in celebration of the passing into law of the Modern Slavery Act by the British Parliament in March 2015 will feature at this year’s RHS Chelsea Flower Show.

Designer Juliet Sargeant, wants to highlight that the passage of the new law is just the beginning – 90% of actual change in circumstances is as a result of law enforcement and the general public – so it is with this thought in mind, that a group of like-minded individuals from all walks of life have come together with the idea for a garden at the famous flower show.

They are disturbing numbers to read but current statistics tell us that there are an estimated 13,000 slaves living in UK and more than 27 million people worldwide. The aim of this garden is to raise public awareness of the issue.

Commenting on the thought behind the garden, Modern Slavery Garden Team Member, Mirabelle Gavin said: “Being involved in the RHS Chelsea Flower show affords us a wonderful opportunity to get the message into the living rooms of the great British public, build support and help end modern slavery.”

The garden displays a series of dark imposing locked doors which is symbolic. Modern slavery is hidden behind closed doors. The bright front to the doors and colourful planting illustrate the ordinary streets where we live. The darker centre to the garden hints at a hidden reality; people still being kept in captivity and forced to work, in every part of the UK today.

The design features an English oak tree as it was under an oak that William Wilberforce stood when he dedicated his life to ending slavery in 1787. Small oak seedlings around the base of the tree serve as a reminder of the work that is still to be done if we are all to be free in the 21st century.

The important message of this garden is also expressed in the translucent planting separating the front of the garden from the darker inner space. Feathery fennel and the stems of verbascums and lupins echo the vertical iron railings surrounding the garden.

A ribbon of warm apricot and orange hues runs around all four sides of the garden and contrasts with the bright colours that reflect each of the painted front doors. Cottage garden favourites, such as anthriscus ‘Ravenswing’ and peony ‘Coral Sunset’ create a feast for the eyes.

Juliet has chosen to include static pauses in the planting with the rare shrubs coprosma Lemon & Lime and coprosma ‘Pina Colada’ to contrast with the more dynamic forms of uncinia rubra and amenanthele.

Juliet is a garden designer with a special interest in how gardens can contribute to health and well-being of individiuals and society. Click here to take a look at Juliet’s video in which she explains her thoughts and ideas behind the Chelsea garden.

William Wilberforce ended the transatlantic slave trade but not slavery. According to the Trafficking in Persons Report, produced by the US Government, there are 27 million people in slavery around the world. That’s more than the entire history of transatlantic slavery.

The Modern Slavery Act 2015 specifically addresses slavery and trafficking in the 21st century and is one of the first in the world to do this.

You can find out more about the Modern Slavery Garden by logging onto http://www.modernslaverygarden.com