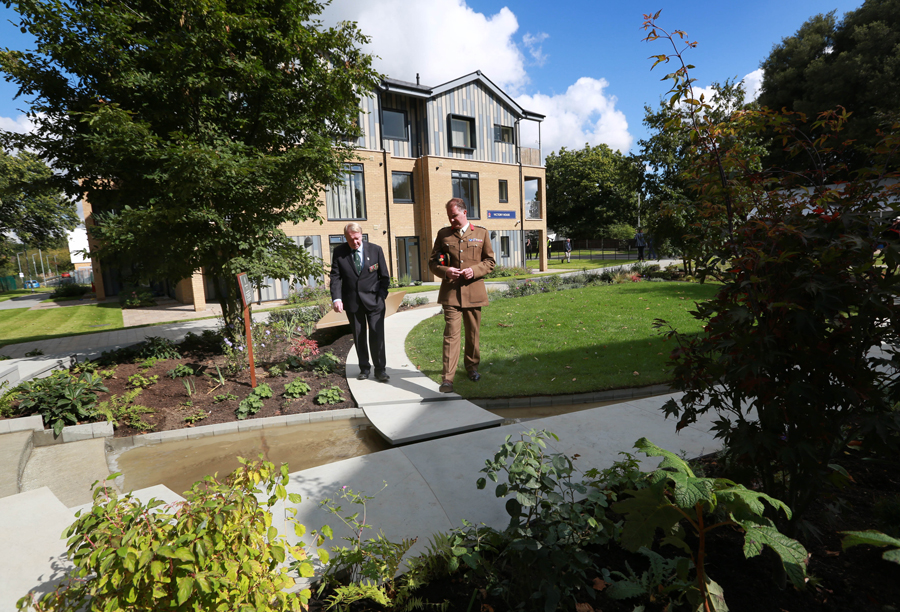 The Gold medal winning Chelsea Barracks Garden, designed by Jo Thompson, for the 2016 RHS Chelsea Flower Show, has now been unveiled in its new home at the Royal British Legion Industries (RBLI) Centenary Village in Kent.

Donated by the Chelsea Barracks Foundation, the garden is situated at the RBLI’s new village in Aylesford, Kent, and marks the completion of the first phase of 24 apartments designed for injured veterans.

The village will eventually include permanent homes for more than 80 residents along with a large community centre offering welfare, support and training. The Chelsea Barracks Garden forms part of the centerpiece of the new housing development, providing much-needed space for relaxation, reflection and recuperation.

The garden’s designer, Jo Thompson and Secretary of State for Defence, Sir Michael Fallon, attended the opening. The garden draws on the heritage of the Chelsea Barracks site in London, with cues taken from the architecture of the new neighbourhood being created on the site in SW1, which neighbours the Royal Hospital (where the Chelsea Flower Show has been held since 1913).

Roses were the main feature of the garden reflecting the listed Garrison Chapel, with its historic Rose Window, which is preserved at the heart of the new development on the Chelsea Barracks site itself. 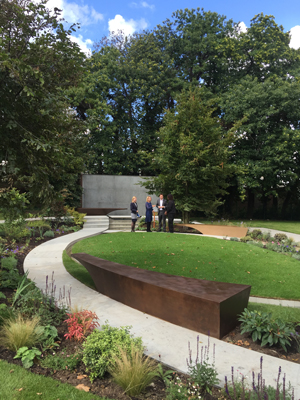 Jo Thompson is thrilled that the garden has now been relocated in such a worthwhile home as the RBLI village: “It is always a joy to find a permanent home for a Chelsea Flower Show garden, particularly so when linked with an important charity. The Chelsea Barracks Garden is a traditional British rose garden, re-imagined for the 21st century. I very much hope it will provide ex-service personnel with a beautiful place to enjoy, as well as offering the chance for residents to get involved with a range of activities to aid their recovery,” she said.

Richard Oakes of The Chelsea Barracks Foundation expressed how impressed they had been with the valuable work done by the RBLI to support ex-service men and women as they transition to civilian life: “Given the important military heritage of the Chelsea Barracks site, the Royal British Legion Industries’ Centenary Village in Kent seemed the perfect home for our garden,” he said.

The Chelsea Barracks Foundation also sponsored veteran John Ahben to undertake training and gain formal horticultural qualifications enabling him to carry out the ongoing maintenance for the garden in its new location. For John, the course has given him a lifeline and an opportunity to have a second chance after his injury: “Since beginning my apprenticeship, I have acquired new skills and developed a real passion for horticulture. It feels great knowing that I am working on such an important project. And on a personal level, I get to look out of my window every morning and feel a real sense of achievement,” he said. 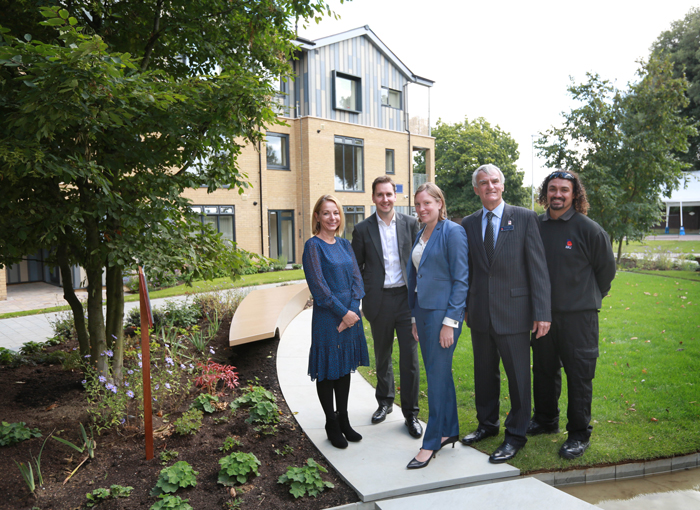 The RBLI’s chief executive, Steve Sherry CMG OBE, is delighted to have such an impressive garden at the heart of the new housing development: “The village will be home to many veterans, some of whom will have faced great difficulties following their return to the civilian world, including life-changing disabilities,” he said. “It is so important to ensure that they have a comfortable and stable home where they can safely and happily transition to civilian life. This garden very much supports with this,” he continued.