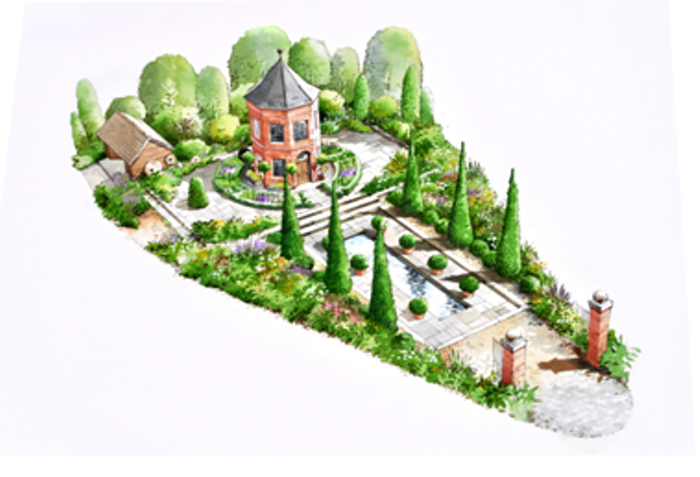 Garden designer Diarmuid Gavin has more than a few surprises up his sleeve when it comes to his design and planting style for the Harrods British Eccentrics Garden at this year’s RHS Chelsea Flower Show (24th-28th May 2016).

For the first time ever at Chelsea he intends to let go of his contemporary architectural style of planting and embrace a different feeling – like Harrods, more British, full of colour, fun and stylish in an altogether different, more quirky way.

We can always be sure that any garden Diarmuid creates is a ‘must-see’ and one feels this creation for the 2016 Chelsea Flower Show will be no different.

He is waving goodbye to his usual pared back colour palette of greens and russet tones and has chosen to paint a picture, tell a story, a pastiche of a quintessential British garden from days gone by and inspired by that most British of illustrators Heath Robinson.

We can be sure that his garden will intrigue, enchant and amuse show visitors in equal measures! 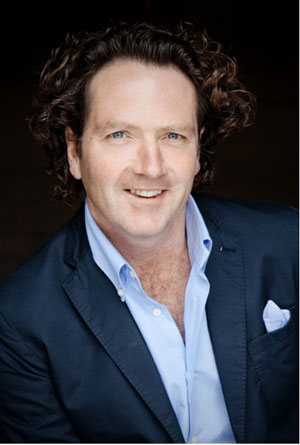 The main trees he has chosen include Carpinus betulus and the use of topiary is key. Diarmuid (pictured left) has been watching them take shape in Belgium over a five-year period and, for Chelsea, they will be in full light green leaf.

Bay trees will form the central ‘performing’ plants, again sourced in Belgium, where bay has been a tradition of cultivation since the 16th century. Through generations of nurserymen, some outstanding genetic material has been passed down as well as technical expertise. Bay is still a luxury product and since 2015, has had the status of a European ‘protected geographic indication.’

To get the perfect conical or domed shape, bay trees are turned around while they receive their haircuts done by an automatic machine that the Belgian nursery Lauretum have invented especially for this job. Diarmuid’s mechanical engineers who are making the Heath Robinson inspired trimming and clipping gadgets required precise measurements of each tree, including width, height, weight, girth and pot size to ensure that the machines would be fit for purpose. So look out for a few surprises when the bay trees twirl for real in their perfectly manicured glory!

Flowering plants, ferns, grasses and a few shrubs are being grown in the UK and Italy at nurseries such as Hardy’s Cottage Garden Plants, Crug Farm, British Wildflowers and Valfredda. Seven buxus spheres will be embedded in each flowering border, along with the 3 x 4 meter high conical bay trees. The flowering perennials, ferns, grasses and bulbs will play host to the topiary shrubs and trees, acting as foils and blending in with them before they begin their ‘performance’.

The borders on either side of a sunken pool will have different colour schemes with one border offering up a sulphur and white colour scheme filled with flowering herbaceous perennials and roses. Here the colour scheme is of pure white, sulphur yellow and green and featuring elegant spires of white foxglove and Eremurus White Beauty offering great contract with the acid yellow-greens of frothy Alchemilla and Euphorbia.

The opposite border sees a harmonious planting blending through a kaleidoscope of blues, purples and soft pinks. Plants to look out for here will be a collection of blue cranesbills – G. himalayense, Mrs. Kendall Clarke and Rozanne and lots of Nepeta Summer Magic.  Purple sages, S. Caradonna and Mainacht create a hazy background  to showcase delectable pink roses  such as Rosa  ‘Ballerina’ , ‘Comte de Chambord’ ‘St Ethelburga’ and Rosa ‘Louise Odier’ along with delightful Antirrhinum Pretty in Pink, Chinese foxglove Rehmannia Magic Dragon and stronger shades of crimson – Astrantia Ruby Wedding and old school Chelsea favourite Cirsium rivulare Atropurpureum. Deeper tones of purple will be provided by Aquilegia William Guinness and Iris ‘Dusky Challenger’ to contrast with the softer pinks of Achillea Lilac Beauty and Digitalis Sutton Apricot.

Harrods, offers the finest merchandise from its iconic Knightsbridge store attracting both loyal customers and international visitors. Founded in 1834 as a grocer and tea merchant, Harrods has continued to go from strength to strength, guided by its philosophy ‘anything is possible’, which seems very appropriate for the theme of Diarmuid’s garden.