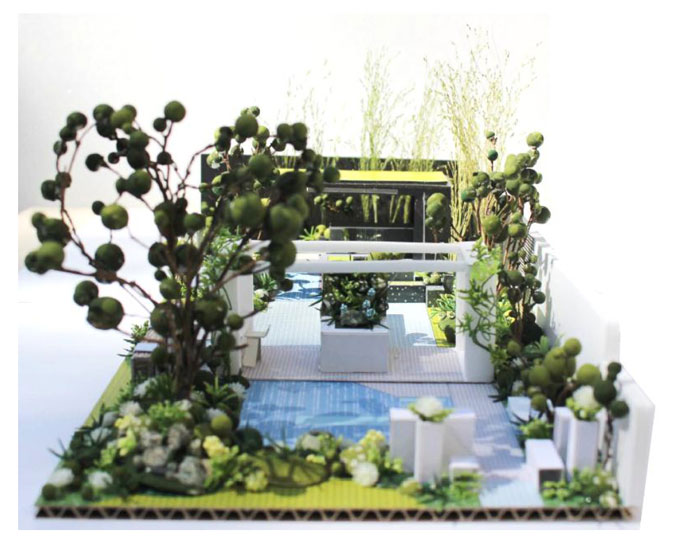 The Watahan East and West Garden designed by Chihori Shibiyama and Tea Yano, for the 2016 RHS Chelsea Flower Show, is inspired by the designers’ experiences within Japan and England.

The design itself is a reflection of the two cultures distinctive styles – the stylistic principles of the manicured minimalist zen gardens of Japan and the asymmetric forms found within bonsai and ikebana while also incorporating the dense informal planting styles found in the UK.

The fusion of East and West is also represented by key features in the garden including two pools of water representing both Atlantic and Pacific oceans as well as three large trees around which the garden is structured.

Walking through the garden visitors will experience moving between two countries/cultures united seamlessly within a single space.

There are two planting themes, one in the east and one with differing colour pallet in the west. The east has a more simplistic colour combination, with flowering plants in yellow or white and green leaves contrasting against a jet-black wall, while in the west, pink, orange and purple flowers and green leaves are based in front of a pure white wall.

Achillea filipendulina ‘Cloth of Gold’, Verbascum ‘Cotsworld Beauty’ and Geum ‘Fire Storm’ will feature. Green colour is prevalent in both east and west and will be expressed in Malas and Acert, which are the main trees and serve to tie the two halves of the garden together.