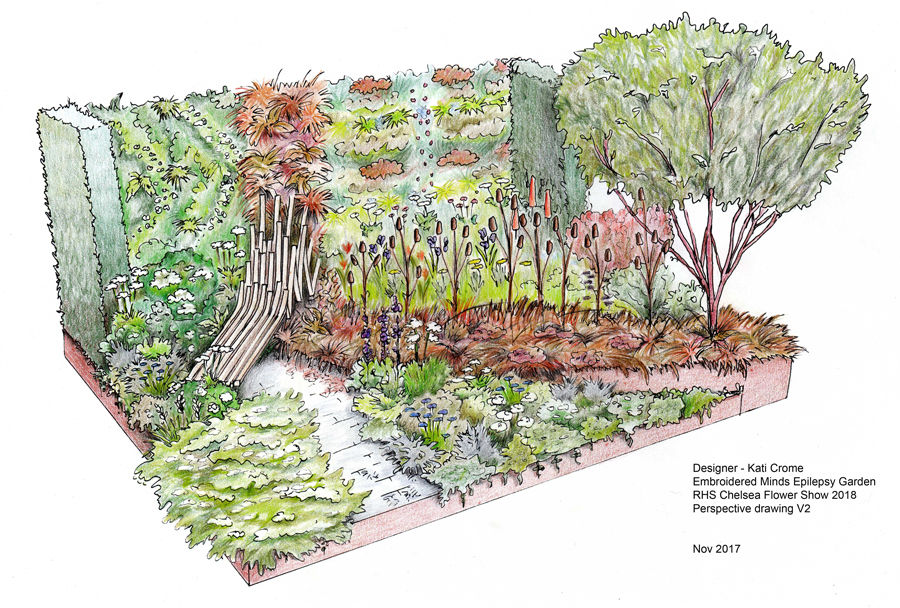 Designer Kati Crome will be returning to RHS Chelsea 2018, with her fifth garden – The Embroidered Minds Epilepsy Garden – to raise awareness of epilepsy and how it remains a challenge today.

Sponsored by Andrew Thomas (of the Embroidered Minds project and husband of the late Leslie Forbes) and part sponsored by the Epilepsy Society, the garden finds its inspiration from Victorian craftsman William Morris, who had a daughter with the condition. The little-known story behind the garden is interesting and challenging and centres around Morris’ daughter Jenny, who developed epilepsy in 1876.

It was the late Leslie Forbes (who sadly died in 2016 of a major epileptic seizure) who stumbled upon the story of Jenny while she was being treated at the National Hospital for Neurology and Neurosurgery (NHNN), Queen Square, London.

After working as a graphic designer for Vogue magazine and BBC Television, she went on to write and illustrate four food and travel books, including the best seller ‘A Table in Tuscany’. She also wrote and presented several radio series for BBC Radio including ‘Table Talk’ and ‘The Indian Spice Trail’ as well as writing a series of crime novels.

Leslie discovered that William Morris had his studio and workshop in Queen Square, literally next door to the hospital, which at that time (in the late 1800s) was the birthplace for neurology and the study of epilepsy. It is a mystery that there are no records of Jenny having been treated at the hospital, although her father would have passed it every day.

The Morris family seem to have kept Jenny’s illness private and although there are letters in existence written by William to Jenny while she was having various ‘rest cures’ there are no letters remaining from Jenny to either her father or mother. In Victorian times epilepsy would have been a huge stigma and the usual treatment was to send sufferers away to asylums for life.

Leslie decided to write about what might have happened to Jenny and the effects it had on the whole family, and so ‘Embroidered Minds of the Morris Women‘ (a fictional story, based on facts) was created in collaboration with artists, doctors and academics. This collaboration continues today, led by Andrew Thomas, uniting artists and scientists exploring epilepsy through Jenny Morris and her family’s experience both real and imagined. The story raises issues about epilepsy and its effects on sufferers and their families who still face challenges today. 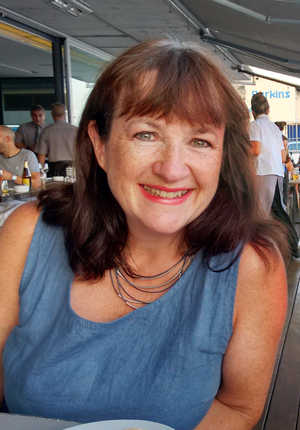 In her design, Kati (pictured left) aims to put across the experience of a seizure as described by Leslie with the Morris story as the theme. A living green wall at the back of the garden represents Morris’ surface designs with formal Yew hedges to the side. The left of the garden is calm and mainly green and white with a feel of the Arts & Crafts era garden, representing pre-seizure state. A visual seizure cuts diagonally through the garden created with planting brown crispy teasels and a mix of brown coloured grasses, Rumex flexuosus and Geranium sanne.

A beautiful oak bench (designed by Toby Winteringham) becomes part of the seizure with steam bent slats and copper rivets. A path starts with William Morris (normal) patterned tiles (designed by Sue Ridge) which then distort and fragment to represent some of the differing types of seizure experiences. The pattern then disintegrates to images representing neural glitches and brain imaging and finally the chaos of a seizure happening to the bench and the planting.

The garden is edged in rusted steel connecting to the harsh brown planting of the seizure. The right side of the garden represents the heightened awareness that Leslie experienced post seizure, with brighter planting.

The garden will include plants grown by students from the charity Young Epilepsy http://www.youngepilepsy.org.uk/

Kati comes from a family of keen horticulturists and for many years worked as a Graphic Designer and Producer in TV before embarking on a National Certificate in Horticulture and Garden Design in 2003. She returns to RHS Chelsea for the fifth time having already won a Gold Medal in 2011 with her co-designer Maggie Hughes for their garden ‘A Postcard from Wales’ and two Silver-Gilts. Leslie Forbes and her husband Andrew Thomas have both been great friends with Kati for over 35 years and so for Kati the garden will have a very personal resonance.

Information on Kati’s design practice can be found at: www.KatiCromeGardenDesign.co.uk

The garden is part sponsored by The Epilepsy Society https://www.epilepsysociety.org.uk