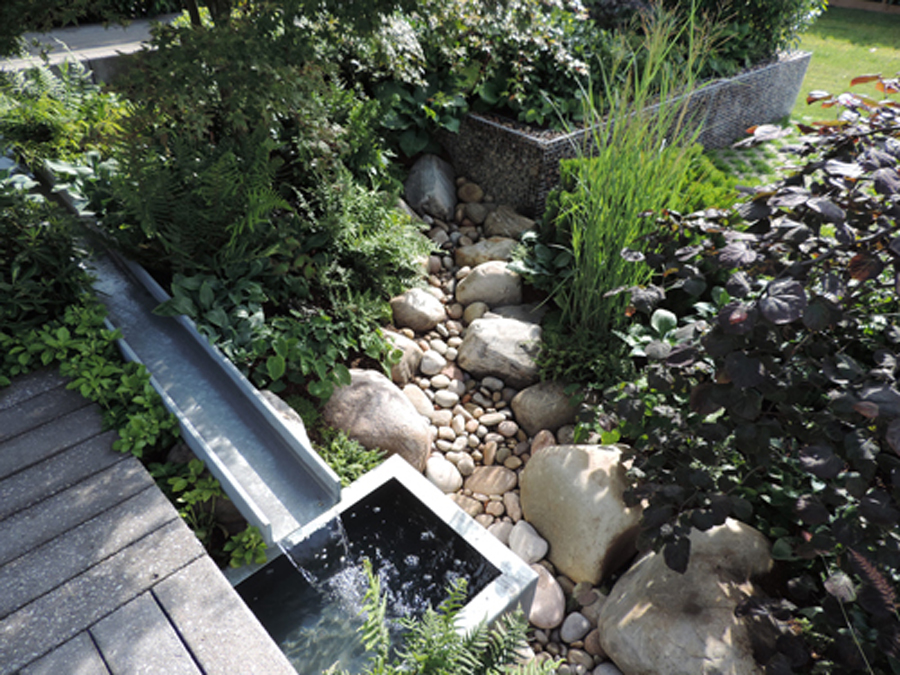 This year (2018) sees the 20th anniversary of the Royal Horticultural Society (RHS) Flower Show Tatton Park, supported by Bruntwood. From larger than life designs looking to the future of our planet to escapism and take-home inspiration, there will be gardens galore to celebrate the Show’s special milestone.

The RHS have released the initial line-up for the three popular garden categories include Future Spaces, Show gardens and Back to Back.

Future Spaces gardens highlight ways to utilise outdoor spaces to better protect our future and this year include Yorkshire based Ellen Krier’s ‘Food for Thought’ garden. Ellen is taking her inspiration from the Government’s 25 Year Environmental Plan and focusing her design on creating a positive vision of what the future might hold for food security. She will offer a futuristic view of farming with each crop selected to provide a significant environmental benefit.

Designer Michael Vinsun’s ‘Future Art Garden‘ is inspired by childhood memories spent in a heathland full of Birch trees which grew tightly together to form a sheltered, Cathedral-like structure. He is influenced by the abstract artwork of Mondrian and Victor Pasmore and hopes to recreate this skeletal structure adding a human-made layer to the concept of natural protection.

‘The Oasis Garden‘ by Birmingham based Dave Green, has been designed to provide much needed shady space for plants and people living in built-up areas in the face of rising temperatures. Created with south facing courtyards in mind, three large pyramid structures will frame the garden entrance to absorb the majority of the day’s hot weather, creating a microclimate and protecting the green living walls and pockets of lush planting nestled safely behind them. 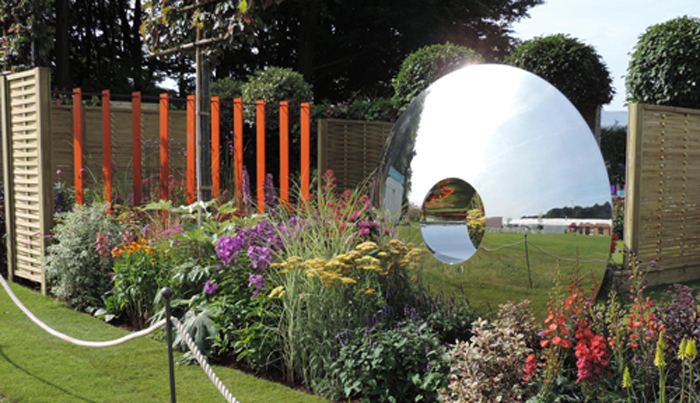 In the Show Gardens category, Cheshire based designer Pip Probert will be returning for her 15th year with ‘Jungle Fever’, created to offer a sense of escapism. At Reckless Gardener we well remember Pip’s first garden at RHS Tatton and each year since we have always looked forward to seeing her Tatton designs. She continually manages to produce something different and fresh and they are always gardens you want to spend time in. This year, her garden will play host to exotic planting including Fatsias and bamboos and will feature a contemporary hot tub and bespoke fire pit at its centre. (pictured above, Pip’s design from 2017 featuring David Harber’s striking sculpture).

Providing the perfect escape on a hot summer’s day, ‘Ginspiration‘, by local designer Belinda Belt, is a fragrant celebration of edible botanicals and pollinators found in the production and flavourings of today’s most popular gin and tonics. Supported by Manchester Gin, the garden features a bespoke copper bar at its centre, covered by a clear canopy supported by four bold pillars, each of which contain shelves filled with herbs and trailing planting to mirror the flavour found in gin.

Keeping with the liquid refreshment theme is Manchester based Leon Davis has teamed up with JW Lees & Co Brewery in celebration of the local staple’s 190th anniversary. ‘The JW Lees: From Hop to Glass Garden‘, draws on inspiration from across the brewing industry and uses slender glass shaped screens to frame the garden, providing a foil for grasses similar to barley and wheat.

In the popular Back to Back category, the 6m x 4m plots that offer a range of take home tips and inspiration, the positive effects of a good night’s sleep combined with vital access to green spaces is championed by scientist and local designer Julie Dunn with her ‘Sleep Well‘ garden.

‘A Place to Ponder‘ by Yorkshire-based Matt Haddon takes its theme from the simple concept of a garden space as a piece of calm and escapism and will use a combination of traditional and contemporary materials. The garden demonstrates that any forgotten space can be transformed into a pocket haven.

‘Arley’s Flowers‘ designed by James Youd from Cheshire and ‘Bee’s Garden: The Penumbra‘ by Oxfordshire-based Briony Doubleday will also feature in the Back to Back category. 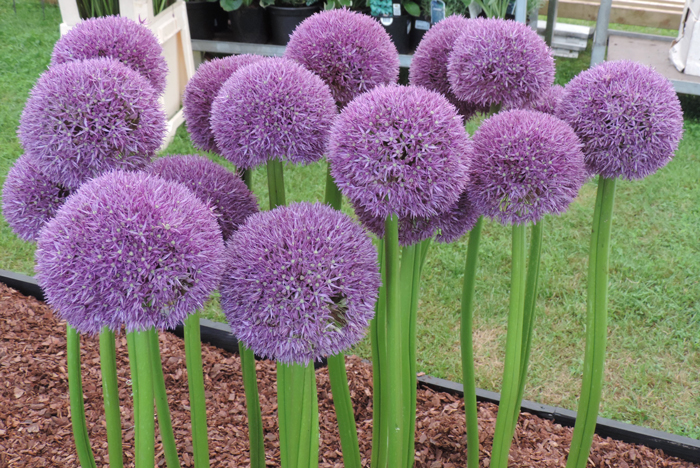 The Show also hosts the final of the RHS Young Designer Competition which this year saw a record number of finalists aged 28 and under shortlisted. This year will mark the 10th anniversary of the Young Designer Competition and in celebration the number of finalists has been raised from three to five. The theme for this year is inspired by the benefits of gardening and the solace of being outdoors and reconnecting with nature in an increasingly stressful and urbanised world. Each design will encapsulate what a ‘feel good’ garden means to them.

This competition has cemented itself as a pioneer of new talent with previous RHS Young Designer finalists going on to create gardens at the world famous RHS Chelsea Flower Show and other recognised horticultural platforms. Tony Woods, who was the winner of the 2013 finals, will make his debut at RHS Chelsea while the 2015 finalist Kate Saville and 2015 winner Tamara Bridge will return to Chelsea with a gin-inspired Artisan garden.

Award-winning designer, Paul Hervey-Brookes, has mentored the competition since 2013 and points out how the RHS Young Designer Competition has offered a vital and exciting platform for young people in horticulture: “During my time as mentor I have seen many promising young designers flourish and go on to peruse successful careers, and I’m delighted to continue to offer support and advice for this very special anniversary year,” he said. 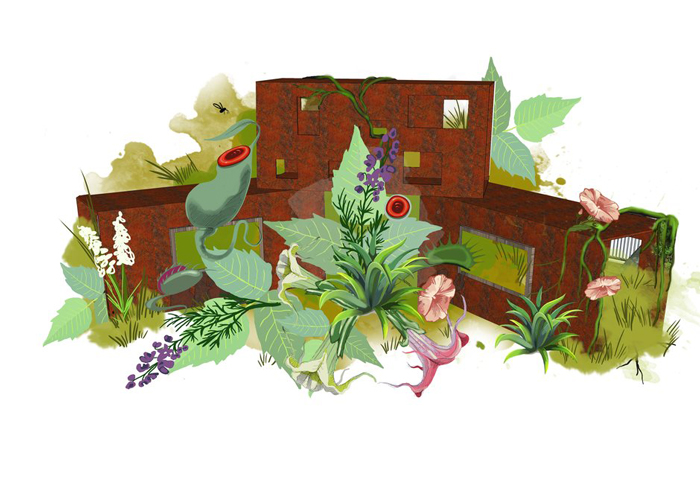 For the first time this year there will also be a ‘Poisonous Garden‘ created as a Show Feature where visitors will be able to explore the gruesome and dangerous nature of some of our best-loved plants. There will also be a hub of activities and interactive workshops and visitors will be able to plant their own fashionable terrarium or create a beautiful flower crown to take home.

RHS Tatton Park Flower Show is the North-West’s very own show celebrating the a wealth of horticultural talent and skill and is a brilliant family day out in the beautiful surroundings of Tatton Park.

The RHS Flower Show Tatton Park runs from the 18th to 22nd July, 2018 at Tatton Park, Knutsford, Cheshire. Tickets and information are available on: www.rhs.org.uk/tatton