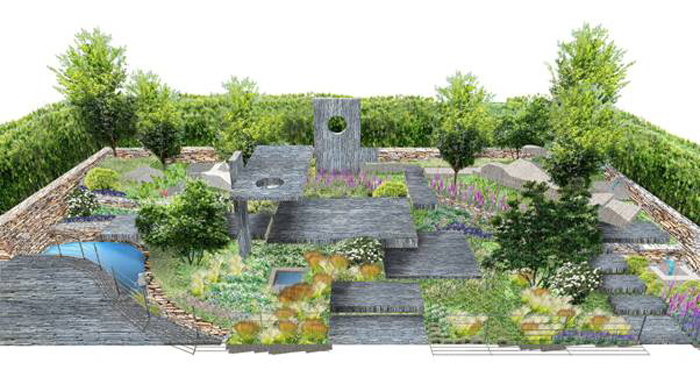 There will be plenty to interest the most avid plant hunters on the Brewin Dolphin Garden at this year’s RHS Chelsea Flower Show (19th to 23rd May 2015).

Designer Darren Hawkes has chosen a number of signature plants including the small leaved elm (Ulmus minor), Delphinium consolida regalis (larkspur) and Viburnum carcephalum to create the garden inspired by the Cornish landscape.

For show time in May Darren hopes that the small leaved elm will be in full fresh green leaf, giving the garden a rugged rural feel because of their corky bark and ridged stems. Darren feels that Elms are very appropriate for the garden as they, like the sponsors Brewin Dolphin, have a real sense of heritage. Elms can be considered by many to be ‘risky’ and Darren applauds Brewin Dolphin for taking that risk on him, a relatively unknown garden designer.

Despite the disease issues in some parts of England, Elms have continued to thrive in the South West of England, where Darren lives and where they still have a noble and worthy presence which he feels ought to be celebrated and seen by the public visiting Chelsea Flower Show. It is considered unlikely that Elms will appear on any of the other gardens so they should be quite a show stopper.

Viburnum carcephalum has a very open habit, is slightly informal and has a heavenly scent. Darren first saw it in a garden he maintained in London several years ago. This Viburnum reminds him of the onset of late spring/early summer and it will be used repeatedly throughout the garden to highlight the sweeping curves of the dry stone wall.

Lovers of Aquilegia will love Aquilegia tower blue, which will be used sparsely as only six of these plants are available and they all come from Darren’s own garden in Cornwall.

This is a subtle plant, dainty and pretty with an old fashioned Granny’s bonnet that self seeded in his garden and despite attempts to find it, it’s currently only available from seed.

Delphinium consolida regalis (larkspur) is a lovely species delphinium grown from seed by Kelways, who are supplying all of the plants for this garden. At just 14 inches high, it’s rather a petite delphinium and will be used throughout to create a ribbon effect also picking up on the curve of the dry stone wall.

This will be a garden of two aspects – from the front it’s angular and modernist but from the side it is much softer, curving and sinuous. Overall the strong colour reference is green with accents of blue/purple and white, creating a very fresh and calm garden.

Darren is also using Macleaya Cordata ‘Kelway’s Coral Plum’, which he describes as a voracious perennial, a garden ‘thug’ that he uses often for its almost Jurassic appearance. With huge leaves, which are soft and floaty, the plant will deliver movement to the garden particularly when windy. The tall plume-like panicles of tiny pink flowers will create a hazy mist effect above large scalloped blue-green leaves. 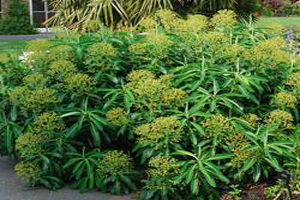 There will also be six Euphorbia pasteurii plants, one of which was used on Darren’s 2013 Chelsea garden. He feels that this Euphorbia is such a wonderful specimen he has lifted it from a client’s garden to bring to Chelsea again. These plants have been specially chosen for their size of leaf and zingy colour.

Darren knows full well the challenges that designing a garden for the RHS Chelsea Flower Show presents. Having designed his first garden for Chelsea in 2013 he learnt a huge amount about what not to do and when to worry and when not! “I now know the importance of forward planning,” he says. “That said, all the planning in the world can fail when dealing with nature so it’s essential to have plans B and C! Designers need to be flexible and it’s imperative to work with the best growers and contractors as they taken an enormous amount of the pressure away from us. With Kelways growing for us and Bowles & Wyer building, I believe that the Brewin Dolphin Garden is in the very best possible hands.”

We wish Darren and the team the best of luck for what promises to be an exciting and interesting garden.