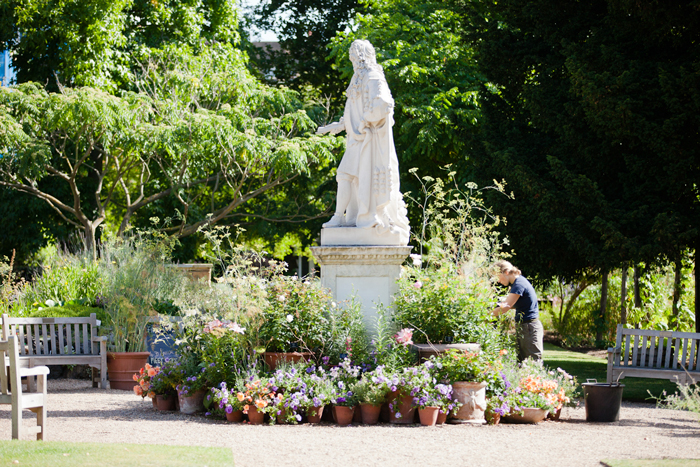 I am ashamed to say that despite hundreds of visits to London I have never once visited the Chelsea Physic Garden. Friends have been telling me for years that I am missing out on something special and so finally, this year, I made a determined effort to include the Physic Garden while I was down at RHS Chelsea.

As I live in a rural area it is easy to forget how important it is for city dwellers to have somewhere where they can relax and touch nature amid the busy and sometimes chaotic pressure of a city. Once inside the walls of the Physic Garden that calm somehow immediately washes over you and you are immersed in a totally different world, where the noise and confusion of the city outside are left behind. 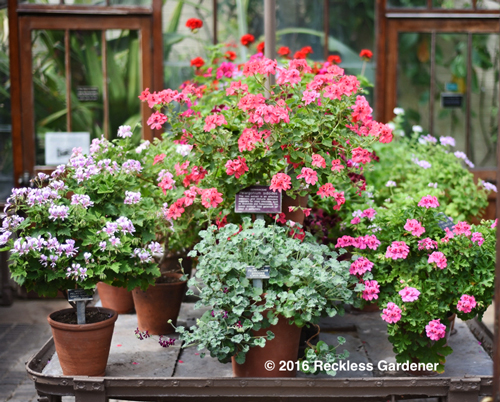 The four-acre site occupied by the Physic Garden has been its home since 1673. Sitting on the edge of the River Thames it has survived numerous ‘land grabs’, and near financial ruin in its history. Thankfully, this wonderful place has survived and is now London’s oldest botanic garden.

As the name would suggest, the garden was first acquired by Apothecaries in order to grow medicinal herbs and obviously the proximity of the site to the River Thames was crucial. John Watts became the first curator and he was responsible for the building of the first greenhouse on the site. 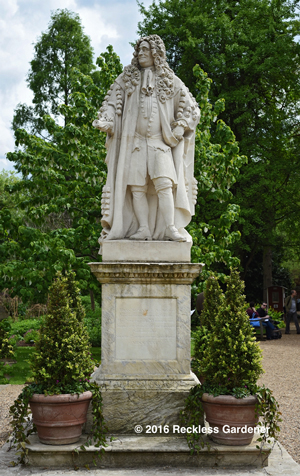 Then in 1680 a young apprentice from Ireland, Hans Sloane, began his studies at the Garden. It was this young man who would one day become responsible for ensuring the Garden’s survival. He travelled to Jamaica to become a private physician to the second Duke of Albermarle, and when he returned to London a few years later he was armed with two things that would make his fortune. The first was a special recipe – for milk chocolate – the second a compound from a tropical tree – quinine! Sloane eventually purchased the Manor of Chelsea in 1722 and of course this included the Garden. By way of thanks to the Apothecaries who had trained him, Sloane rented the Garden to them in perpetuity for a peppercorn rent. That same year Philip Miller was appointed head gardener and served for nearly fifty years, enabling him to establish the garden as a leading centre for botanical plant exchange.

The next head gardener was William Forsyth, who came in 1771. Forsyth was one of the founders of the Royal Horticultural Society and during his tenure created the Pond Rockery at the Garden – believed to be the oldest rock garden in Europe.

Throughout the garden’s history there have been periods of challenge – the early 1800s saw the Apothecaries’ association focused on preserving their own future as an institution. The creation of the Embankment, cutting off the Garden from the River Thames, the threat of a rail line running through it and the Apothecaries struggling to manage it, all caused their individual challenges. By the mid 19th century, medical students and lecturers living in London could use the garden in addition to the Apothecaries apprentices. Women were subsequently allowed to study medicine and this duly increased the numbers using the garden.

By the end of the 19th century, the study of plants had been dropped from the medical syllabus and the Garden was once again facing peril. In 1899 a charity known as the City Parochial Foundation, took over the running of the Garden with a new remit to support students studying botany in London. Another new role commenced in the 1920s when the Garden took on important agricultural research work. 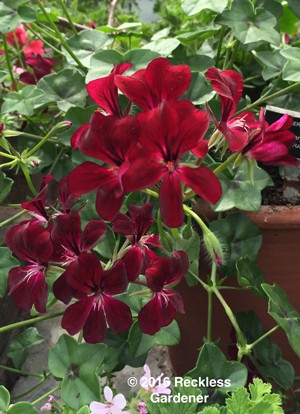 When in the late 1970s the City Parochial Foundation was considering withdrawing from the Garden, employees, friends and associates got together to raise significant reserve funds to create a registered charity. The Chelsea Physic Garden Company was formed in 1984 and from this point visitor numbers began to increase and Chelsea’s ‘secret garden’ was finally available to the wider public.

Today, the Garden is still involved in research, runs its own horticultural trainee programme and welcomes school children and visitors throughout the year. Indeed the Chelsea Physic Garden is London’s oldest outdoor classroom! The Garden is looked after by five gardeners and two trainees as well as a band of willing volunteers.

Walk around this absorbing place and you are introduced to the plants of the world from medicinal plants dedicated to every region of the globe to edible plants and native British species. (pictured right: Pelargonium ‘Choun Cho‘) The woodland garden demonstrates some of the many ways we make use of plants and trees, the cool fernery reflects the interests of Thomas Moore, curator of the garden from 1848 to 1887 and the Atlantic Islands Glasshouse (very much my favourite) offers a cornucopia of delights from Pelargoniums to unique species native to the isolated Atlantic Islands.

On the day of my visit it was very evident how popular the Garden is with both Londoners and visitors alike. There was a relaxed atmosphere as people enjoyed lunch and strolled among the fascinating garden beds. There are plenty of seats so that you can sit and take in the vast variety of plants in the Garden and I am sure there are several quiet corners where regular visitors find their favourite spot.

Curator of the Chelsea Physic Garden, Nick Bailey, has written an excellent guide, simply entitled ‘Chelsea Physic Garden’, providing a fascinating insight into the Garden’s history and current collections. It makes a perfect memento of all that this secret garden has to offer.

You can become a Friend of the Garden and help preserve this historic place for future generations – details are on the Garden website. – www.chelseaphysicgarden.co.uk

Also on the website are details of opening times, (see below for 2017), events and visitor information. There is disabled access to the garden through the Foyer at 66 Royal Hospital Road while access within the garden is via gravel and grass paths. 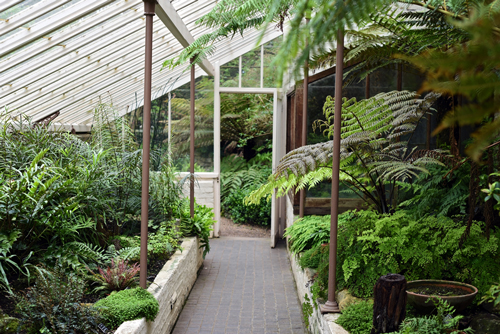 There is a range of family activity events as well as lectures, teachers’ evenings, walks, talks and workshops. The Tangerine Dream Café serves a wide range of fresh homemade food including light lunches and afternoon teas. The café is open March to October with additional winter openings for the Christmas Fair, Festive Shopping days and Snowdrop days. The Book & Gift Shop is the perfect place for buying gifts, picking up seeds or specialist books and is well worth a browse.

Throughout all the challenges and travails Chelsea’s ‘secret garden’ has survived and evolved to become the important educational facility that has always been at its heart. Long may this continue and long may we be able to visit this unique and special garden in the heart of London.

Opening hours for 2017 will be 31st January to 31st March and 31st October to 15th December – Garden open Monday to Friday 11am to 3pm. 2nd April to 29th October, 2017, Garden open Sunday, Tuesday-Friday 11am to 6pm or dusk if earlier. Please check website for current information and events.