The plants, which are new to the mass market, having previously only been available to specialist orchid aficionados, will carry the RHS AGM logo when they go on sale in Marks & Spencer and Tesco.

Supplied by Double H Nurseries, the two orchids secured the AGM in September 2016 after a review and vote by the RHS Orchid Committee.

By including the logo, which is already widely used on plant labels and websites, Double H Nurseries hope that customers will make their purchase confident in the knowledge that the plants have been assessed by the charity against five key criteria:

•Excellent for ordinary use in appropriate conditions
•Available for purchase
•Of good constitution
•Essentially stable in form and colour
•Reasonably resistant to pests and diseases.

Phalenopsis ‘Kleopatra 4’ (illustrated banner above), is a pretty, robust and resilient orchid with subtly individual markings that mean that each plant is unique. Boasting spots, which are not normally seen on mass market orchids (usually mass market orchids are striped or plain), Phalaenopsis ‘Kleopatra 4’ has two flower spikes, which means it will produce an abundance of large creamy coloured flowers with intense deep purple spots that measure 7-8cm across. 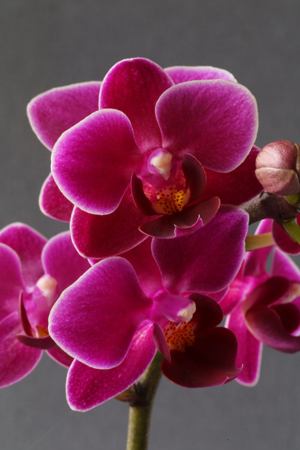 Speaking about the award, RHS Trials Development Manager, Mark Heath, said: “Orchids are the most popular houseplant in the country and as such may be the first plants people buy. With that in mind, the RHS and nurseries want to ensure that customers have as great an experience as possible with their plants – that’s why we assess them on their behalf and if deserving, give them the RHS Award of Garden Merit.”

Unlike other RHS plant awards, the AGM is subject to regular review, to make sure that every plant still merits its place on the list.