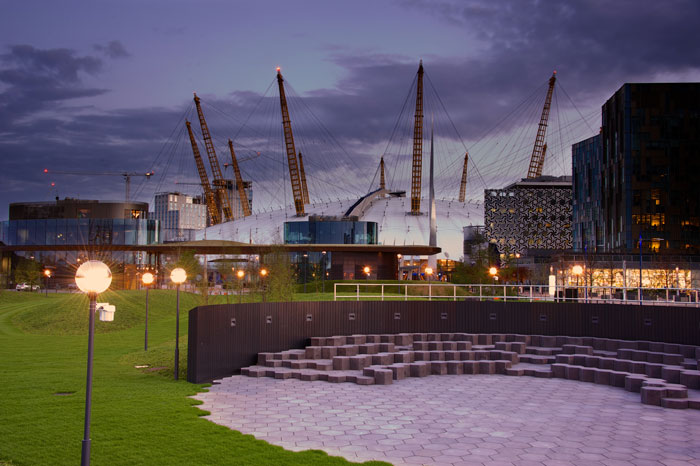 Nestled against a striking architectural backdrop, The Peninsula Garden features a succession of sculpted green mounds, wildflower banks and London’s newest orchard, alongside a modern amphiteatre, inspired by the geometry of the Giant’s Causeway.

The design concept has drawn on the nautical and industrial heritage of the site, exposing the forms of the original mud flats and its distant history as London’s market garden, to give the space a strong sense of place.

Visitors to the park will experience a ‘carefully cultivated wild garden’ managed by a resident Head Gardener to adapt to the changing seasons. Thomas Hoblyn explains plants have been chosen to acknowledge the history of the Peninsula: “In the 16th century it was drained grassland,” he says. “Then a market garden and orchard. More recently it became industrial land colonized with a mix of persistent natives and urban escapees. There’ll be a flurry of apple blossom in Spring, bee-friendly wildflowers in the summer and autumnal fruits, hips and haws.” 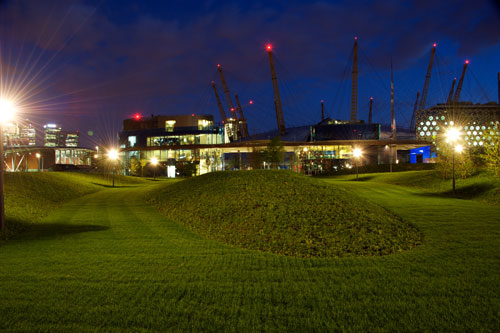 Alys Fowler explains that there are no set routes around the park: “We actively want to encourage visitors to play with the space and determine their own paths and views and the pleasure they get from the garden. We would love to see people climbing the grass mounds, enjoying the different views and creating their own desire lines as they move about the space,” she says.

The park’s amphitheatre will offer a diverse calendar of events and the market garden will supply produce for the kitchens of Craft London, Stevie Parle’s new restaurant.

Thomas and Alys met as fellow students at the Royal Botanic Gardens, Kew. The Peninsula project if their first foray into the world of commercial landscape architecture. Tom explains: “Alys and I have worked together on a number of creative projects where opposite poles were needed. Despite our different outlooks, we work very well as a team, exploring routes that neither would travel solo. The three-way collaboration with Tom Dixon’s Design Research studio has been inspiring, introducing us to new creative thinking and a fascinating world of unexplored materials.”

The Peninsula Garden is also the first landscape project that Tom Dixon’s Design Studio has undertaken. “The opportunity to work in landscape, rather than within an architectural space, has challenged us to think on a different scale and provided us with a new palette of materials that change with the season,” says Tom Dixon.

All photographs are © Thomas Holbyn