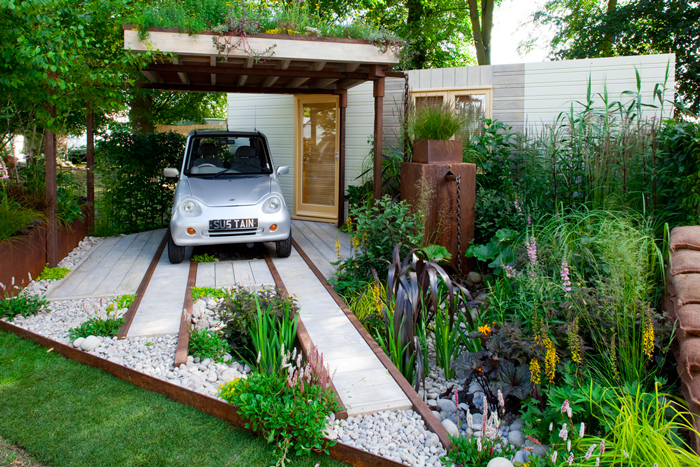 Gardening charity, the Royal Horticultural Society (RHS), is calling on the nation to make efforts to conserve rainwater in our gardens to help mitigate the impact of flash flooding, writes Sandy Felton.

Recently, torrential rain and thunderstorms caused flash flooding in parts of London and with increasingly wet summers, the need for flood control will become more crucial.

RHS chief horticulturalist, Guy Barter, points out that some people don’t realize the massive role that gardens play in reducing the risk of flooding: “Rainwater needs somewhere to go, so if it’s not soaked up or captured in some way, it’ll usually flow into street drains which can’t always cope with the thousands of extra litres in a storm so may result in flooding,” he says.

“Greening Grey Britain is our call on the nation to plant up grey spaces, and by conserving rainwater in our gardens and green spaces we can help reduce flash flooding. On its own one garden with opportunities for rain to soak in or be temporarily held rather than flowing into the street might not make much difference but together many gardens optimised to retain rain water will greatly reduce sudden floods,” added Guy. 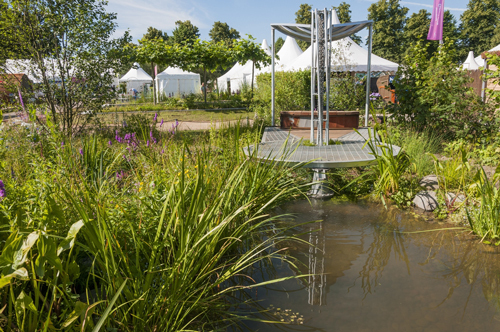 At this year’s RHS Hampton Court Palace Flower Show (5-10th July 2016), a Water Garden demonstrating ways we can use water run-off from buildings and paving to create wildlife-friendly water features in our own gardens, was awarded Best Show Garden. The Gold medal winning ‘WWT Working Wetland Garden’ (pictured above) supported by the HSBC Water Programme and designed by Peterborough-based Jeni Cairns, encourages people to use rainwater to help minimize flash flooding. This is particularly important in urban areas where paving, tarmac and concrete increases the amount of rainwater run-off by as much as 50%.

This year, the water garden category is making a big comeback to RHS Hampton Court Palace Flower Show after an eight-year absence.

Guy Barter’s 12 flood control tips can be found below:

1. On its own one garden with opportunities for rain to soak in or be temporarily held rather than flowing into the street might not make much difference but together many gardens optimised to retain rain water will greatly reduce sudden floods

2. Rainwater can be collected from the roof of homes, garages, greenhouses and other garden structures as long as they have gutters and a drainpipe – even in dry areas, 24,000 litres fall on the roof of an average home each year

4. When watering the garden use water butts first so there is capacity to collect water in summer downpours

5. Plenty of tall vegetation especially hedges and trees catches water in summer on the leaves from which much evaporates before it reached the soil

6. Trees especially dry nearby soil which can then gulp up heavy rain particularly in clay soils where fissures appear in the soil that soon fill with water

7. Avoid leaving soil bare – it compacts under heavy rain and run-off occurs often taking valuable top soil with it.  Instead cover with mulch or sow with a speedy green manure crop such as mustard

8. Containers, even hanging baskets, absorb water each time it rains and covering as much as is convenient of the patio with container plants will go far to reduce run off

9. Use porous paving options where water could run off into the street, with in the case of gravel, plastic or concrete reinforcing cell units to keep the gravel in place and spread the load

10. Allow pond levels to fall in dry periods (with proper care for the welfare of any fish) so they can take up subsequent heavy rainfall

11. Planted or green roofs can also absorb water.  Sheds and other small structures are relatively cheap, practical and easier to ‘green roof’ than bigger buildings

12. Monitor weather forecasts and avoid watering before rains.  Rain won’t soak into saturated soils and is likely to run off possibly in damaging ways.  And you might be able to save a job if the rain is heavy enough to do your watering for you.