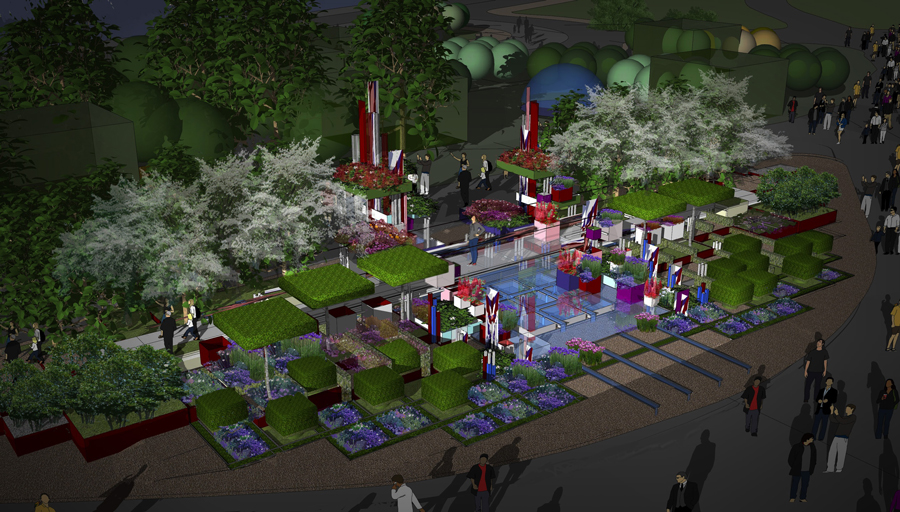 Following on from their success last year when their Chengdu Silk Road Garden was awarded a Silver-Gilt, the ‘Wuhan Water Garden‘, garden takes its inspiration from the historic ability of Wuhan – China’s ‘City of 100 Lakes’ – to manage and control the flood waters of the iconic Yangtze River, using man-made canals and lakes that ebb and flow according to the level of water in the river.

The ‘Wuhan Water Garden‘ is sponsored by Creativersal (specialists in the concept, development and management of modern cultural projects) and marks the fourth garden that Laurie and Patrick have designed for the triangle. As in previous years, the 2018 show garden will be viewed from all sides. It represents a journey through the contrasting natural landscape of China’s Hubei Province and the hi-tech urban environment of the City of Wuhan.

The garden will be constructed using a modular grid system and will be pre-fabricated off-site to ensure an efficient build process on Chelsea’s largest plot. Rising from a grid ‘platform’ base, vertical uprights and a tessellated ‘quilt’ of cubic containers will suspend the Garden’s various elements (forest, urban and aquatic planting, water features) along, around, above and below a suspended walkway that runs the length of the site through dense tree canopies, over the lush forest floor, and as a transparent bridge across the central city and lake.

The water features will be made-up of a series of prefabricated interconnecting tanks on the same grid, representing the natural river and the controlled water management system. In the woodland area a series of cloud misting features will represent the source of the Yangtze River, which flows beneath the forest canopy as a series of meandering ‘mountain streams’, into a series of ebbing and flowing fountains in the central lake that, in turn, feed the canals and rills of the man-made landscape in the hinterland beyond.

It contains a mix of materials including solid timber, bamboo and Corten steel, Perspex and lacquered bamboo.

The planting design will reflect contrasting and rural urban landscapes. It is a celebration of Chinese flora, particularly the flora of Hubei Province. It will include about 75 different species and 5500 plants, falling into three main categories – species native to China and Hubei Province, species with a wide distribution across the Northern Hemisphere including China and garden cultivars of Chinese species.

A stylised ‘forest’ landscape will surround the central lake and ‘city’ representing the forests that once covered much of Huybei province. The woodland includes Betula albosinensis, Acer griseum, Cornus controversa, Heptacodium miconiodes and Acer davidii, with a shrub understory including Ilex crenata Hydrangea sargentiana.

The shaded valleys and streams will offer a range of opportunities for different ground cover plant species and elevated planters will contain a variety of ferns, epimediums and other woodland perennials.

The planting around the ‘city’ zone will be vibrant and contrast with the lush greens of the forest.

In wetland and marginal areas associated with the water feature streams and rills, species will include Iris typhifolia, Acorus gramineus, Equisetum hyemale and Ligularia dentata.

Wuhan is the capital of central China, situated on the Yangtze River at the crossroads of nine provinces with a population of over 10 million. It was recently designated as an environmental ‘super city’ by the regional and central government. Chetwood architects have designed masterplans for Wuhan and Laurie Chetwood’s proposals for the Phoenix Towers received global attention.

I loved last year’s Chengdu Silk Road Garden and feel sure that this year’s water garden is going to be just as sensational.