Russian garden designer Tatyana Goltsova will be making a dramatic debut at RHS Chelsea Flower Show 2016, with The Imperial Garden: Revive, a conceptual ‘Fresh Garden’ exploring the complex relationship between Russia, Ukraine and the UK.

The garden considers what would happen if politics was removed from the world and as humans we all took a step back and focused more on what unites us all. This is explored through the analogy of two contrasting areas in the garden which move from a beautiful and natural area of wilderness through to a man-made, manicured and controlled space. 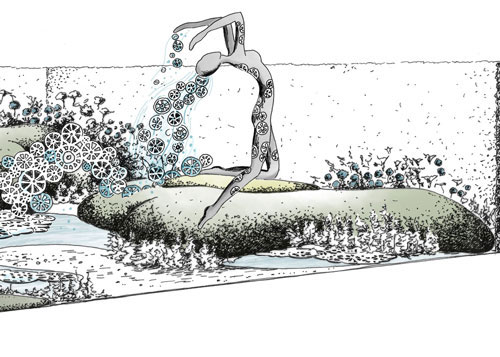 A striking arching bronze figurative water feature ‘River of Time’, will be one of the focal points in the garden. The bronze has been created for Chelsea by Ukrainian Sculptor Victoria Chichinadze, who is also making her debut at Chelsea this year.

Victoria has also designed a shining aluminium lace sculpture which begins its journey through the garden as tree trunks, which interweave up through the natural trunk of a large weather worn, multi-stemmed Yew tree to then become part of the tree’s bow.

Tatyana’s planting palette is restrained with the tightly clipped mounds of yew playing the lead role, supported by delicate pockets of herbaceous perennials including Astrantia, Alliums, Thyme, Ferns and the Rush, Equisetum Hyemale. The plants are being sponsored by the Lorberg nursery in Germany.

Speaking about the garden Tatyana said: “For me exhibiting at RHS Chelsea Flower Show has been a dream, which I have planned for over five years. Chelsea provides a world stage to design a garden which is not just visually stunning, but which also enables me to express a deeper message about how we can ‘Revive’ peace and harmony in the world, if we just stop looking at borders and our differences and instead reflect on the many synergies we all share as humankind. The making of this garden is great example of the real harmony that can be achieved between different nations. I am Russian, Victoria the sculptor is Ukrainian, our contractor is British and our trees and shrubs are from Germany. We have all worked well together, united in our desire to create this beautiful space.”

For the garden build, Tatyana is working with triple RHS Gold medal winning UK contractors Gardenlink. Managing Director Dan said: “We are delighted to be involved in this exciting international garden which stood out as having the potential to be a very special garden.”

The garden’s sponsors, Imperial Garden Ltd is the largest garden centre in Russia. Director General Igor Efimkin commented: “One of our key business goals has always been to help Russian landscapers reach the highest levels in horticulture. So we were delighted to be supporting Tatyana with this inspiring garden at what is undoubtedly the most prestigious flower show in the world.”

Following Chelsea the ‘Imperial Garden: Revive’, will be travelling back to Russia with Tatyana where it will appear at the Moscow Flower Show (1st to 10th July 2016).

I feel sure the ‘Chelsea family’ will give Tatyana and her team a warm welcome and we wish her well for the build-up.