Setting the Scene – A design Masterclass

Sandy Felton talks to leading garden designer George Carter about his new book ‘Setting the Scene’ published to tie in with the bicentenary of Humphrey Repton’s death.

Recently, on a visit to Attingham Park, I had the unexpected pleasure of actually seeing one of Humphey Repton’s famous ‘Red Books’. It was the first time I had seen one, and there it was in a glass case in all its glory so I could finally appreciate at a glance why the Red Books became so famous and were so useful. 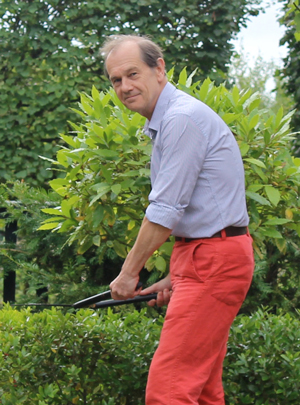 In his new book, ‘Setting the Scene – A Garden Design Masterclass from Repton to the Modern Age‘, George Carter (pictured right) distils his own career of more than thirty years in garden design putting it in the context of the teachings of Repton (1752-1818) and how his own work has been inspired by the great designer.

The result is certainly a Masterclass, and cleverly woven with interesting information about Repton himself and his influences on George’s own career. The result is a series of pithy lessons that will be invaluable to any garden designer or garden owner – indeed for anyone interested in horticulture and design. Following the pattern set by Repton in his Red Books, Carter takes us through the process in meticulous detail, leading us from initial site plan to the finished garden. There are excellent plans and photographs of gardens from his own portfolio, ranging from small urban gardens to large country estates, the world over. 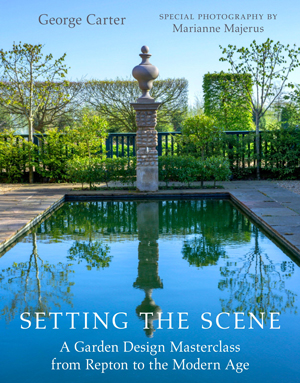 George points out that he discovered Repton at school and bought the Dorothy Stroud book (‘Humphrey Repton’) shortly after it came out in 1962: “I have been fascinated by him and his ideas ever since,” he says. “He had such a cogent way of telling not just what you should do but also why you should do it, both on an aesthetic and practical basis,” he adds.

I asked him to pinpoint what he considered three of the most useful ideas he had gleaned from Repton over his own career: “I think the most essential ones to a designer are firstly dividing a garden of any size into notional planes of foreground, middle ground and distance. This is such a good discipline and helps the eye visually disentangle a small perhaps busy space, as well as helping organise larger spaces,” he said. The second is the notion of relative scale: “Repton noted that you perceive the scale of something by what it is placed next to – especially objects that have specific scale such as a doorway for instance.”

Finally, George points out that Repton had very wide-ranging aesthetic interests: “His views on the effect of daylight on objects (artificial and natural) is really interesting I think and particularly pertinent to artificial garden lighting – not a subject that hand e would have been familiar with before electric lighting.”

While George admits that his style is not particularly close to Repton’s predominantly naturalistic style, he nevertheless feels Repton’s ideas can be applied to many contexts: “I enjoyed working on my own garden most – very far from the look of a Repton garden but it employs his idea of a series of framed views linked by a route – a very scaled down version of what he tried to do in large parks,” he said.

Indeed, this is one of the most important aspects of the book. Repton’s ideas can be scaled down to the smallest urban garden and as I worked through the chapters it was easy to pick up on several aspects I could introduce in my own modest plot.

Although Repton worked mostly on large landscapes and estates, George points out that the prime example of a Repton site, where his ideas work well on a small scale, is his (Repton’s) own Cottage at Hare Street, Essex: “Here he carefully orchestrated the view of the village street carefully framed by his very small front garden,” says George. “At the rear he created a tiny jewel-like flower garden. His interest in the architectural arrangements of gardens and their relationship to the house is particularly relevant to small scale sites. The ideas that views need to relate to the windows and doors of a house is adaptable to any scale.” 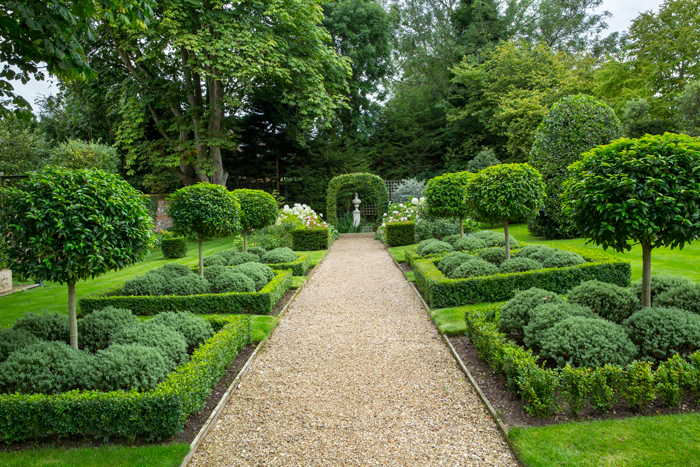 Descriptive of the above point is Blenheim House,(pictured above) Norfolk, a garden within a village setting, where the main garden is walled with no particular outside views and with two fronts that engage with the village street. Similarly, the central London garden that offered an opportunity for a cascade and the author’s own garden at Silverstone Farm, all of which can be found in the book.

‘Setting the Scene‘ is organized under the headings that a Red Book might have contained, showing how most of Repton’s concepts are still relevant today, even when gardens are in the main reduced in scale. So, we find sections including Character, Situation, Walks and Drives, The Pleasure Garden, Ornament, Garden Furniture and Fences and Gates.

Photography in the book comes from several sources, including George Carter himself, but the special photography by Marianne Majerus is just splendid, ensuring that this really is a beautifully illustrated book.

The author has worked on gardens all over the world, including The Royal Hospital Chelsea, Thenford House, (Home of Lord and Lady Heseltine) Albermarle House, Virginia, the Villa Massimo in Rome and at Burghley House. He has won eight Gold medals at RHS Chelsea. His previous books include Garden Space (2005) and Garden Magic (2015).

Marianne Majerus is a regular contributor to many national and international publications, including The Times and the Guardian. Her photographs have featured in over two hundred books. In 2013 the Garden Media Guild named her Features Photographer of the Year. Her photographs in this book are a delight perfectly capturing the mood and sense of each garden.

‘Setting the Scene – A Garden Design Masterclass from Repton to the Modern Age‘ by George Carter, with special photography by Marianne Majerus is published by Pimpernel Press – www.pimpernelpress.com – in hardback at £50.00.

Reckless Gardener would like to thank the author for giving his time to talk about his book. ‘Setting the Scene’ is both a fitting tribute to Repton and also a very special Masterclass from one of the UK’s leading designers.

The publishers kindly supplied a review copy of this book.