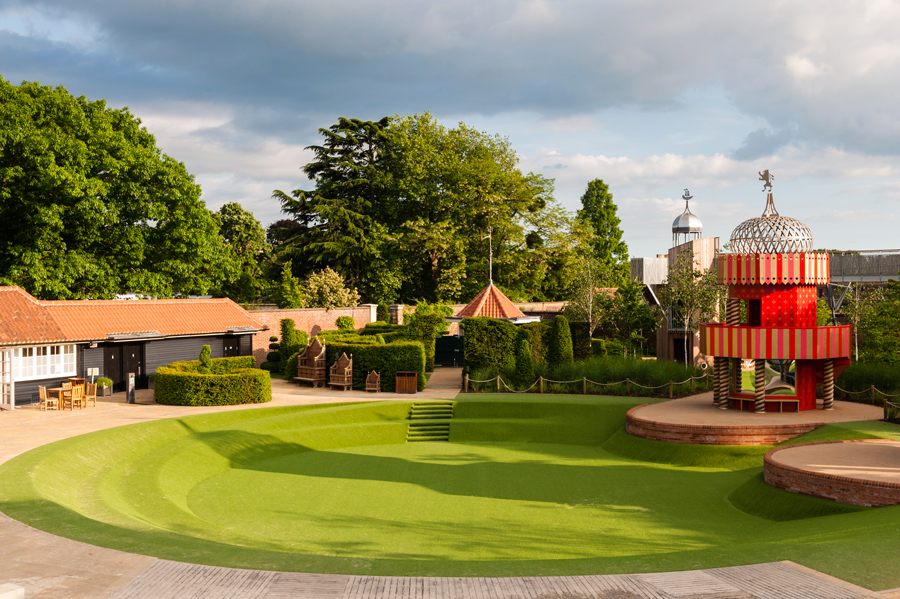 The Society of Garden Designers (SGD) have announced the winners of the SGD Awards 2017 at its sixth annual award ceremony in London.

The most prestigious award of the night – the Grand Award – was presented to Robert Myers MSGD for The Magic Garden at Hampton Court Palace. Matt Keightley MSGD picked up three awards including the distinguished Judges’ Award for his eastern-inspired Tyre Hill House Garden and visionary Spanish designer Fernando Caruncho was presented with the Lifetime Achievement award.

Robert Myers contemporary landscape, created for the Historic Royal Palace at Hampton Court (banner above) is an imaginative and playful new garden for families, inspired by the rich history of the palace and described as ‘truly magical’ by the judging panel. The garden was also named best Public or Commercial Outdoor Space, with the judges describing it as an ‘exciting, generous and inspirational project.’ 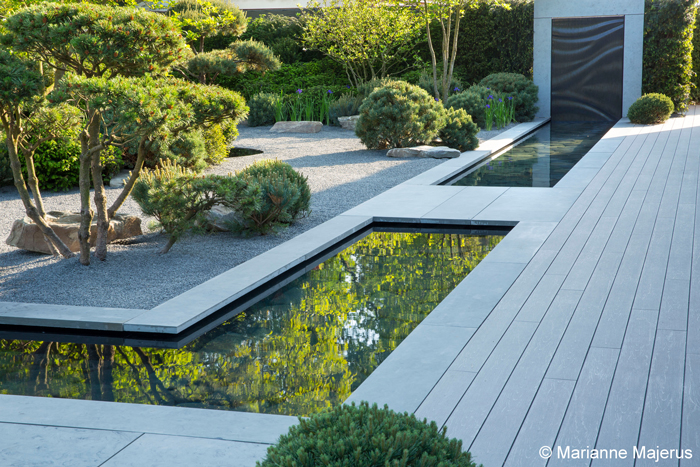 There was a unanimous decision to award Tyre Hill House Garden by Matt Keightley MSGD, the Judges’ Award. (pictured above) Tyre Hill House incorporates a series of stunning geometric pools surrounded by a mix of cloud pruned taxus, pinus heding and bonsai-form pines. The judging panel commented that the design had, ‘a clarity, simplicity and purity that was simply beautiful‘ calling it ‘contemporary, peaceful and very, very accomplished.’

The Tyre Hill House garden also won the Planting Award and was a joint winner in the Medium Residential category with Ian Kitson MSGD, who alongside Matt, picked up the award for his Estuary Garden designed to reflect the tidal movements and sand patterns of the River Conwy, over which the garden looks. The Estuary Garden also received the Hardscape Award for what the judges described as a ‘bold, ambitious and beautifully constructed‘ scheme. 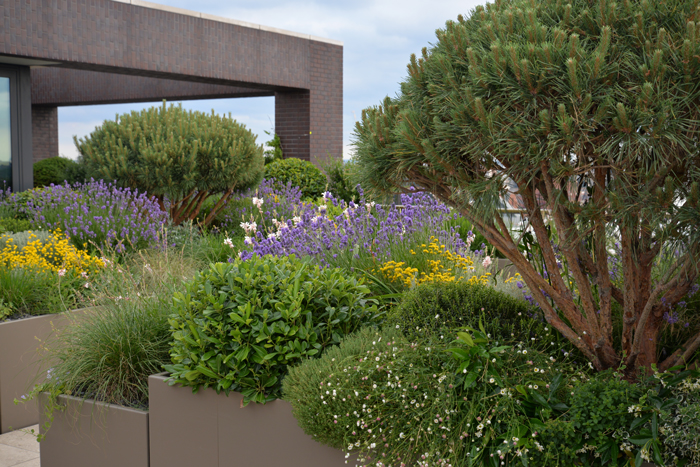 In 2015 Emily Erlam won the SGD’s Future Designer Award and this year has returned to the winner’s podium to receive the Roof Garden award for a stunning scheme on one of London’s largest roof terraces.(pictured above)

Jane Brockbank MSGD and Sue Townsend MSGD were named joint winners of the Garden Jewel award while Helen-Elks-Smith MSGD won the Small Residential category for her Harbour Garden on the banks of Christchurch Harbour in Dorset.

The Big Ideas, Small budget, category was won by Anne Windsor, a newcomer to the awards, who triumphed with an inspiring courtyard at the centre of a four-story apartment building in Manchester. The judges described this as a modern take on the classic inner courtyard gardens found in Paris and Rome.

Host for the evening, Ann-Marie Powell MSGD, had to step aside from her duties to receive the Healing & Learning award for her inspirational Chestnut Tree House Garden at a children’s hospice in Arundel. This incorporates a woodland walk, spaces for therapeutic play and a hanging garden, a design which the judges said was ‘an absolutely fantastic garden‘. 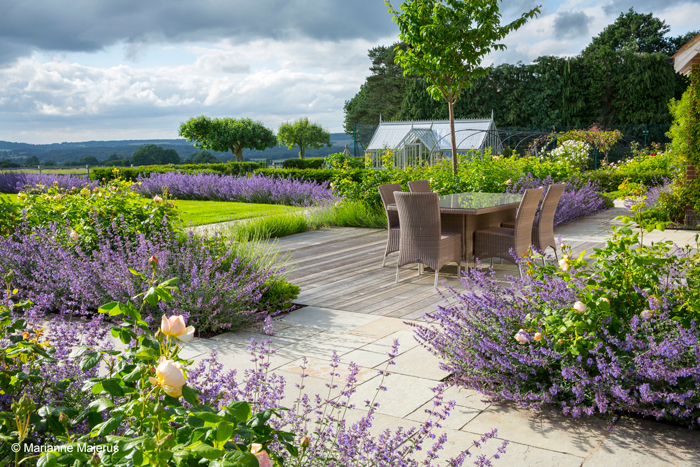 The International Award went to James Basson MSGD, while Debbie Roberts from Acres Wild picked up the Large Residential award. (pictured above) 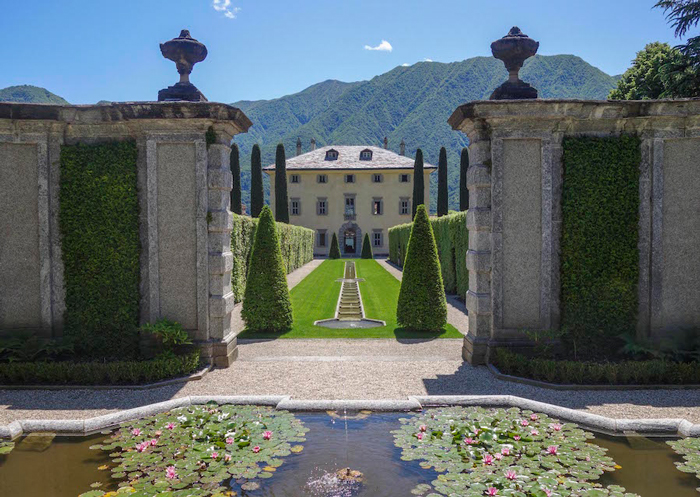 The Historical Garden Restoration award was won by Christian Sweet MSGD for Villa Balbiano, a 16th century mansion on the shores of Lake Como. Building on the surviving framework from the last major redesign in the 1960s, Sweet created a series of ‘rooms’ including an ornamental vegetable garden, a rose garden, a garden of mixed-shrub borders and a shaded vine-walk to breathe new life into the gardens. The judges said it was ‘a beautiful restoration demonstrating excellent attention to detail and a beautiful finish.’ 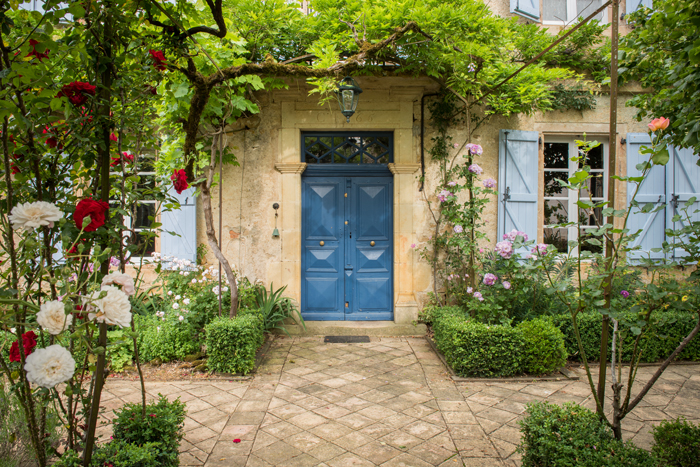 The only award in the competition determined by public vote – the People’s Choice Award – went to Fiona Stephenson MSGD for Domaine de Cambou.(pictured above) In other categories, Carolyn Willitts won the Paper Landscapes award for her project Hale Garden, described by the judges as ‘An accomplished presentation demonstrating a lovely understanding of the seasons.’

In the SGD Student Awards section, Sheila Jack, who came to garden design after a successful career as an editorial Art Director on US Vogue and UK Harper’s Bazaar, was declared the undisputed winner in the Student Design – Domestic, winning the award for two of her submitted projects. Nicky Burridge, from the London College of Garden Design, won the award for Student Design – Commercial, for a project that the judges thought ‘perfectly complimented the façade of the building.’

Every year the SGD present a special award – SGD Lifetime Achievement Award – granted to an individual who has made an outstanding contribution to the landscape and garden design profession. This year, international landscape designer and philosopher Fernando Caruncho was honoured. The SGD Council said: “Since the creation of his first garden in the early 1980s Fernando Caruncho has designed timeless gardens both in Spain and internationally with a simplicity and lightness of touch using geometry, light, water and connection to the wider environment at the heart of his projects. Fernando is an inspirational philosopher, landscape architect and gardener who continues to inspire with his philosophical approach to garden creation and the SGD is delighted to present him with this year’s Lifetime Achievement award.”

SGD Chair, Sarah Morgan, speaking at the awards, commented that the SGD Awards are all about celebrating the very best in landscape and garden design and recognising the incredible talent being brought to bear across the industry: “It’s clear from tonight just how much fantastic work is being done within the sector,” she said. “Each and every one of these awards is richly deserved and I congratulate everyone on their achievement.” 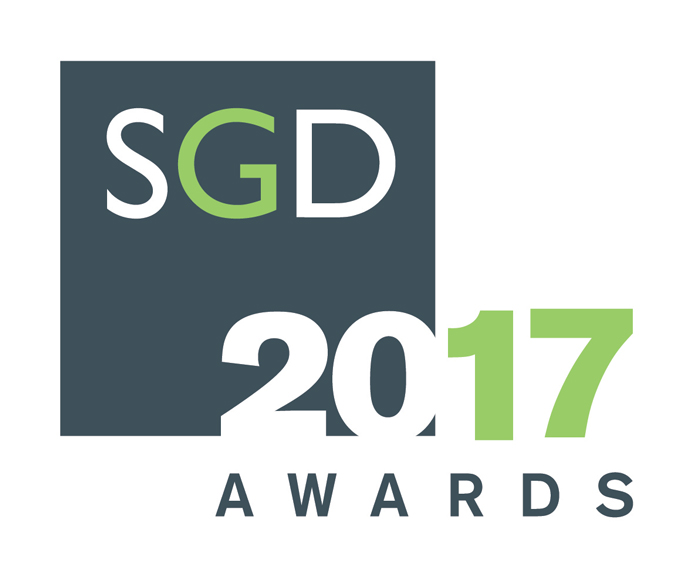 The Society of Garden Designers has been championing excellence in garden design for over 35 years. It is the only professional association for garden designers in the UK and counts some of the UK’s leading garden and landscape designers among its growing membership. It is active both nationally and internationally, promoting its aims through its journal, workshops, seminars, conferences and annual SGD Awards scheme. For more information or to find a garden designer please visit: at www.sgd.org.uk