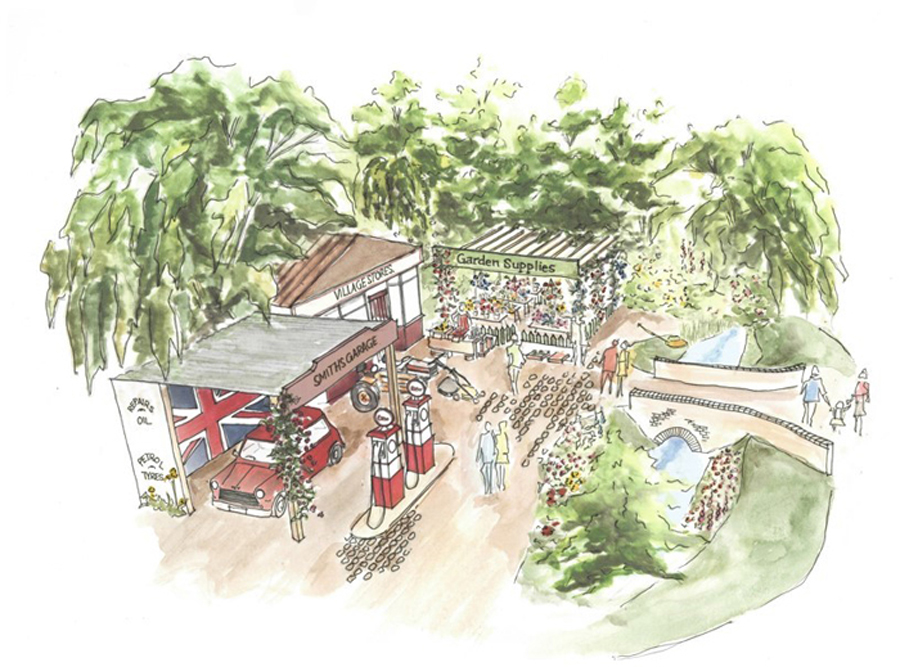 Reckless Gardener catches up with designer Paul Stone as he puts the finishing touches to one of the two feature gardens celebrating BBC2’s Gardeners’ World 50th anniversary at the NEC.

Gardeners’ World Live (NEC, Birmingham, 15th-18th June 2017) will be celebrating the 50th anniversary of BBC2’s Gardeners’ World with two feature gardens this year. One of them ‘The Nostalgia Garden’ designed by Paul Stone will take us back to the swinging sixties when the iconic BBC2 programme launched.

Last year Paul designed a show-stopping garden with his barge in a canal setting and for this special anniversary garden he has chosen a design that the public can walk through depicting a village scene typical of the period. 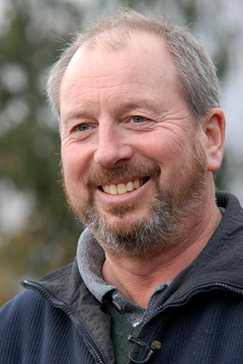 We asked Paul (pictured left) what plants, typical of the era he will be using on the garden: “I’ve looked at horticulture in the late 60s and what traditional nurserymen were mainly selling such as produce and field grown plants, seasonally,” he said. “Post-war austerity was giving way to new home owners with money to spend on their gardens. I’ve a top ten list of plants sold in that period, which includes some basic favourites like Roses, Rhododendron and Berberis. Current favourites are far more Mediterranean like Cordyline, Trachelospermum and Convolvulus. I will be showing all these for comparison,” he explains. The Show garden incorporates a nursery and Paul points out that visitors will be able to see how the plants were actually sold during that period – bedding in newspaper from wooden seed trays and shrubs in cans for example – plastic pots were in their infancy.

Creating a walk-through garden is always popular with show-goers because they can get closer to the plants but there are lots of added considerations and challenges for a designer who chooses to incorporate this in a design: “Obviously safe access and egress are critical and surfaces with non-slip texture are required,” he explains. “Also consideration to somehow protecting the plants from the close attention of the public. Another challenge is the garden fills with people and it’s hard to see it as single piece of work but I love trying to closely connect people to plants and it’s exciting for them to get into a show garden rather than feel excluded from it.” I think we would all agree with that.

I know at one point when I spoke to Paul during construction that he said he was standing in a big muddy hole, so I guessed water would be part of his garden as with the canal boat last year: “Yes we have a stream straddled by a humpback bridge which is the entrance to the garden. Its for dramatic effect to make people feel they are on a journey into the world of 1967!”

Paul admits that the stream is there to show off what they can do – last year people though the canal was always there and he hopes for the same effect this year. “I want it to look like part of the landscape that has been there for years although in fact it is only there for four days.”

Asked how he came into horticulture Paul explains that he was at art college and didn’t really feel he fitted in, then he had an idea that garden design would be right for him and so he started with very basic horticultural training. He really enjoyed the work and eventually took responsibility for instructing others. Paul, whose experience now spans 30 years runs his own Landscape Design and Consultancy Service based in Falmouth, Cornwall. – http://www.paulstonegardens.co.uk

Paul has also had the privilege of having a key role in delivering the landscape at the Eden Project since the early days in 1999. He confesses that he is a British tree and shrub person really, but since living in Cornwall has been fascinated with half-hardy plants like Agapanthus, Palms and wonderful herbaceous plants like Geranium Maderense (Maderia Cranesbill). 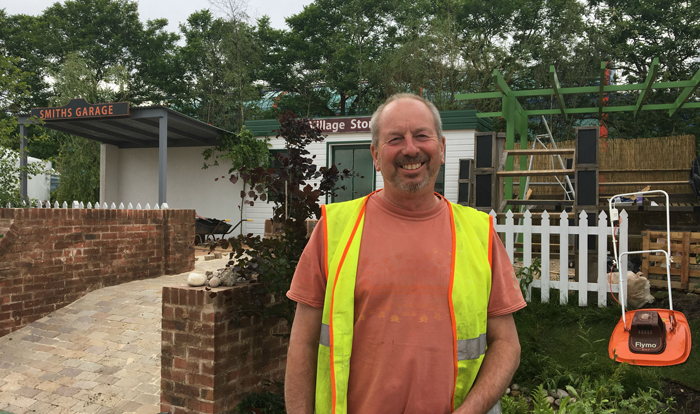 He was delighted and proud to be asked to take on the project of one of the anniversary gardens at this year’s Gardeners’ World Live: “It showed that everyone was very happy with last year’s garden and its great to know people have confidence in you,” he said. “I was less than keen on the brief because I don’’ find celebrating anniversaries very inspiring, however, as it turned out I realised it was a very important period in the development of horticulture and Gardeners’ World has presided over all of this.”

Asked how important he thought programmes such as BBC2’s Gardeners’ World are to the gardening public he is in no doubt that people are passionate about horticulture and that Gardeners’ World still provides a vital role in promoting horticulture and keeping everyone up-to-date with the very best of gardening: “It’s presenters are varied enough to appeal to old and young and they are always expert and charismatic, so this is the most important way for the public to have access to horticulture, on prime time television.”

The Nostalgia garden incorporates a garage and fuel pumps with a classic 1960s Mini Cooper, the first Flymo mower (you can see this in the picture above) was sold 50 years ago and one can be seen on the riverbank of the garden and a garden supplies nursery selling all the plants that would have been available in the 60s.

I am really looking forward to seeing Paul’s garden and all the other gardens at this year’s BBC Gardeners’ World Live, it looks like it is going to be a very special show. Information and tickets please visit: https://www.bbcgardenersworldlive.com