This stunning book, has now been reprinted by Kew Publishing to accompany an exhibition of the same name which runs from February to August 2018 in the Shirley Sherwood Gallery of Botanical Art, Royal Botanical Gardens, Kew, London.

What we have in this new publication, by Coleen Morris and Louisa Murray, is a collection of stunning botanical paintings, presented chronologically according to the date each species was introduced to the Royal Botanic Garden, Sydney and its Blue Mountains Garden, Mt Tomah and the Australian Garden, Mt Annan. The Florilegium truly reflects the diversity of the three Gardens and in itself is a botanical treasure. 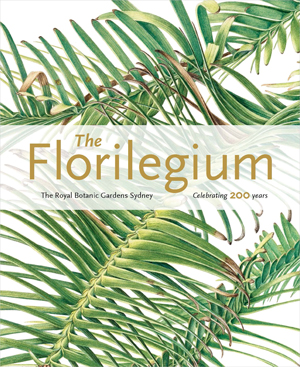 Each painting is accompanied by a botanical description written by Louisa Murray and a historic overview by Colleen Morris detailing the discovery of the featured species, its historic and cultural significance and introduction to the Gardens.

In the foreword, Dr Shirley Sherwood OBE, comments: “The standard of the plant portraits is so high and the text so illuminating that this will make a memorable book.” The preface to the book is written by Dr Brett Summerwell, RBG Sydney Director of Science and Conservation with an Introduction by Beverly Allen, the President of The Florilegium Society at RBG Sydney.

The Historic Overview at the beginning of the book by Colleen Morris is fascinating. We can only imagine how Sir Joseph Banks felt in 1770 when he discovered the flora of the east coast of Australia, and never lost his interest in the young colony, sending botanists to expand both his own and the Kew Gardens collections.

The Overview documents the first long voyage experiment of Nathaniel Ward’s enclosed glass container – the Wardian case – arriving in Sydney on New Year’s Day 1834, with ferns, grasses and mosses from London for the Sydney Botanic Garden. The case was then duly restocked for its return journey with grasses and ferns from Australia as yet only known as dried specimens in Europe.

The drawings, of which there are over 90, are exquisite and simply stunning, showcasing the botanical richness of these Gardens through the eyes of 64 exceptional Australian and international botanical artists including those from the United Kingdom, New Zealand and France.

Colleen Morris is a landscape heritage consultant and in 1992 began a long association with the Daniel Solander Library at the National Herbarium, RBG Sydney. She has a Masters in Heritage Conservation and was National Chair of the Australian Garden History Society from 2003 to 2009. She is also a published author.

Louisa Murray is the Flora Botanist based at the National Herbarium of New South Wales, RBG, Sydney. She primarily works on PlantNET, the database of the Plant Information Systems in the herbarium. She has a wide knowledge of plants and has travelled extensively in New South Wales, Australia, collecting specimens for the herbarium.

This book has kindly been supplied by the Publishers for review by Reckless Gardener.