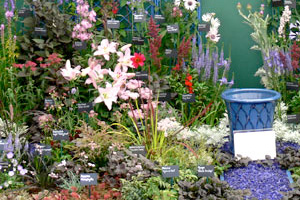 Britain has a wealth of plant societies and in the first of a new series Sandy Felton discovers the valuable work of The Hardy Plant Society.

Almost fifty years ago, in what was at the time a far-sighted concept, a group of gardeners and nurserymen got together with the aim of helping conserve older and rarer plants. They were aware that increasing numbers of fine plants were disappearing from cultivation and saw the need to foster an interest in hardy herbaceous plants. That founding group consisted of Alan Bloom, Arthur Hellyer, Will Ingwersen and John Sambrook. Following a meeting at the RHS, the Hardy Plant Society was formed with Alan Bloom elected as the first Chairman.

The aim of the Society was to make hardy plants more available to gardeners throughout the world and ensure that all garden worthy perennial plants remained in cultivation with the widest possible distribution.

Right from the start there was an enthusiastic reception for the newly formed Society and Local and Specialist plant groups were quickly formed, initially in Nottingham, the Southern Counties and the North West. As time went on additional groups were formed so that now there are more than forty.

Today, The Hardy Plant Society, has over 10,000 members across the globe, who enjoy a wide range of activities as well as helping to conserve and stimulate interest in the growing of hardy herbaceous plants.

Society members are able to gain information about a wealth of both well and little-known plants. The Society encourages the novice, aims to stimulate and enlighten the more experienced and entertain and enthuse all gardeners bonded by a love for, and an interest in, hardy perennial plants.

To this end there are a number of activities in which members can involve themselves. For example, in 1999 the Society re-launched its conservation scheme with the result that around the country there are now over 80 different hardy plants, being specifically grown as a part of the Conservation Scheme by members, which are not widely available.

From autumn through to spring there are indoor meetings with a speaker or demonstrator and during the summer members can enjoy garden visits and coach trips. National summer outings began in 1961 and have evolved into specialist study days – a Summer Gardens Day and an Autumn weekend.

The seed distribution scheme is another area in which the Society thrives. Seed is donated by members of the Society, and with members around the world, little known and interesting seeds are often made available. This excellent opportunity for the enthusiast to grow plants not readily available from a nursery or garden centre is just one of the plus points of being a Society member.

Knowledge and enthusiasm is also fostered through the Society’s excellent biannual journal – ‘The Hardy Plant’ – as well as a range of other publications, including a thrice-yearly newsletter and specialist booklets the latest of which is Penstemons by David Way.

There are over 40 local groups and some specialist plant groups which offer talks, outings, garden visits and of course plant sales. The Society can be seen at the major flower shows across the UK and is one of the first exhibits I head for being a hardy plant enthusiast myself.

Sunday 15th July is the official birthday and local groups have been planning ways to mark the occasion. In March a new President will be elected at the Society’s AGM. Plantsman, Roy Lancaster, will be giving the key-note lecture and Jennifer Harmer will be leading contributions about people and plants that have made an impact upon the character of the Society.

Brian Dockerill, Chairman of the Society, looks forward to an exciting future: “The 50th anniversary of the Hardy Plant Society is time for us to look back over a distinguished past and forward to an exciting future, both within the Society and for perennial plants,” he says. “There have never been so many of these available to us, and membership of the HPS offers wide-ranging opportunities for keen gardeners to share their enthusiasm with one another.”

Members who are unable to attend meetings can be kept in touch by post and the Society has an excellent website – www.hardy-plant.org.uk, which is being re-developed with new additional features as part of the Anniversary Celebrations.

A special 50th anniversary edition of the HPS Journal – The Hardy Plant – will be published in spring to celebrate the birthday year. The annual lecture day and AGM will focus on both the past 50 years and the future of the Society.