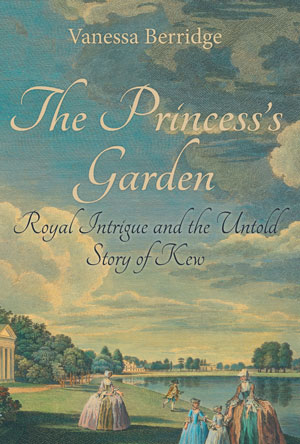 The British enthusiasm for gardening has many fascinating roots – the Empire, trade, the obsession with exotic new plants and the desire of those with influence to create political statements in their landscapes.

In ‘The Princess’s Garden, Royal Intrigue and the untold story of Kew’ Vanessa Berridge does an excellent job in setting the scene in 18th century Britain, when national influence wasn’t necessarily measured by sporting success, musical or artistic influence but through the design of parks and gardens such as Stowe and Kew. A style which was to be emulated first throughout Britain and then increasingly around the world.

The author divides the book into three parts – Part I charting the complex and often volatile state of British politics in the late 16th and early 17th centuries. The demise of the Stuart dynasty on the throne of England and the commencement of the ‘new taste’ in gardening, fostered to establish a new kind of Britishness through cultural artefacts. We are introduced to the two important people who are ultimately to be responsible for the creation of Kew Botanical Gardens, His Royal Highness the Duke of Cornwall and Edinburgh, (Frederick Louis, eldest son of George II) and Augusta of Saxe-Gotha who became his wife.

As the author points out there was nothing new in the idea of the landscape ‘being used as a political canvas; gardens, although places of refreshment and leisure, had also always been invested with symbolism and were spaces where philosophical ideas could be aired and political points made.’ Taste is seen as a key means of expressing ‘both artistic discernment and moral value’ – perfectly embodied at Stowe in the work of Lord Cobham. Although there are today few physical traces of Frederick’s endeavours at either Kew or Cliveden, his work at his first home Carlton House and then at Kew did make a permanent mark on the future of British horticulture.

In Part II we follow the early marriage of the couple and glean something of the difficult relationship Frederick Louis had with his parents George II and Caroline of Anstack. The couple’s meeting with John Stuart, 3rd Earl of Bute, in 1747 was to have a profound effect on both their relationship and the creation of Kew. Augusta’s lifelong association with Kew Gardens and that of her husband and their close friend Bute, would prove to be one that changed the face of British gardening for ever. 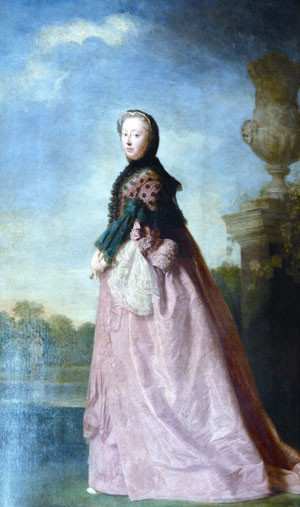 In Part III the author takes us through the early death of Frederick and the political battles of the 1760s with Stowe and Kew seeking to display their conflicting ideologies. Indeed, the author points out that the building programme at Kew, implemented by Chambers, was devised by Augusta (pictured right) and Bute ‘to display their political achievements in the face of fierce fire from Earl Temple and his supporters at Stowe.’

In the 1760s, while Augusta and Bute built and developed Kew, ‘Capability’ Brown was beginning work next door on the Richmond Garden which George III had inherited from his grandfather. Both gardens would not come under common ownership until after Augusta’s death. Brown created a very different aesthetic from Augusta’s – across Love Lane – as he smoothed the contours of Queen Caroline’s former garden making the landscape more naturalistic.

After Frederick’s death in 1751 his wife’s passion for gardening and that of Bute, political troubles notwithstanding, helped to carry on the work Frederick had begun at Kew. In 1768 the first catalogue of plants at Kew, Hortus Kewensis, listed 3,400 species under their Linnaean names, revealing Kew’s development as a storehouse of international flora and helped by their royal profile the gardens became a mecca for plants and seeds. Augusta’s passion for Kew never waned until her death in 1772. Sadly, apparently she was ‘hissed to her grave’ such was the public’s dislike of both her and Bute.

Looking at the two gardens today one would be forgiven for being ignorant as to the political origins of both, or the horticultural battles that continued during their creation and development. To this end Vanessa Berridge has done us a great service for she painstakingly brings us through what is a fascinating period of horticultural history.

In the Epilogue the author points out that Stowe may have won the pitched horticultural battle but Kew won the war. The fortunes of both gardens over the following 200 years fared differently. The Temple family at Stowe saw their fortunes wax and wane while Kew, despite its attempts to become an 18th century theme park, built on its reputation for botanical excellence. One does not perhaps need to be conversant with the interpretation of the garden at Kew as one needs to be at Stowe where so many of the buildings and vistas depict a deeper meaning.

Vanessa Berridge is the author of the ‘Joy of Gardening’ and was launch editor of The English Garden. She now writes regularly on gardening for newspapers and magazines.

‘The Princess’s Garden, Royal Intrigue and the Untold Story of Kew’ by Vanessa Berridge, is published by Amberley – www.amberley-books-com – in hardback at £20.00. It is a must for students of horticulture and an intriguing read for the rest of us.