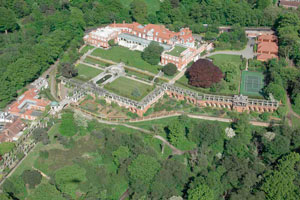 Thomas H Mawson has now become recognized as one of the most successful Edwardian landscape architects but for years his name was relatively unknown. Sandy Felton discovers more about a garden genius who gave us some of the most delightful landscape gardens of the late Victorian and early 20th century.

At the Kendal Archive Centre in the County Offices, there is a very special archive. It is the archive of one of the most successful garden and landscape designers of the Victorian and Edwardian era, Thomas Hayton Mawson, (1861-1933) and it provides an invaluable resource of the work of one of this country’s finest garden craftsmen.

I am somewhat ashamed to say that until about 20 years ago I had not heard of Thomas H. Mawson. I would not have been alone in this for his name was not ‘up there’ with the gardening literati in the same way that Jekyll or Lutyens would trip off the tongue.

It was a visit to Graythwaite Manor, in Cumbria, which aroused my interest and I came to wonder how this garden designer – one of the most celebrated of the early part of the 20th century – had escaped mine and seemingly others’ notice.

One of my favourite places is the garden at Rivington Pike and I have always felt drawn to the remains of this wild garden. When I finally discovered that Rivington too was a Mawson creation, my love affair with his work was cemented. 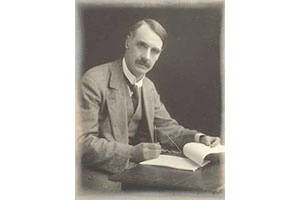 Here was a designer who had worked on large and small commissions, from public parks and country house landscapes to small suburban gardens both in Britain and Europe not to mention the commissions he undertook in Canada and the USA. Here was a man responsible for The Peace Palace Gardens at The Hague and Blackpool’s Stanley Park, a designer who had created gardens for European Royalty and yet his work has only recently started to be appreciated to its full extent.

In her excellent book, “Thomas Mawson – life, gardens and landscapes”, (Published 2009) Janet Waymark asks the question of how it is that the most prolific garden, park and civic landscape maker of the Edwardian era, has remained on the fringes of published appraisal?

It is a good question and her comprehensive book goes a long way to redressing the balance. This first full biography of Thomas H. Mawson makes interesting reading and should be an inspiration to those aspiring to horticulture as a career.

Mawson was a self-taught horticulturist who came from a humble background. He was born in Scorton, a few miles north of Garstang in Lancashire in 1861 to John Mawson, a cotton warper. John was a restless man, which in some respects probably saved the family from starvation during the cotton crisis of the 1860s, when they moved to Lancaster, where John had brothers in the building trade.

John built the Mawson family home in Lancaster and it is in that house that Thomas H. Mawson first became interested in gardening. Eventually, his father moved to Yorkshire where he built another house for the family overlooking the River Greta and set up a fruit farm and nursery.

Thomas was now 14 years old and he loved the fruit farm, it was very different from the work he had done with his Uncle Isaac in Lancaster, when he was 12, where he traced drawings and kept account of building materials – skills which were nevertheless to serve him well later on. At that time it was expected he would go into the design department of the famous family firm of Gillows, but thankfully the fruit farm proved more of an exciting prospect for Thomas and indirectly launched him on his horticultural career.

Sadly, in 1877, two years after moving to Yorkshire, his father died and after a short while his mother had to sell the farm. So in 1879, aged 18, Thomas was sent ‘south’ to find nursery training in the fast-growing suburbs of London. He found work with John Wills, while his two brothers, Robert and Isaac, were taken on by William Iceton, a supplier for Covent Garden Market.

The three Mawson boys were now all employed in the horticultural industry until Thomas, finding himself redundant in 1881, had to search for a new position. After a short period with Kelways at Langport, where he found out all he could about plant propagation, alpines and hardy herbaceous plants, he realized that what he wanted most in life was to become a garden designer.

He gained considerable skills in the next few years working with several nurseries in the south where he came into contact with fashionable garden makers for the middle classes.

However, it was while he was on honeymoon in the Lake District that Mawson, once again finding himself without work, decided to shun the wealthy in the urban south and set up a business in the north. In 1885 he established Lakeland Nurseries in Windermere with his two brothers, as well as his own landscape design business.

The two concerns would run separately but one would contract out to the other. It worked well for at that time the Lake District was attracting many wealthy patrons. The mill owners and cotton brokers, wishing to find a haven from the industrial cities where they made their wealth, came to Westmorland and Cumberland to build large houses which in turn would require well-landscaped grounds.

One of Thomas’ strengths was his ability to create landscapes that utilized his architectural and horticultural skills to emphasise the strong association between built form and the immediate landscape. In Cumbria he designed several gardens including, Rydal Hall, Graythwaite Hall, (then in Lancashire) Langdale Chase, Windermere and Holker Hall, near Grange-over-Sands.

Eventually, Thomas was able to expand the business by opening an additional office in Lancaster. He became a leading practitioner of the emerging profession of Landscape Architecture as his reputation for garden, park and civic space commissions became known.

Janet Waymark describes Mawson as always being on the move, cigarette in hand, making friends, surveying sites and working up ideas until illness slowed him down in the early 1920s. She stresses the strong family contributions that enabled him to work on small and large commissions, eventually across the world, so cementing a thriving business.

I suspect that for me, it is Mawson’s acceptance of the Arts and Crafts Movement as the obvious ambience of his gardens that proves so captivating. Good craftsmanship, dry stone walls, careful planting, linked terraces, careful brick and tile design and oh those balustrades and pergolas.

Mawson’s book “The Art and Craft of Gardening Making” is a classic, first published in 1900 with four further editions up to 1926. It established Mawson as a garden architect and from then on commissions expanded. By surveying the land himself and observing the influences that shaped it, he was able to assess its potential to produce scale drawings to illustrate his ideas.

Thomas H. Mawson & Sons became the pre-eminent firm in the late Victorian and Edwardian period both in the UK and abroad, taking on a broad range of commissions for local authorities, wealthy landowners and industrialists. Perhaps his most important private client was the soap magnet William Hesketh Lever (1851-1925). Thomas designed Thornton Manor, Lever’s Cheshire home, Rivington Pike, and the gardens for Lever’s London home, The Hill, Hampstead. The Hill Gardens are among the most complete of the surviving Mawson schemes, developed from 1905 until the early 1920’s, and featuring a pergola on an heroic scale.

His trademark terraces, usually adjacent to the main house and sometimes at lower levels, allowed views of the surrounding hills and countryside and although sadly many of his gardens have disappeared, or been redeveloped, there are still plenty of examples to savour and enjoy. His importance now recognized, several of his gardens have undergone or are undergoing renovation such as the recently restored garden at Rydal Hall in Cumbria, and Rivington’s hanging gardens. Other signature features of his gardens often included timber pergolas with stone pillars, sweeping steps and carefully placed garden ornaments.

Thomas H. Mawson died in 1933 and is buried in Bowness cemetery, overlooking Lake Windermere and the hills beyond – familiar to Mawson, who was able to design so many gardens that sat comfortably within this landscape.

The practice continued to flourish after his death under the direction of firstly his eldest son Edward Prentice Mawson, and latterly his grandson, Thomas Prentice Mawson, until it ceased in 1978. Another son, John, moved to New Zealand, becoming Director of Town Planning for that country.

It is not until you read the comprehensive list of Mawson’s work and commissions at the rear of Janet Waymark’s book that you come to appreciate the breadth of his genius. Visit one of his gardens or parks and you cannot fail to be impressed by his distinctive garden style. 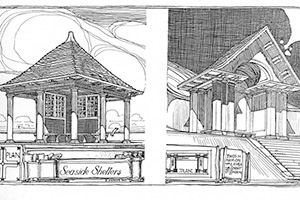 He designed gardens for beautiful arts and crafts houses, palaces and country estates. However, one should not forget that he was an accomplished town planner – Weston-super-Mare, Leigh-on-Sea, the Warberry Estate, Torquay, to name a few. (pictured left: artwork for seaside shelters).

He met the challenges of foreign commissions such as the new city plan for Athens, Greece, the re-planning post fire of Thessaloniki and a grand plan for the city of Calgary in Canada.

Derek Woolerton was the last Landscape Architect employed by the old firm, and together with Sue Dodwell, continues to offer specialist consultancy for the conservation and re-use of Mawson properties and urban spaces. They provide an electronic archive for landscape historians, property owners and their advisors with guidance on the successful restoration and management of original T.H. Mawson schemes. This archive benefits from the extensive involvement and expertise of Mawson’s grandson, Thomas Prentice Mawson, who advises the firm.

Mawson is at last appreciated for what he was – a landscape and gardening genius – now recognized as the leading landscape architect of his time.

You can learn more about the digital Mawson archive by logging onto: http://www.thomasmawson.co.uk
There is also an excellent article on Thomas H. Mawson by his great-grandson, Chris Mawson at: http://www.shellguides.freeserve.co.uk/Thm/THM.htm
The archive relating to Thomas H. Mawson, established by the Cumbria Archive Service, can be located at their offices in Kendal.
This archive consists of plans and drawings as well as glass plate negatives and photographs, however, I understand that it is not fully catalogued.

©All photographs courtesy of Chris Mawson