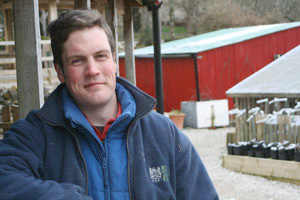 Every day Tom Attwood tweets a video about one of his favourite plants from the nursery he runs with wife Abi in Cumbria. We asked guest writer Susie White to talk to Tom to discover his top ten plants. Tom’s daily tweets and video presentations have proved a big hit on Twitter and Facebook so we are delighted he has agreed that we share his top ten with you.

Susie writes that this has been an incredibly difficult time for specialist nurseries who rely on spring sales to kickstart the season. Growers have been propagating and producing plants since last autumn but some have come up with dynamic ways of keeping people in touch with – and tempted by – the plants that they are growing. Celebrating plants and sharing them via Twitter and Facebook has been Tom Attwood’s response to the situation, whetting our appetites till we can visit the nursery once more.

Tom and Abi run Abi and Tom’s Garden Plants at their Halecat Nursery in South Cumbria. They have also just taken over the Grange Plant Centre, in Grange-over-Sands, just a few miles from the Halecat nursery and like many other nursery owners across the UK just now are preparing the way for re-opening their businesses after a lengthy lockdown.

These are his top ten, drawn from those daily videos of glorious plants:

Plant of the Day May 1st
“This is without a shadow of a doubt my favourite crab apple. It’s Malus transitoria and it’s the cut leaved crab apple. It’s extremely hardy and has that ingrained hardiness because it’s a species that you’d find in the wild. And it has an incredible amount of blossom – there is almost more flower than leaf. Even young trees at this time of year produce clouds of white flowers with a delicate scent. In autumn there are masses of tiny crab apples which are golden yellow, autumn leaf colour is good, and being not too big, these are good trees for the small garden.”

Plant of the Day April 30th
“Tree peonies are very different to herbaceous peonies. They have a woody structure and one of the most widely grown is Paeonia lutea var ludlowii aka Ludlow’s tree peony.

This is a large plant with intensely coloured yellow flowers but, for me, what I really love about this plant are the really interesting and beautiful cut leaves which radiate out of the tops of these woody stems.”

Plant of the Day Sept 19th
“The divine foliage of this special and very tough Fatsia polycarpa from the legendary Crug Farm Plants is a shrub that I planted this spring on the north facing side of our barn. I’ve wanted one for so long having first seen it used by Dan Pearson many moons ago & fell for it instantly. It has deeply cut leaves that go right back to the centre of the leaves, is evergreen, grows quickly, is very hardy and grows extremely well in a container. Though it does flower, it is a superb foliage plant.” See Tom’s video below for a taster of his daily broadcasts.

Plant of the Day Oct 13th

“Sometimes you need something enormous in the garden & Miscanthus x giganteus lives up to its name in every sense. It’s a hybrid Miscanthus which is used as biofuel and we grow it in our jungle garden where we want really tall plants. From a distance you might at first think it’s a bamboo but it is in fact a deciduous grass which you cut back in spring to ground level. In the space of 5 months it grows up to 4 m which is phenomenal. It doesn’t spread and stays in a clump. I really like the way it moves in the wind, it’s constant even on an almost still day, goes a biscuity brown in late season but being a stocky thing, it doesn’t break down fall apart and looks good all winter.”

Plant of the Day Sept 17th
“Here we go, I’m going to put my neck on the line and declare this to be my favourite September flower, strong and bold Rudbekia laciniata ‘Herbstonne’. It’s incredibly tall, gets to 10 feet in height, on the top of outrageously tall stems are deep buttery yellow flowers with reflexed petals with, at the centre, a stocky brown central core to the flower. Once the petals fall away you are left with dark bullet shaped seedheads that float above the other plants. Grow it in full sun and it’s an absolute joy.”

Plant of the Day June 18th
“This lovely daisy is Erigeron Karvinskianus, the Mexican fleabane, also known as the National trust daisy because you often come across it growing in the steps of big historic properties where it loves to grow in the nooks and crannies of stones. If you want to establish it yourself at home, grow it in traditional clay pot and place it close to where you want it to establish. By late summer it will produce masses of seed and you’ll find seedlings the following year. It’s a beautiful flower, starting white and turning pink and that pattern is repeated throughout the summer.”

Plant of the Day Aug 14th
“This is a fabulous underused Verbena, Verbena hastata. I know Verbena bonariensis is a gem but so too is Verbena hastata, shorter, stockier and far more resilient where winter conditions are typically poor. It produces a strong clump with often a good crop of young plants beneath it. The bees are very drawn to it because it has a mass of individual tiny flowers running up the flower stalks. There’s a ‘Spire’ series of cultivars, in white, pink or blue spires) and I particularly like the white. Subtle can sometimes work brilliantly when it’s combined with strong colours.”

Plant of the Day July 26th
“I know this is controversial but – I’m going to celebrate the notorious Crocosmia ‘Lucifer’. Yes, it can take over the world with its vigour, but, contain it within the confines of a pot and you get to indulge in one of the best red flowers out there. I grow it in a recycled tree plastic bucket with the bottom cut out so that it gets moisture but can’t spread. It’s kept under control but you maintain the benefits of its incredible deep red spray of flowers. Very good for insects, it’s such a strong bright red that it stands out against a green background.”

Plant of the Day Aug 21st
“A shrub with luxuriously dark foliage is this rather fine Hydrangea aspera ‘Hot Chocolate’. Like so many dark leaved plants it sets off its neighbours brilliantly with its reddy chocolate brown leaves. Its own distinctive flower colours, too are highlighted so effectively with their pink/purple and metallic blue tones. It’s a classic open hydrangea flower with the real flowers right at the centre and around the outside are the false flowers. The combination of the flowers and leaves creates quite something very beautiful. Good for a dark dingy corner of the garden, it actually likes bit of shade and is easy to proving quite hard when it bounces back with gusto.”

Plant of the Day April 21st

“I first saw this stunning plant when I was a teenager growing in a valley of ancient woodland in the Yorkshire dales and since then have been completely captivated by this special cousin of the Trilliums. This choice plant is Paris quadrifolia aka Herb Paris or true lovers knot, a British wildflower mentioned in Gerard’s Herbal. As its species name suggests, all its parts are in fours. It needs the same conditions as trilliums, so light shade rather than sun.”

We wish Both Abi and Tom every success in their new venture at Grange-over-Sands and to all nursery owners opening up their businesses once more.

All the video presentations for Tom’s top ten can be found on his twitter feed @ABIANDTOMS and his Instagram feed at abiantomsgardenplants – you can visit Abi and Tom’s website at www.abiandtom.co.uk

Susie White is a writer, lecturer and photographer, a Guardian Country Diarist, Garden Columnist for My Weekly magazine and an RHS Listed Speaker. Her regular tweets on all manner of interesting garden plants and topics can be found at @cottagegardener – website: www.susie-white.co.uk