The RHS Malvern Spring Festival is leading the way in top talent for 2017 with six leading designers who are set to create spectacular show gardens at the foot of the dramatic Malvern Hills.

This year will see the return of the 2016 Best in Show winner, Mark Eveleigh and show favourites Peter Dowle and Villaggio Verde. Previous RHS Gold Medal and Best in Show winner, Sue Jollans, returns after a 10 year break and Tim Lawrence and Maia Hall are welcomed for the first time.

Many designers that take their first steps at Malvern go on to become some of the UK’s very best, such as Chris Beardshaw, Paul Hervey-Brookes and Diarmuid Gavin.

Jane Furze, head of RHS Malvern Spring Festival points out that the Show Gardens are without doubt one of the most popular destinations for show visitors: “This year, we are so pleased that the gardens are even bigger than ever before and we’ve added two further feature gardens to the mix too,” she says.

This will be Jane’s first spring show as Head of RHS Malvern and she can’t wait to experience the transformation that the showground will undertake from breaking ground in the middle of April to the completed gardens just over three weeks later.

The six gardens in the show category are outlined below: 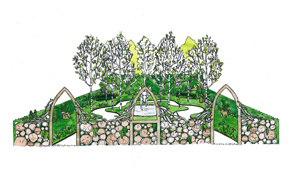 The garden acts as a window to a tranquil scene and looking through the middle oak window, visitors will see a stag sculpture that recreates the Buckfast Abbey logo. After the show, the garden will be scaled up and installed into the Abbey’s grounds in time for the millennium celebrations in 2018. 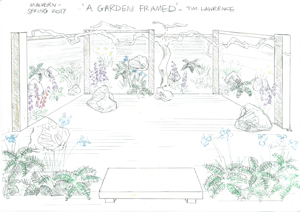 Using a series of four ‘pictures’ framed in oak; each picture contains an arrangement of plants, rock and natural wood to convey the idea that a garden is a form of art.

Tim combines his love of plants and trees, his training in fine art and his love of nature, minimalism and Japanese design. A garden framed seeks to allow visitors to see the garden in a different way while appreciating a sense of beauty and peace.

At One with …. A Meditation Garden designed by Peter Dowle

Peter incorporates a quiet retreat within a larger garden designed for meditation, yoga or simply a place to relax.

The meditation area is a sunken circular area surrounded by planting and water by the side of a large pool, which features three spring outlets to represent the iconic Malvern Spring Water.

The Refuge, designed by Sue Jollans 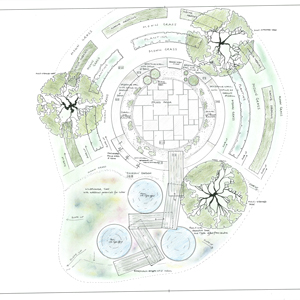 Motivated and inspired by a response to today’s refugee crisis, Sue’s garden reflects the story of ordinary families in war-torn countries and their journey in search of a refuge.

This symbolic garden is accessible via a boardwalk that signifies the journey over water, raised above a carpet of wildflowers, a communal space can be found complete with bread oven and room for children to play.

The space aims to convey the feeling of community and safety. 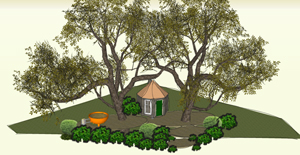 Inspired by the Malvern Hill’s own St. Ann’s Well which was built in the Victorian period, Mark’s garden incorporates the overarching theme of this year’s show but with a contemporary twist.

The Retreat by Villaggio Verde 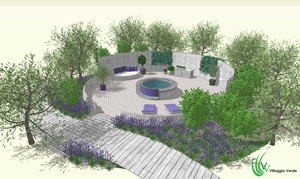 The Retreat is an imagined garden situated in the South of France.

Also featured at RHS Malvern Spring Festival will be a permanent garden created by Jekka McVicar and a Wildlife Garden designed by Jon Wheatley as part of the Grow Zone.

RHS Malvern Spring Festival takes place from Thursday 11 May until Sunday 14 May 2017. Tickets are now on sale. For more information and to book tickets, please call 01684 584900 or visit www.rhsmalvern.co.uk