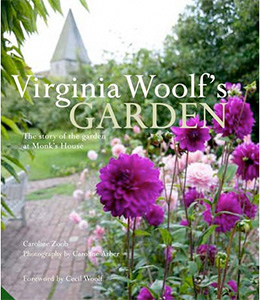 “You cannot recreate Versailles on a quarter-acre of Sussex. It just cannot be done”, Vita Sackville-West told Virginia Woolf in answer to a query that the latter had posed to her friend. The quarter-acre referred to was the garden at Monk’s House, in the village of Rodmell, ‘dropped beneath the Downs’ secluded behind flint walls and with the grey spire of St Peter’s Church rising over its orchard.

In her new book ‘Virginia Woolf’s Garden’, Caroline Zoob tells the story of the creation of the garden, where for 20 years, Virginia worked on most of her major novels in her writing lodge tucked in a corner of the garden’s orchard.

Caroline Zoob lived with her husband, Jonathan, at Monk’s House for over a decade as tenants of the National Trust. Her intimate knowledge of the garden they tended and in many cases re-planted, its history and the influence of the Woolfs – in particular Leonard – shines through every page.

When a writer has lived in a garden, tended it and experienced the day-to-day joys and challenges a garden brings, they are in the best possible position to share its soul with others, and in this delightful book, Caroline shares with us an absorbing account of the creation of a garden in the context of the lives of Leonard and Virginia.

When Leonard and Virginia first saw Monk’s House in 1919, the house and garden were in a very neglected state. Bought as a country retreat, somewhere where they could read, write and work, Leonard’s love of the garden developed into a lifetime passion. Indeed, it was the garden which was the main attraction for him with its cherries, plums, pears and fig trees for the house was almost derelict.

Virginia loved the garden too and although she does not appear to have been an avid gardener herself – there is little evidence of her actually practically shaping the garden – she supported Leonard in his plans and choice of plants, clearly relishing in the success of the garden at his hands. She sometimes bemoaned the fact that any money they had went on the garden first and the house later, but it is clear that she loved the garden as much as Leonard and that it meant a great deal to her.

Living in the house herself, the author at once became familiar with the trials and tribulations Leonard and Virginia experienced when they first moved in. She recalls the fact that the kitchen can still flood as indeed it did on the first night of the Woolfs tenure causing the servants to have hysterics. Caroline brings alive some of the primitive conditions endured by the Woolf’s during their early years of occupation. There was no electricity or running water and no indoor lavatory – residents and visitors had to use an earth closet buried in a group of cherry laurels in the garden which Virginia describes as a “romantic chamber …. down a winding glade.”

Certainly, when Virginia wrote about flowers in her novels, she was using Monk’s House as inspiration. She often describes the garden as a “forest of dahlias and zinnias”, particular favourites of Leonard. His purchase of Pound Croft field at the back of the house enabled him to create a brilliant patchwork of garden rooms, linked by brick paths. He carefully tended the orchard and we are treated to the spectacle of Leonard going out at night with a lantern to catch slugs before they demolished his zinnias and his passion verging on obsession for caring and pruning his fruit trees.

The author asks the question as to whether Virginia was in fact a practical gardener. Despite her long association with Vita Sackville-West there appears little exchange between them on gardening matters. It would appear then that Leonard did most of the planning and maintenance with Virginia contributing to the garden in other ways such as purchasing pots and statues.

hat she loved the garden and found it a haven of peace and security in her often troubled mind is clear. She once wrote: “How happy I am, how calm, for the moment how sweet life is with L. here, in its regularity & order, & the garden & the room at night & music & my walks & writing easily & interestedly”. On another occasion she wrote: “(Tomorrow I) shall smell a red rose; shall gently surge across the lawn (I move as if I carried a basket of eggs on my head) light a cigarette, take my writing board on my knee; and let myself down, like a diver, very cautiously into the last sentence I wrote yesterday.”

The Woolfs rescued the garden at Monk’s House, they enabled it to thrive and become a place of beauty and after Virginia’s death, Leonard stayed on continuing to care for it until his death. Sadly, then followed a further period of neglect until the house was taken on by the National Trust. The garden worked its spell on the author and her husband during their tenure between 2000-2011 and they did much to revitalise the garden, careful not to restore it as a museum piece but as a living garden.

Caroline Zoob comments in the final chapter of the book that although it has been two years since they left Monk’s House, in writing the book she found herself, “… able to reach out in my mind to every corner of the garden, embroidering my way through the flowerbeds as though we had left only yesterday.”

The books contains excellent photographs, enriched with rare archive images and embroidered garden plans, to take the reader on a journey through the various garden ‘rooms’ including the Italian Garden, the Fishpond Garden, the Milstone Terrace and the Walled Garden. I enjoyed the fascinating glimpses into the daily routine of Leonard and Virginia at Rodmell and the way the author weaves in excerpts from the Woolfs’ writing, revealing how important a role the garden played in their lives both as a source of inspiration and pleasure.

Caroline Zoob is an embroiderer, textile artist and author. During Caroline’s tenancy photographer Caroline Arber was a frequent visitor to the house and her spectacular photographs, published for the first time, often reveal the garden as it is never seen by the public.

Apart from Leonard and Virginia, no-one has lived in the house for any length of time since it was acquired by the Woolfs in 1919 and we are indebted to Caroline for her care in bringing alive the characteristics and soul of this special garden.

Published in hardback by Jacqui Small, www.jacquismallpub.com (Arum Publishing Group) ‘Virginia Woolf’s Garden’ – The story of the garden at Monk’s House – by Caroline Zoob is priced at £30 and in shops now.