What to grow in your Victory Garden now 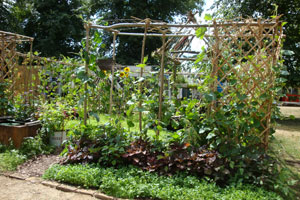 This month, Mr McGregor takes a look at the Victory Garden and what crops to grow over the next few months.

August will mark the 100th anniversary of the outbreak of the  First World War and the Dig for Victory or Victory Gardens campaign. The British public was encouraged to grow their own fruit and veg during the war in order to keep food on the table while import routes were closed.

Since the First and Second World Wars, growing your food has come a long way, evolving from a mere survival tool into a very popular past-time. From growing in raised beds, pots and containers to renting allotment spaces, growing your own has become a great hobby for the whole family. You’ll be pleased to hear that there’s no better time than now to start growing and eating the fruits of your labour.

Vegetables such as peas, broad beans and salad crops are perfect for growing in May, with successional sowings likely to ensure a wealth of harvested yields in the months ahead. Below I’ve created a list of the veg you could be growing in your Victory Garden up until the anniversary, along with a few indications as to harvesting periods. What better way to remember and celebrate those who fought and cared for our families, than digging up the ground and sowing crops to feed the mouths of our families, just as our ancestors did?

Take a look through the aisles of your local supermarket or pop into garden centres such as Notcutts and you’ll find a plethora of inspirational ideas and seeds. These days, growing your own is something everyone can do.

I absolutely love growing food that my family can enjoy, and I’m sure that once you’ve started to grow your own you’ll be just as hooked as I am. It’s a great way to get the family together outside, too!

Tags: growing vegetables, victory garden, what to sow in May