Jack Dunckley is showcasing his award winning garden designs at two of the UK’s leading  homes and gardens shows this year. He will be at Grand Designs Live 2016 (30th April to 8th May 2016) and then at the RHS Chelsea Flower Show with his Urban Retreat design.

Working with Solus Decor, Canadian designers of hand-made fire pits and water features, he has designed and built The Urban Retreat, a contemporary garden stand to compete with any of the garden designs exhibited this year. Designed to provide clients who have a small outdoor space with a solution to outdoor living, the exhibit for Grand Designs which measures 8.5×3 metres will be extended for RHS Chelsea to 12×3 metres.

He is using a premium range of artificial turf donated by Easigrass, which will also be showcased for the first time in the UK. Architectural plantings include bonsai in pots, Italian Cypress and Yucca rostrata, to create form and structure. Jack will be using his signature colour purple throughout The Urban Retreat. 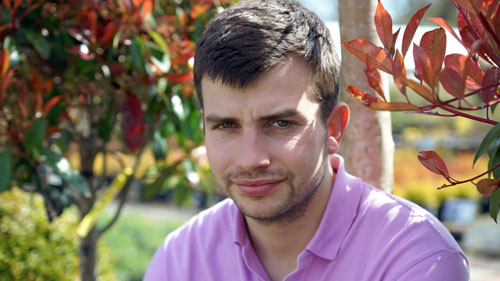 Jack (pictured above) is already an eight time RHS Award winner, including Silver-Gilt Medals at Chelsea and Hampton Court Palace Flower Shows and at 22 is one of most promising young designers.

He runs his design business from Birchfield Nursery in Sussex and has been described by the RHS as an ‘investment for the future’, started designing gardens at 10 years old and won his first RHS award at just 14.

He is already a recognized TV personality for his appearances on programmes such as BBC Gardeners’ World and ITV’s The Alan Titchmarsh Show. He is a young designer who is a real inspiration to all generations of gardeners, regularly giving talks to Horticulture Societies and local groups.

Birchfield is a six-acre family run nursery hosting 500,000 plants in more than 3,500 varieties. Jack leads a multi-disciplinary landscaping team, combining design with construction and horticultural expertise to produce stunning landscapes. At age 22 that is quite something.

He says that being able to design gardens everyday really is a dream come true: “My passion is to produce the highest quality horticultural designs that will give long-lasting enjoyment to my clients,” he says.

He admits it will be strange being at an RHS Show (Chelsea) and not competing in the Show Garden categories, but he is really looking forward to showcasing The Urban Retreat: “It’s been a challenge ensuring the garden fits for both Chelsea and Grand Designs. It will also be trticky manoeuvring it from one show to the other,” he says.

It’s an exciting time for Jack as he will be launching his new logo at the shows: “I’ve always been proud of my designs, but over the last couple of years we’ve worked on more adventurous projects, such as a roof garden in Hampstead, London and a Sheikh’s garden in Dubai, and it really feels like we are maturing,” he says.

After the two shows The Urban Retreat will be transported back to Jack Dunckley’s in Sussex and incorporated into the coffee shop.

Visitors to Grand Designs Live in London, Excel (from 2nd to 10th May 2015) will be able to find Jack on Grand Gardens, Stand G90.