An English garden at Jonsered 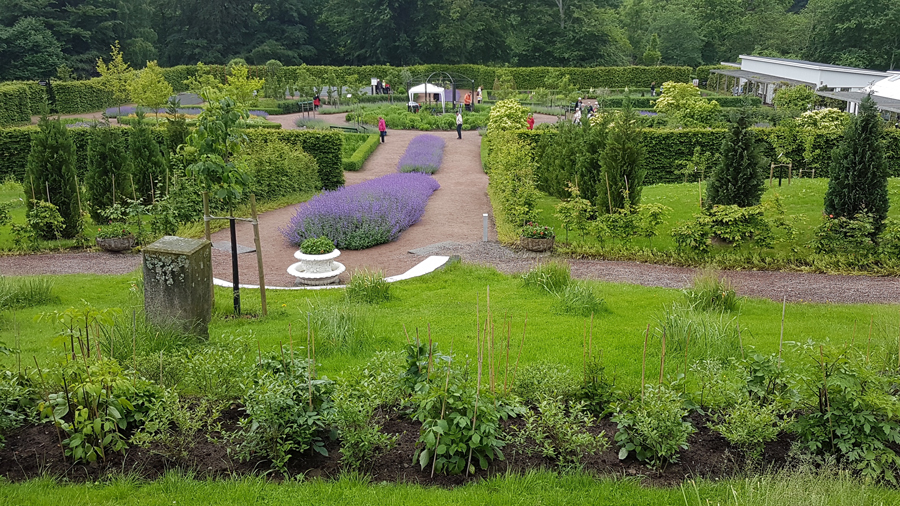 Sandy Felton talks to Susie White about her classic English Garden design at Sweden’s Jonsered Gardens and the dawn of a new, exciting collaboration between the North-East of England and West Sweden.

A very special horticultural link between West Sweden and the North-East of England has been forged thanks to the work of the National Garden Scheme (North-East region) and an English garden designed by Susie White.

Susie explains that the exciting collaboration came about when in 2016 Agneta Olsson and Karin Sodersten from Västra Götaland, visited Northumberland in search of ideas for developing an open gardens scheme in West Sweden inspired by our own National Garden Scheme and the famous Yellow Book.

This regional part of the UK has had a long association with Sweden and County Organiser Maureen Kesteven (NGS Northumberland Tyne & Wear) was delighted to welcome Agneta and Karin. They explained that the local council, Partille Commune, had set the goal of having at least 100 gardens in the Swedish scheme – Gardens of West Sweden (GWS) – within three years.

That visit heralded the start of a collaboration between the NGS in North-East England and the GWS. In Autumn 2016 Maureen was invited over to Sweden to a workshop where she was shown the Manor and Jonsered Gardens, just outside Gothenburg. During the visit Agneta and Karin asked Maureen if it would be possible for an English garden designer to come and create a classic English Garden, at the Gardens (Jonsereds Trädgardår) as an exhibition garden during 2017. So it was that Maureen approached Susie White, who for 23 years developed and ran a garden on Hadrian’s Wall and who now writes a Country Diary for the Guardian about her current garden in Northumberland and surrounding area and is also publicity officer for the NGS Northumberland Tyne and Wear. 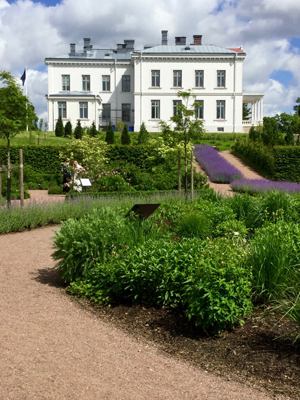 Jonsered Gardens has a heritage dating back to the 1800s when Scottish factory owner William Gibson built a factory for rope and sail making. There is a history of trade and development between Sweden and Scotland with a number of enterprising Scots immigrating to the country, especially after the Jacobite uprising. William Gibson (1783-1857) built on similar ideas that characterized New Lanark in Scotland, an industrial village set up by social pioneer Robert Owen. He created a self-sufficient community – a first example of welfare that was to be continued by his son and grandson. The magnificent mansion and gardens were built in 1868 with everyone welcome to enjoy the summer’s fresh vegetables. As the decades passed and the factories closed down the gardens sadly became a faded memory.

Then in 2010, after exhaustive research by landscape architect Kolbjörn Waern, a new garden was laid out and in a nod to the past, Jonsered Gardens now provide a free interpretation of how William Gibson’s mansion house gardens may once have looked.

Today, the gardens are divided into four quarters – a formal garden, kitchen garden, English rose garden and the exhibition garden – of which the exhibition garden changes year on year with guest designers being asked to stimulate and inspire visitors with new ideas they can apply to their own gardens. In keeping with the philanthropic aims of the Gibson family the garden today also supports an employment project that gives a number of unemployed people horticultural experience to help them find jobs.

During the winter of 2016 Susie drew up her garden plan with a blend of box hedging, yew cones, topiary and perennials including roses, peony, angelica, verbena, salvia, allium, agastache, lupin, astrantia and iris. Sweet pea structures made of willow were included and with reference to more modern English planting she also used a mixture of iris, angelica and grasses in semi-circles. Molinia ‘Transparent’ was chosen to give height behind the benches in the garden, giving a feeling of enclosure and privacy. 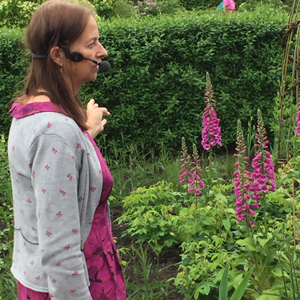 Susie (pictured right) wanted to use grasses in the garden for late summer interest and because of their popularity in the UK in recent years: “Although I’ve included the plants and structure of what I consider to be a classic English garden, it is also something that is still evolving,” says Susie.

“I designed a path at an angle with alternating catmint and ladies mantle so it spills over the path in the English manner,” Susie explains. “I also put in two plants symbolizing the North East of England: Bloody Cranesbill Geranium sanguineum, because it is the county flower of Northumberland and as I live near Hexham, Geranium ‘Hexham Velvet’, which was bred by Robin Moss.”

Susie went over to Sweden in February to visit the garden and to meet up with head gardener at Jonsered, Peter Svenson. The plants were grown in Sweden by nursery members of the GWS, but as Susie points out it wasn’t an easy spring season and the weather in Sweden was just as cold as it was in the UK: “All I did was imagine the garden,” Susie points out. “It is the nurseries who have produced quality plants in difficult conditions and Peter and his team who interpreted the plan and planted it so beautifully.”

Head gardener Peter Svenson is known in Sweden as the driving force behind the organic Rosarium at the Garden Society of Gothenberg and has been a frequent guest gardener on the gardening radio show on Station P4 Göteborg.

There was a special open day in June 2017 when Susie was asked to open the garden with Conny Brännberg, representing the cultural affairs committee of Region Västra Götaland, when they tied together a ribbon symbolizing the uniting of the two countries. Over 2000 people turned up for the event and Susie was able to explain how the National Garden Scheme works in England and how it was set up in 1926. The inaugural day proved to be a whole day of celebrations with music and entertainment by folk group Backafall Band: “It was a lovely day,” says Susie. “Everyone was so friendly and warm, delighted by the garden and enthusiastic about the planting,” she added. 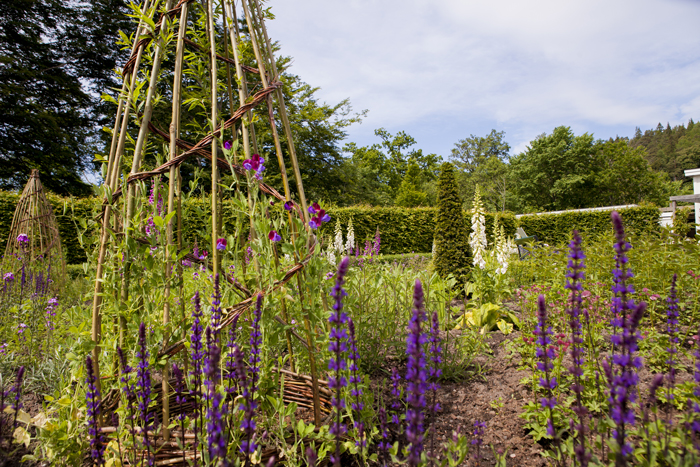 (above) Sweet Pea wigwam in the English Garden

Susie is the first designer from the UK to be asked to do a guest garden at Jonsered Gardens and although the exhibition gardens are only usually there for one season, it is expected that her garden will be remaining for two seasons – a particular privilege.

Gardens in West Sweden unites businesses in the region which manage gardens open to the public for tourist visits. The network’s primary task will be joint marketing initiatives as well as education programmes.

As GWS already has over 35 gardens signed up to their programme in just a year, Susie feels sure they will reach their target of 100 easily. Hopefully, they will enjoy the success that our own NGS does and bring garden visiting to an even wider audience in Sweden.

For information on visiting gardens in West Sweden visit –  http://www.vastsverige.com/en/b/180326/Gardens-in-West-Sweden/
For more information on Jonsered gardens visit: http://www.gothenburggreenworld.com/en/parker/jonsered-gardens-jonsereds-tradgardar/
For information on Backafall folk band see: https://www.facebook.com/backafallband
Susie White can be found at www.susie-white.co.uk and her regular Guardian Columns are at
https://www.theguardian.com/profile/susie-white She tweets as @cottagegardener