An interview with James Alexander-Sinclair 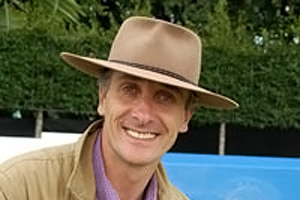 Sandy Felton meets up with James Alexander-Sinclair at RHS Tatton Park and discovers the designer beneath the hat.

I enjoy meeting people without pretension – the sort you’re instantly comfortable with so that within a few minutes you feel you’ve known them for years. Designer, James Alexander-Sinclair fits into that bracket for me, the sort of guy you would enjoy having a pint with at the pub and definitely a companion who would keep you entertained with his wit and slightly irreverent style. The popular presenter of Small Town Gardens, James is no stranger to our television screens. He was one of the lead presenters of the Great Garden Challenge and has appeared in the Curious Gardeners. He is much sought after as a gardening celebrity giving talks and seminars and also puts his excellent communication skills to good use by contributing to a variety of gardening and lifestyle magazines.

Many recognise James by the hat which has become something of a trademark over the years. In fact he first started wearing them simply to keep his head dry while working as a landscape contractor – no affectation there just common sense – and has worn one ever since: “I have been wearing them for ever and ever,” he says in that mellow purring voice. “They are nice and convenient and comfortable – and I can be seen from a long way away.” Which is true as you easily pick him out in a crowd.

His website declares that he spent his youth loafing around and trying out various jobs including Father Christmas, a stab at being a gossip columnist and a Mr Whippy salesman before accidentally becoming a landscape contractor. He candidly admits to me that he started off digging gardens and not really knowing what was going on: “I bluffed my way into doing more and more, and of course the more you do the more you learn. If I didn’t know the answer to something I would go and look it up, and that’s the way you learn. So you start off as a contractor and you learn how to build a brick wall and lay paving and then you start to learn other things.”

It was the ‘the other things’ that he wanted to aspire to and the realisation, that as a contractor, he had more of an understanding for the practicalities of garden design encouraged him further: “I would see some garden designers draw really pretty pictures but with the water going up hill, the practical side was missing. Then as you get older and your back begins to go you start to realise that actually people will pay more for your brain than your body now, so off I went in 1984 on a 10 week design course and it carried on from there.”

His garden for Chelsea in 1999 was “fun and jolly” and then he was approached to do a design for the second series of Small Town Gardens. He worked with Joe Swift and did a garden with lots of chains and rubber in it. Apparently the neighbours complained but that didn’t halt his momentum. The producers realised that here was someone who could communicate and do it well and so he was asked to present the next series.

“The important thing about TV and gardening is that you should never hang your life on television, it is not nearly as important as designing gardens,” he says. How refreshing!

I don’t pin him down with my question as to which designers have influenced him: “I was influenced by everybody but also influenced by nobody,” is his reply. He has confessed, however, in his BBC profile to having lots of scrapbooks full of strange things ranging from pictures of paintings and film stars to architecture and the FA Cup!

“Gardening is much more about where you are doing it – rather than in the style you adopt – you can’t just go and impose a particular style.” He points out. “If you’ve got a modern house you can really put an Elizabethan garden in it and similarly if you own an Elizabethan house you can’t really put something with stainless steel and purple walls in it. It is going to look silly. You have to take into consideration the building and the people you are making it for. That’s the most important thing because although it’s my design, I walk away and leave them with it, so it would be wrong to have a particularly strong style and impose it, it just doesn’t work.”

Here we get into a rather deep philosophical discussion on climate change and why it’s important to make changes in the garden. We both agree that we should keep on gardening the way we enjoy, planting the plants we like – for at the end of the day you can always dig them up if it doesn’t work or you don’t like them: “They are not cute furry kittens,” he says. “You can always chuck them on the compost heap. Do people wear the same clothes year in year out? No they go out and buy something else. It’s the same with gardening. You go out and buy a plant which at the time is exciting and going to work but then if it becomes static it becomes boring.”

But what of his favourite plants? “Oh, I have a favourite plant today, and then tomorrow it will be something different. You never know what it is because it changes all the time. It’s like having hundreds and hundreds of lovers – you just drop in on one or two of them every so often. Just plant what you like; gardening is about having a nice time. If every time you go into your garden and think ‘Oh God, I’ve got to do the gardening’, its time to move to a flat.”

He quite freely admits that in his spare time he gardens! “I have my own garden which I am very fond of and I love it very much, and it’s what I wake up to every morning so its very important. Its rather chaotic and I’ve designed it for minimal maintenance. When I’m not gardening I’m talking to my wife or playing with my children.” He also enjoys fencing as a hobby – as he says “with swords not larch-lap panels!”

James appreciates that he is lucky to be doing a job where, by the end of the day, he will hopefully have made a small part of the world more beautiful than it was before. He quips that someone once told him that landscape gardening was the last refuge of the unemployable confessing that perhaps he loves gardening so much because he wouldn’t be good at anything else. Rather harsh on himself I thought but typical of his wit and perhaps rather the enviable characteristic of not taking oneself too seriously.

He loves meeting people and likes going to places to see what people have done in their gardens. For him satisfaction is where he has given a client a new insight on a little piece of ground thus making their life more interesting and exciting. He likes his designs to be ‘diverse, different and delicious’ but clearly understands that the best gardens are always the simplest.

Recently, he has been working on several private gardens, both large and small including Cottesbrooke Hall in Northamptonshire and Mount Stuart on the Isle of Bute as well as working in the South of France.

You can log onto James’s site at www.blackpitts.co.uk – where there are some absolutely fab pics of his gardens. Many thanks James for the interview, you brought a little ray of sunshine to an otherwise overcast day at Tatton.