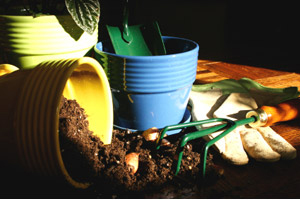 With March being the time of year to begin growing early varieties of potatoes, I have recently received a flood of emails asking me what measures should be taken, in order to tackle a variety of related potato problems.

So I thought I would take this opportunity to share with you how to prevent your yields from being riddled with pests and diseases.

After all, even if you know how to prevent such happenings it’s always good to have a small reminder at the beginning of the growing season. One concern that has been spreading around vegetable plots is potato blight. There is one particular method you can use to prevent such a vicious attack. Blight often strikes from July onwards and what makes this disease such a merciless and scheming problem is that it can sit within the soil waiting for the right conditions to prevail and ambush your crops. The perfect condition for spore germination is warm and humid days. One way to stay alert of the possible risk is registering with the British Potato Council who will send you alerts when your area is more likely to be at risk – http://www.blightwatch.co.uk

Alternatively, you could use the Smith Period, which is a measured temperature of blight incidence. It’s a set temperature and humidity that’s required for blight to become active and is usually a period of two consecutive days when the temperature reaches 10C or above. On each of these days humidity is also greater than 90% during an 11 hour stint.

These measures are extremely useful to commercial potato growers, but we gardeners can also benefit greatly from this information. Although we’re not equipped with the sprays the agricultural industry posses we can apply a vegetable disease control to our yields. Use fungicides containing copper (Bordeaux Mixture or Fruit and Vegetable Disease Control) when wet weather is forecast from June onwards.

How can you avoid potato scab?
Potato scabs are extremely common and cause rough patches on the potato skin. In some cases of a bad attack these patches can cover the whole tuber and ruin a full yield. This occurs predominately on sandy soils, but alkaline soils can aggravate the problem further. Ensure to incorporate plenty of organic matter to the soil and that the potatoes are kept moist when the tubers begin to form. Another prevention method to take is trying your hand at growing some more resistant varieties like ‘Harmony’ or ‘Nicola’.

How can I incorporate pest control and prevent harvesting holey potatoes?
There are two causes of holey potatoes, slugs and wireworms. The damage can be differentiated; slugs tend to cause an uneven edged hole, whereas wireworm damage is a lot smaller and are neat and round holes.

Wireworm pests are the larvae of various click beetles and are particularly common in grassland, making newly formed plots a primary target. Sowing mustard crops are known as a good method of control as they reduce the amount of damage caused by wireworms. However, the reason behind this method is not clear.

As theory has it, the mustard crop root exudes a chemical that minimises the damage caused. Through my personal experience I have found it useful to grow such a crop on a bare area of the plot and digging it in when the potatoes are still relatively young plants.

Mr McGregor
Mr McGregor is a guest writer for Notcutts, a popular garden centre who specialise in all things horticultural and offer friendly advice to all those who require it. Mr McGregor has a vast knowledge base when it comes to growing your own fruit and veg and often shares his experiences through the Notcutts blog.