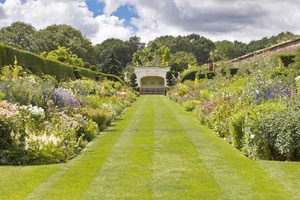 I discovered Arley Hall quite by chance over thirty years ago and have had the pleasure of visiting the garden many times since. I think my attraction to the garden is the fact that it is maintained in the style of a pre-war country house but there is also something else that lingers at Arley Hall and tempts the visitor to return. Arley is an intimate garden, not too large nor too small, where one can wander without feeling intimidated. You can linger to savour the scents of the Rose Garden or marvel at the stunning double Herbaceous Border in mid-summer and there is always some quiet little corner where you can tuck yourself to just sit and drink-in the peaceful surroundings.

There has probably been a garden of some kind at Arley for several centuries but it was the fourth baronet and his wife, Sir Peter and Lady Elizabeth Warburton, who came to live at Arley in 1743 who laid out the first walled gardens and a large pleasure ground of shrubberies and walks on the east side of the house. The fifth baronet, another Peter, enlarged the park and then the newly married Rowland and Mary Egerton-Warburton began to create the area to the west of the house as pleasure gardens and between 1840 and 1860 and without any professional assistance, they designed much of what we see today.

Each succeeding generation at Arley has acted as custodian and each one has made some addition but always with great care to maintain the simplicity and intimacy that is Arley. Today, the present owner Viscount Ashbrook carries on that tradition while developing the hall and gardens for use in the 21st century.

You enter Arley down an avenue of pleached lime trees which lead you towards the clock tower. Once under the tower arch a path on your right takes you to the Flag Garden, made in 1900 by Antoinette Egerton-Warburton as an enclosed area for her own use. This is one of my favourite parts of the garden with its dwarf lavender and climbing Abutilon.

From this quiet sanctum you move to the Furlong Walk, a terrace which forms the main axis of the garden and separates it from the park. Half-way along the terrace one finds one of the best known features of the garden, the double herbaceous border (pictured above). Originally the border stretched in an unbroken line between the yew-hedge finials at either end and then the beds were each divided into five sections separated by yew buttresses which gave it the distinctive look we see today.

Many of the same plants are still used as those originally found in the border although new additions are made constantly. Early summer sees pale blues, mauves and acid yellows making an appearance and then later in the season the borders burst into a riot of colour. The Herbaceous Border was painted by George Elgood in 1889 and his watercolours were reproduced in Gertrude Jekyll’s book, ‘Some English Gardens’ published in 1904. Of Arley Jekyll noted that it was “….. the best kind of English garden of the formal type.”