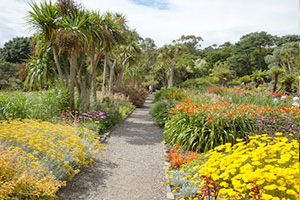 Sandy Felton visits one of Scotland’s jewels – Logan Botanic Garden – and discovers a paradise on earth.

Logan Botanic Garden sits comfortably within the Gulf Stream on the Stranraer peninsula, overlooking the Mull of Galloway.

I knew of its reputation as a plantsman’s paradise and was told that it was worth going the ‘extra mile’ to enjoy all that this unique garden has to offer.

So it was with much anticipation that I finally managed to visit Logan during a gloriously sunny day in August.

To say that I found heaven on earth would be an understatement – this beautiful jewel in the crown sits comfortably in the lovely Galloway landscape and I am astounded that this icon to botanical gardening and southern hemisphere planting seems to remain somewhat of an undiscovered treasure.

The garden forms part of an estate that once belonged to the McDoualls and in the heart of the estate stands the ruined remnants of Castle Balzieland a medieval stronghold of the family. This was eventually replaced by a Queen Anne mansion which still exists but is now not part of the botanic garden.

The basis for the present garden stems from 1869 when James McDouall married one Agnes Buchan-Hepburn who brought lilies, roses and other shrubs and her great passion for gardening to Logan. It was Agnes who is credited with planting the first Eucalyptus here while the McDouall brothers became knowledgeable gardeners, travelling widely to temperate regions to collect their own new introductions. 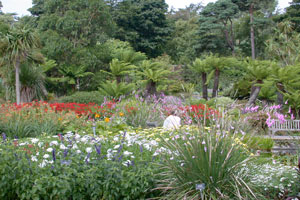 When Kenneth McDouall died in 1945 he left the estate to his cousin, Sir Ninian Buchan-Hepburn but his tenancy was short as in 1949 the house and gardens passed into the ownership of Mr R. Olaf Hambro, who played a major part in restoring the gardens after the neglect of the war years. Following his death a Trust took over the running of the gardens until in 1969 they were gifted to the nation and the Royal Botanic Garden Edinburgh took over.

The heart of Logan Botanic is the Walled Garden, with the romantic castle ruins towering in one corner. The Woodland Garden, which has been developed from open fields in the past 40 years, rises on the south and west sides of the Walled Garden offering the protection necessary from the winds and elements coming off the rugged Mull of Galloway. To the east of the garden is the more sheltered Luce Bay but from the west comes the roar of the Irish Sea, which makes the shelter belt essential for the protection of the tender tropical plants.

This favourable climate has encouraged the cultivation of plants from the southern hemisphere, which now represents the majority of the living collections.

I was fortunate to have the expertise of Richard Baines, the Curator at Logan, as my guide, for his knowledge is awesome and his enthusiasm for this very special garden infective.

We started at the Walled Garden and as soon as you enter it is no exaggeration that your breath is taken away. You are suddenly transported into a tropical paradise, which from spring to late autumn offers you a blaze of colour and air heavy with exotic scents.

Chusan palms, tree ferns, cabbage palms, Gunnera and cordylines strut their stuff while the adjacent borders play host to a brilliant array of half-hardy perennials, many native to the southern hemisphere. These add the vibrancy to the colour scheme and include Osteospermum, Argyranthemum, Gazania and Felicia who fight for attention with salvias, verbenas and diascias.

Come in early spring and the tree-heaths will fill the air with their perfume, come in high summer and discover 30 species of fuchsia in flower, while in autumn the later flowering Eucryphia species will call out for your attention.

The tree fern grove and pond has wonderful specimens of Dicksonia antarctica which are over 150 years old and were believed to have been obtained from the collections established by Joseph Paxton in the Crystal Palace in the late 1850s. Here you will also find clumps of the Chilean bromeliad Fascicularia bicolour – a relative of the pineapple which has a core of bright red leaf base enclosing a central dome of blue flowers.

A particular favourite of mine, Dierama (angel’s fishing rods) find comfortable homes around the edge of the pond, notably Dierama pulcherrimum. Then there is the Terrace, offering wonderful views across the whole garden. The ascent to this is framed by a colonnade of chusan palms, featured in the cult film ‘The Wicker Man’ and on the way up, if you visit in late spring or early summer, you will immediately smell the scent from the white blooms of Rhododendron. The Terrace is home to the red-flowered Australian protea Grevillea rosemarinifolia and Euryops pectinatus, which provides sustained colour with golden yellow flowers from April to August.

There are plants from South and Central America, South Africa, the Atlantic Islands, and Australia and New Zealand. I loved the bottle brushes (Callistemon) and the New Zealand daisy bushes (olearias). There are several endangered species being grown at Logan – which shares a similar climate to that of New Zealand – among which is Olearias O.frostii, from Australia, under serious threat of extinction in the wild.

Another stuning star is the Argentinian shrub Polylepis australis, which thrives beside the west wall of the Lower Walled Garden. A member of the rose family, this plant also holds the woody flowering plant ‘high altitude record’ being reported up to 5,000m in the Andes. It is noteworthy for its dramatic flaking red-brown papery bark and is not to be missed. (pictured left)

There is so much to discover in the Walled Garden that to do justice to any visit you should set aside a day, morning for the Walled Garden and afternoon for the Woodland. We didn’t get time to do justice to the delights of the Woodland Garden which has a Gunnera Bog, (picture below) an area of Australasian collections, A Tasmanian section (which is under development) and a Chilean section.

One of Logan’s most important functions is conservation and around 120 of the species cultivated at Logan are threatened in the wild. Among the most endangered are the beautiful Rhododendron edgeworthii, the purple-flowered leguminous bush Chordospartium stevensonii and as already mentioned the Australian daisy bush Olearia frostii.

In addition, Richard and his team have a rolling programme of refurbishment and this includes the reconstruction every ten years or so of the peat walls. It was the McDoualls who first developed the practice of growing plants on peat walls. The practice uses blocks of freshly cut peat back filled with a peaty loam mixture which creates a specialized environment in order to grow dwarf lime-hating plants from montane regions.

Currently work is taking place to regenerate the rock gully area and an area by the Bistro offers the opportunity to enjoy some local gems native to the Galloway coastline, which are labelled as ‘Local Heroes’ and include the oyster plant (Mertensia maritime), the sea holly (Eryngium maritimum) and other rare species whose only foothold in Scotland is believed to be at the nearby Mull of Galloway.

Projects are ongoing as Richard explained: “In the next few months our latest exciting development , a new victorian conservatory will come to fruition. It will house a collection of plants from South Africa rarely seen growing in the UK. These will include Proteas, Tree Heathers, a pelargonium collection and tender S African bulbs. It will probably be the first ‘all green’ greenhouse in the UK.”

The garden is open daily from March to October, has an excellent Potting Shed Bistro/cafe area, well-stocked and interesting shop, a discovery centre and a range of activities and events throughout the season.

Logan Botanic Garden is really a must-see for anyone who loves gardening as not only will both the amateur and expert find much to educate, inform and enjoy, the unique experience of this tropical paradise is not to be missed. As Richard points out: “Logan is a garden for all to enjoy. Whether you are into plants, music, art or history Logan has plenty to offer. In recent years many new improvements have taken place. If you haven’t visited recently you may be missing out”

Logan is located 14 miles south of Stranraer in the Rhins of Galloway and yes it might be a bit off the beaten track but as I said at the beginning it is always worth going the extra mile to see and experience something special and believe me Logan is special.

My thanks to Richard for an enjoyable, informative and exciting tour of Logan, I will certainly be back to discover the delights of the Woodland Garden and once again experience the very special atmosphere of a very special garden.

Information on the garden can be found at: www.rbge.org.uk