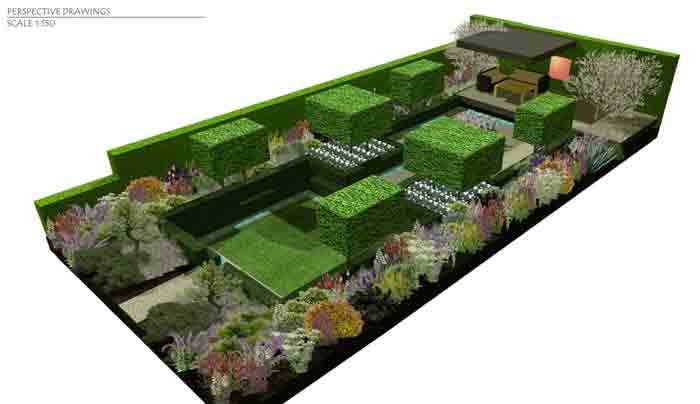 Australian designer Charlie Albone will be returning to RHS Chelsea in 2016 with a garden for sponsor Husqvarna and has set his sights on a Gold Medal.

At the 2015 show Charlie was awarded a Silver-Gilt and he hopes to top that this year with his garden ‘Support: The Husqvarna Garden’.

Charlie is a popular landscape designer and television personality in Australia and is delighted to be returning to Chelsea for a second consecutive year. He has designed a garden for a busy corporate couple living in inner city Melbourne, offering a space to relax, reflect and retreat from the pressures and speed of modern living.

“I’m very grateful that Husqvarna is backing me yet again. It”s a dream come true to be able to take part in a show of this caliber, but it’s also a great deal of work and pressure,” explains Charlie, (pictured left). “Having a brand like Husqvarna onboard means that I’ll have access to the best power equipment to get the job done, as easily and seamlessly as possible.”

Stephen Clark, GM Marketing, Husqvarna Australia explained that they were incredibly proud of Charlie’s achievements in the show last year and excited to support him again in 2016.

Charlie points out that we live in a fast paced and crazy connected world where it can feel almost impossible to turn off: “A beautiful garden is the perfect support system, providing an escape from life’s stresses and encouraging positive thinking,” he says. “This year, I wanted to build that escape on a world stage and design a garden that would relax even the busiest of people.”

The serenity is made possible by the garden’s features – an entrance, which will be flanked by two large specimen Banksia, leads to a protective-feeling sunken lawn. Exotic plants including Leucadendron, Acacia and Protea along with European perennials in subtle purple, white, pink and soft red tones which will fringe it. The 2016 garden will also feature a calming stream of water down the stairs, without splashes or ripples.

Visitor’s to last year’s show will remember Charlie’s exotic planting which enabled gardeners from the northern hemisphere to appreciate some of the stunning plants to be found in the southern.

The 2016 garden will once again draw inspiration from its homeland, bluestone cobbles will be featured along with a floating cantilevered architectural structure with geometric patterns reminiscent of Melbourne’s Federation Square. Also featured will be a striking bronze sculpture created by Victorian Sculptor Will Wilson. Wilson is a veteran of RHS Chelsea Flower Show, having showcased his sculptures in London for the past seven years.