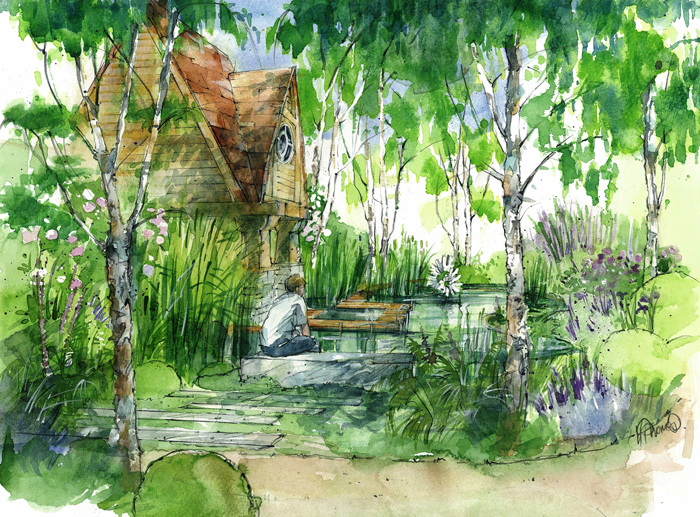 M&G Investments, the sole sponsor of the 2015 RHS Chelsea Flower Show have chosen a quintessentially British restorative retreat as the theme for their garden at this year’s Show and they have commissioned award-winning landscape designer Jo Thompson to create it.

Described as a sylvan themed garden retreat, The M&G Garden will feature a two-storey oak framed building inspired by the writing room of poet Vita Sackville-West at Sissinghurst Castle, a large natural swimming pond edged with water-loving plants and a woodland of river birches, acacias and acers.

In addition to the all-female gardening team Jo will once again work with Roger Platts, (a multiple gold medal winner at RHS Chelsea and twice designer of The M&G Garden in previous years), to ensure that the 2015 garden has only the best trees, shrubs and flowers, timed perfectly for the Show.

Jo is noted for her exquisite planting and her inspirational spaces – her show gardens exude taste and colour and her keen eye for the planting palette results in stunning effect.

For The M&G Garden, Jo has chosen tumbling roses and peonies in a palette of greens, punctuated by soft pinks, lavender blues and creams with a touch of orange. The garden will be partially covered by trees and lush planting with Jo drawing on her local influences from the vernacular architecture features synonymous with the Sussex and Kent countryside where she currently lives. 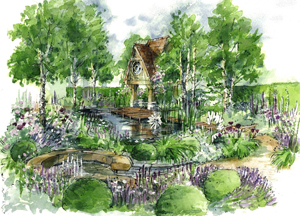 Purbeck stone will be used at the far end of the swimming pond – a tribute to her childhood in Dorest – to perfectly complement the romantic retreat where visitors will be able to unwind away from the hustle and bustle of busy city living.

Jo has designed several show gardens for RHS Chelsea, winning numerous awards including Gold and Best in Show as well as Best New Rural Garden. Speaking about her 2015 garden for M&G she says: “I wanted to create a special garden for M&G that is a retreat, yet follows the principles of traditional British gardening: local materials such as oak and limestone surrounded by typical cottage planting with more than a hint of the woodland.”

M&G Marketing Director, Jacqui Haskins comments that this will be Jo’s sixth Show garden at RHS Chelsea and they are delighted to be working with such a well-regarded female designer along with her all-female gardening team: “Each year The M&G Garden is an example of how British garden design has developed, but with many recurring trends that have stood the test of time – an approach that reflects M&G Investments’ own company values. We are confident that Jo’s creative design will once again create a show-stopping garden for all to enjoy,”she says.

We will run updates on Jo’s progress with the garden over the coming months. You can also find details on her website at: jothompson-garden-design.co.uk

Tickets for the 2015 RHS Chelsea Flower Show are available from:

https://www.rhs.org.uk/shows-events/rhs-chelsea-flower-show/tickets
The Show runs from Tuesday, 19th May 2015 until Saturday, 23rd May. Members’ Days are on Tuesday 19th and Wednesday 20th.