A garden designed by John Everiss for sponsor Chorley Council commemorating the end of the Second World War, will promote the special message of helping people through adversity.

‘The Evaders Garden’ has special significance for the designer whose father Stan Everiss, served with the RAF. He was shot down in 1943 and was helped to freedom by ordinary French citizens and the local resistance.

A sculpture of a young flyer, seconds after parachuting into France, hides in the ruins of a war damaged church. His eyes look up to a stained glass window of two young French people reaching out to him. 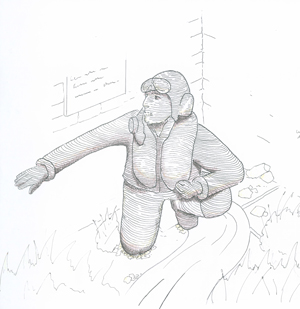 The sculpture will be life size and constructed using individual sheets of steel 10mm apart building up a detailed 3D image of the airman. Planting will be a mass of perennials and annuals surrounding the sculpture as nature reclaims the abandoned church providing both colour and a calm reflective setting.

A backdrop of large shrubs behind the wall link the garden to the trees backing the garden.

Steps leading from the church show his eventual pathway to freedom while surrounded by engraved stones with the names of helpers.

John was awarded a Gold medal for his design at last year’s RHS Chelsea Flower Show.