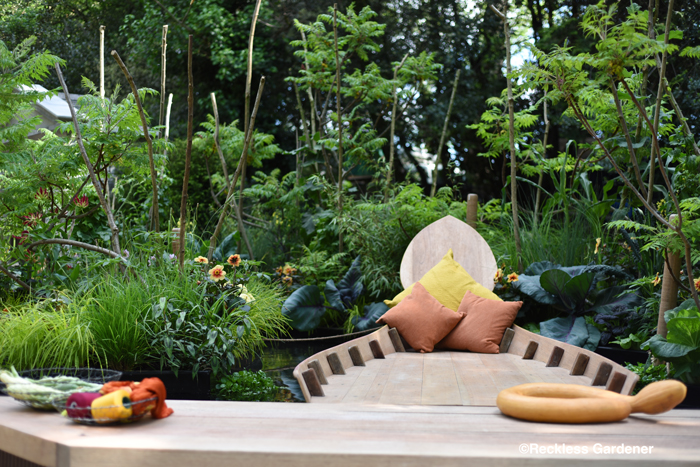 A show garden has several functions and one of them is to reflect the work of the sponsor. This can be especially important where that sponsor is a charity and this year both in the Fresh and Artisan categories at the 2016 RHS Chelsea Flower Show there are several important messages portrayed through gardens.

In the Fresh Garden category, ‘The Modern Slavery Garden’ designed by Juliet Sargent won Gold for an evocative and in many ways simple design that really sends out the message that behind front doors and railings there can be misery and slavery. 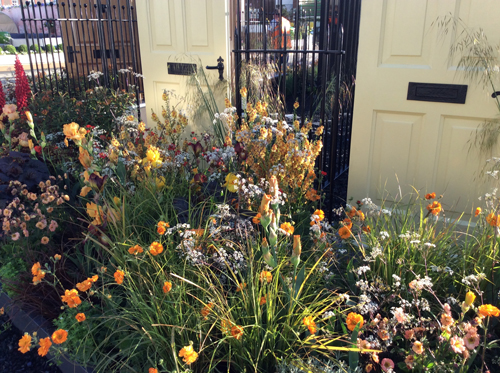 I thought this garden a well deserved Gold and hope that its important message will get through to show visitors. The garden also launched a new introduction, the ‘Modern Slavery Rose’ developed by Dickson Nurseries, based in County Down, Northern Ireland.

Gardens are design to challenge at Chelsea as well as entertain and that is certainly the case with The Marble and Granite Centre’s ‘Antithesis of Sarcophagi’, which won both a Gold and Best in the Fresh Garden category. To all appearances a white cube, it is a garden turned inside out. Look through the peep-hole and you get a fantastic perspective of the garden within. A very clever design by Martin Cook and Gary Breeze.

The Fresh Garden category is certainly varied this year with the rugged Icelandic landscape of The Garden of Potential (Silver-Gilt) the ‘World Vision Garden’ (Silver-Gilt) with its curvy turf waves, and the story of plant dyes depicted in the AkzoNobel ‘Honeysuckle Blue’ garden (Silver-Gilt). The conflict in the Ukraine is depicted in ‘The Imperial Garden – Revive’, (Silver) which has a thought provoking theme designed by Russian designer Tatyana Goltsova, while urban connections are articulated in a design by Lee Bestall (Silver) for ‘The Sir Simon Milton Foundation Urban Connections Garden’.

The Artisan gardens are a class of their own at Chelsea and I never cease to be amazed at the creativity of the designers who work on such compact plots. However, they often strike a resonance with show goers who can perhaps see in them something of their own gardens as well as being able to easily absorb the message they often carry for their sponsors.

This year the Best Show garden in this category went to Sarah Eberle for her depiction of the Mekong River for sponsor Viking Cruises (pictured banner above). Justly awarded a Gold, this delightful garden perfectly encapsulates life on the Mekong and inspires the onlooker to think about holidays and travel. 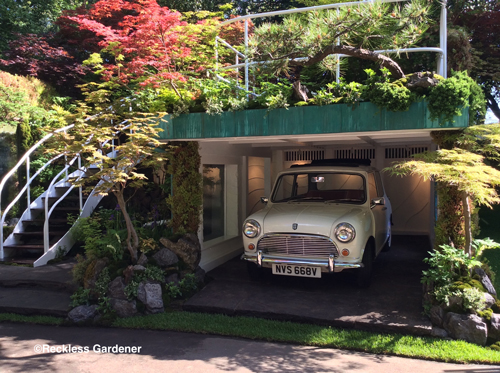 Over several years now we have come to appreciate the artistry of Kazuyuki Ishihara’s Japanese gardens. This year is no different except he has moved away from the more formal design to create a two-tier garden for an antique car enthusiast with a planting design to complement the car. (pictured above) No surprise he won another Gold but he really has excelled himself this year.

The Pro Corda Trust’s ‘A Suffolk Retreat’ designed by Frederic Whyte (Silver) is a lovely garden inspired by the Arts & Crafts movement. It celebrates the work of the Pro Corda Trust, an educational charity providing training for talented musicians and children with special educational needs. An oasis of calm. 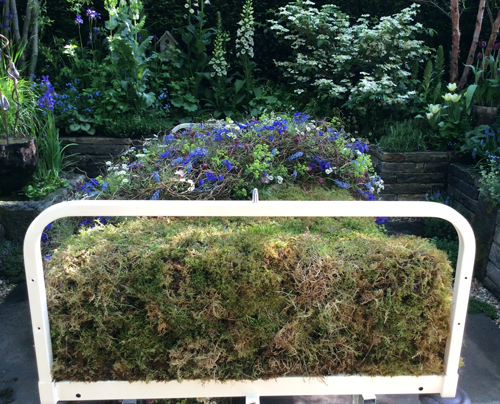 Gold also went to Alison Doxey and Stephen Welch for their ‘The Garden Bed’ in partnership with Asda. A creative design using a real hospital bed from which a patient can view the peace and calm of the garden beyond.

John Everiss returns to Chelsea again this year with his design for the ‘Meningitis Now Futures Garden’ (Silver-Gilt). A Greek themed folly forms the centerpiece of this peaceful Cotswold Garden with its important message about recovery from Meningitis. 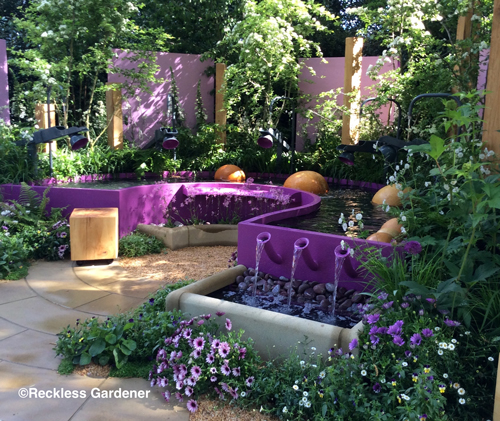 The Papworth Trust Together We Can garden (Silver-Gilt) designed by Peter Eustance features a water marimba generating an acoustic pulse. With a neutral woodland backdrop this garden has several interesting features with the noise of the marimba creating a soothing and calming effect.

Six Artisan gardens but all with very different designs, messages and creative ideas.