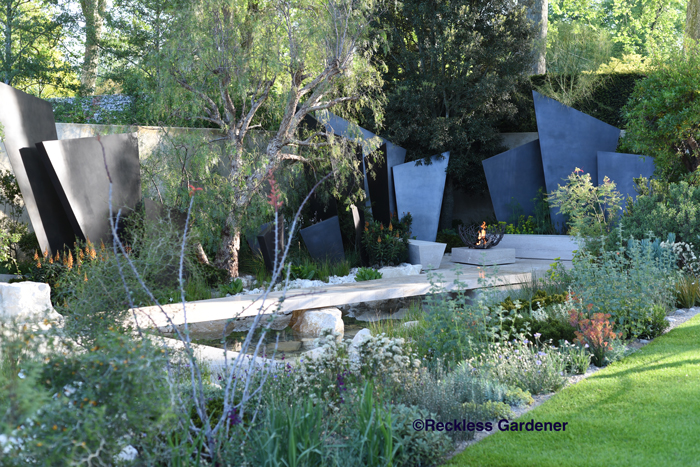 That said, there is also the usual wide variety of gardens and themes as well as some quirky and more relaxed designs which this year add a certain fun and lightness to Chelsea.

Best in Show and Gold has gone to The Telegraph garden designed by Andy Sturgeon for his ‘captured landscape’ design (banner above) depicting the magnitude of geological events that have shaped our landscape. As we expect with Andy his design has some cutting edge features but as a maestro of hard landscaping he also has the skill to blend the planting to stunning effect. A technically very complex garden where the work of a master has paid off with the ultimate accolade. 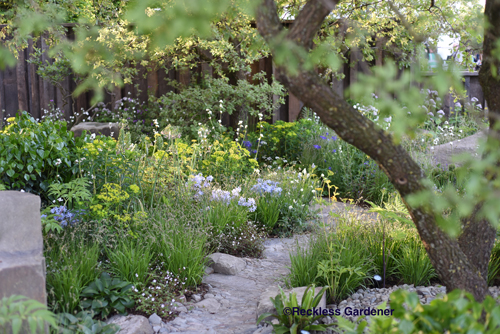 In my book Cleve West can do no wrong and so I was keen to see his design for the M&G garden, inspired by the natural woodland in Exmoor National Park (above). If I had to tip a garden for Gold it would be Cleve’s because he is another master of planting in harmony with landscaping, so I was delighted to learn he was awarded a Gold for what is a cool and reflective garden paying contemporary homage to the landscape that made such an impression on him as a young man.

One memory of the garden I will always have is the sun shining through the trees and the softness of the planting against the hard rock depicting the typical terrain of Exmoor. Good one Cleve. 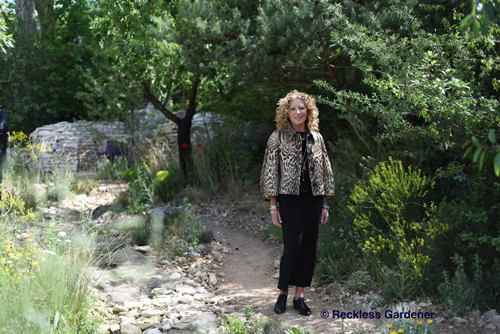 Seeing the L’Occitane Garden in the early morning sun has also seared itself into my memory. James Basson wowed the gardening cognoscenti with his garden for the same sponsor last year and so my expectations for his return were very high. I was not disappointed as his garden depicting the beauty of the harsh yet varied environment of Haute Provence is both stunning and breathtaking. (above, Kelly Hoppen on the garden.)

Awarded a Gold, this was surely a strong contender for Best in Show and so completely different from his design last year. Again, a technically difficult garden to design but carried out to absolute perfection. James explained that he brought in craftsmen from the region to help construct the garden using native materials – the result is just stunning. Obviously, James was delighted with his Gold medal: “I am absolutely thrilled to receive such a prestigious accolade from the judging panel at Chelsea. The award is especially heart-warming as Provence is my home, something that has made this project even more special,” he said. 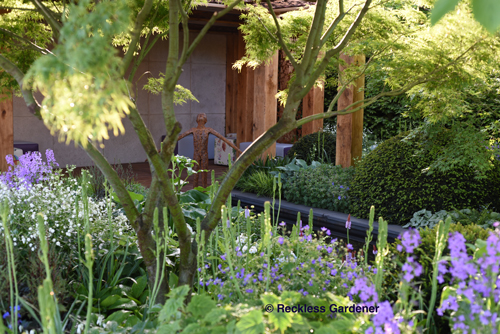 Chris Beardshaw kept to the woodland theme with his garden for Morgan Stanley – The Morgan Stanley Garden for Great Ormond Street Hospital (Gold) – again beautifully executed and planted.(pictured above) Chris has a way of perfectly placing sculpture in his designs and this garden is no exception with a beautiful bronze face sitting so perfectly in his gentle planting. At the top of his garden there is a summer house inspired by a Japanese azumaya, all perfectly proportioned and at one with the overall design. After the show, the garden will be replanted at Great Ormond Street Hospital where I feel sure it will bring a lot of joy. 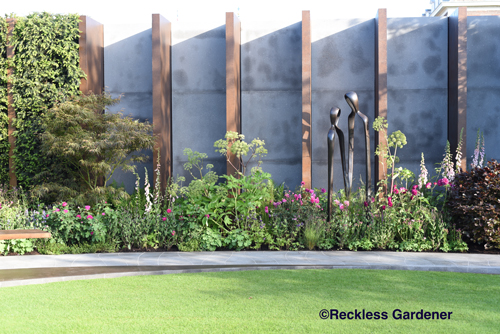 I know that I can always rely on Jo Thompson to come up with a design containing plenty of roses and perennial planting, its what she does so well. This to me is the essence of gardening and very much to my taste, so I was delighted to learn that she was returning to RHS Chelsea again with the Chelsea Barracks Garden (above). Not an easy brief this with her design inspired by the heritage of the Chelsea Barracks site but she triumphs yet again with a traditional British rose garden re-imagined for the 21st century, with the garden deservedly winning Gold. After the show the garden will be removed to form the centrepiece of the Royal British Legion’s Village in Aylesford Kent to go on bringing enjoyment to wounded, injured and sick veterans. 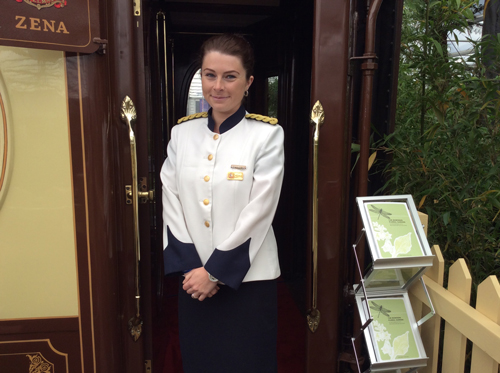 I did say there was a lot of fun at Chelsea this year and one of the highlights for me was Zena the Belmond British Pullman carriage in the Great Pavilion. An inspired part of the Bowden’s exhibit, it will prove a great crowd puller during Chelsea week. That train carriage is just something! Crowds will flock to the 5000 Poppies Project making a dazzling statement in front of the Royal Hospital. I haven’t been able to confirm exactly how many crocheted poppies are actually on display but the installation is certainly a lovely way to honour servicemen and women. (pictured above, we are welcomed by Michelle on board Zena.) 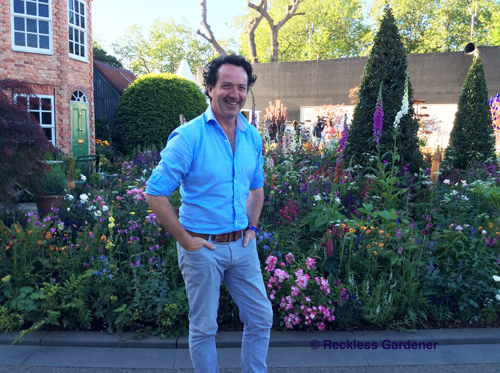 However, I have to say that Diarmuid Gavin’s garden in partnership with Harrods – The Harrods British Eccentrics Garden (Silver-Gilt) – was just the cream on the cake for me. Diarmuid is one of the most likeable guys in the business and he isn’t afraid to do wacky or off-the-wall stuff. My sense of fun was certainly catered for with his revolving topiary, swirling flower beds take on William Heath Robinson. Domed topiary, spring flowering perennials and roses danced in the sun – quite literally – making this one of my favourite gardens. 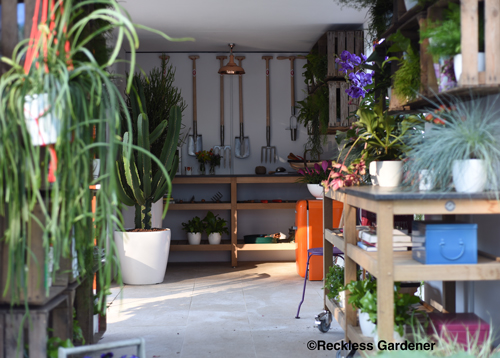 Another garden bringing a lift to the heart and let’s admit it, is really what gardening for the majority of us is all about, is Anne-Marie Powell’s RHS Feature Garden for the RHS Greening Grey Britain campaign. She perfectly encapsulates the mood to get people into gardening with a feature garden (not judged) oozing with ideas, fun, practicalities and the important message that plants enrich our lives and have the capacity to lift our hearts. (pictured above, a corner of the feature garden.) Rather inspirational of the RHS to choose Anne-Marie to present this feature as her lively personality shines through this garden with lots of ideas, from both a structural and planting point of view. A joy to the heart. 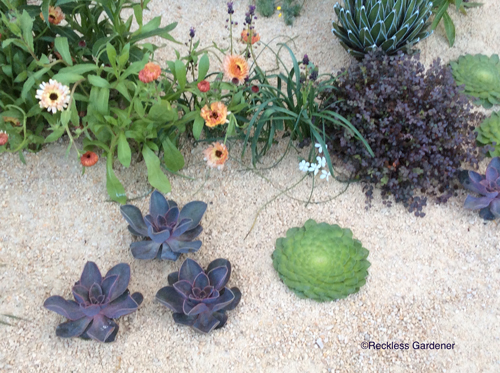 We couldn’t help returning again and again to the Winton Beauty of Mathematical Garden (above) designed by Chelsea Physic head gardener Nick Bailey. (Silver-Gilt). This garden, so carefully planted, is bursting with plants of the Southern Hemisphere and Mediterranean planted with precision and not overpowered by hard landscaping which I felt on some gardens was a drawback this year. 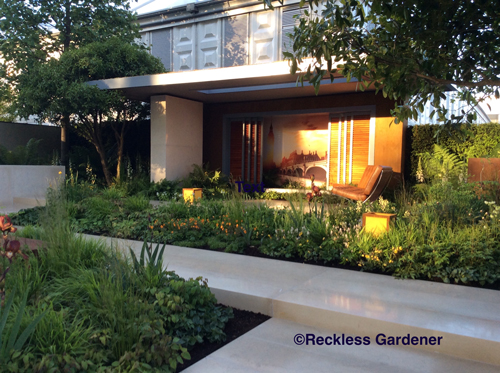 I liked the formal, relaxed feel to Charlie Albone’s ‘Husqvarna Garden’ (Silver-Gilt) and felt at home with Paul Martin’s Vestra Wealth Garden of Mindful Living (pictured above), which I felt was very clever with its centralised main planting. (Gold)

Catherine MacDonald’s garden for Hartley Botanic (Silver-Gilt) depicts a walled garden with a signature glasshouse. Here is another garden with so much to discover, with its cool, relaxed feel, shady planting and delightful glasshouse containing all manner of wondrous things.

Sam Ovens tackles the difficult triangular plot at Chelsea with his garden for Cloudy Bay (Silver-Gilt). No boundaries with this garden (which can be viewed on three sides) with a planting palette of mainly heathers, pines and grasses. After the show, elements of this design will be donated to Horatio’’ Garden.

Young designer, Hugo Bugg’s garden for the Royal Bank of Canada (Silver-Gilt) draws inspiration from the Mediterranean pine habitat of Jordan. The Watahan East & West Garden (Silver) designed by Chihori Shibiyama and Yano Tea brings together the opposites in planting of Japan and England whereas Matthew Wilson’s design ‘God’s Own Country’ a garden for Yorkshire, showcases the county’s wealth of stunning scenery and iconic heritage (Silver). 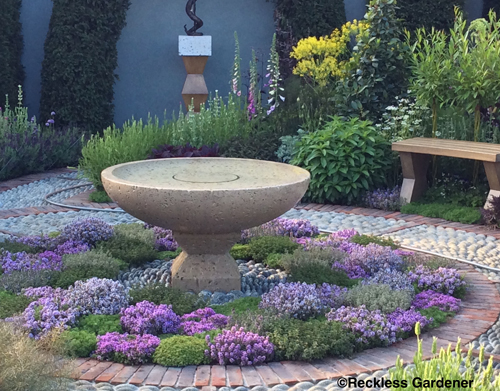 The St John’s Hospice – a Modern Apothecary Garden’ (above) demonstrates Jekka McVicar’s skill and knowledge at its best. Awarded a Silver-Gilt I thought this garden was worthy of a Gold with its combination of native plants and grasses, herbs and lavender lined path. Beautifully constructed and lots to see and understand.

Hay Joung Hwang’s garden for LG – ‘the LG Smart Garden’ – will appeal to the technophobes with its demonstration of how technology can be used in the garden (Silver-Gilt) with a design representing a Scandinavian lifestyle garden.

Too much hard landscaping for me this year tended to dominate the planting on some of the show gardens. Those designers who achieved the perfect blend and balance are the Gold medal winners and rightly so.

As one colleague commented, Chelsea is the haute couture of gardening where very few can purchase the gardens but many will take away inspiration from a myriad of planting scenarios, long may it be so.