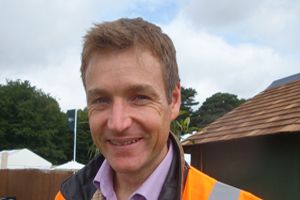 Horticulturist and award-winning garden designer, Chris Beardshaw, is to become an RHS ambassador, with special focus on community gardening.

Sue Biggs, RHS Director General, commented that she is thrilled Chris is joining the campaign as an ambassador: “Chris is one of Britain’s best-known and best-loved gardeners and has long been involved with, and championed, community gardening projects. He is a close friend of Nick Knowles, who also has a keen interest in supporting our community gardening campaigns,” she said.

Sue explained that RHS Britain in Bloom volunteers invest upwards of 10 million hours a year into greening up and cleaning up Britain’s villages, towns and cities: “These volunteers create safer, happier environments, where crime is reduced and transform disused spaces into beautiful places where communities come together to engage with each other,” she continued.

Chris Beardshaw said: “I’ve been involved in many community gardening projects over the years and have seen first-hand the incredibly positive impact they can have on people living in the area and involved in gardening. They create friendships in streets where people didn’t even say hello, and make brighter, more beautiful places to live. It’ll be a privilege to celebrate the work of the Bloom volunteers and encourage more people to get involved.”

Chris will join Adam Frost on Friday 10 April to launch RHS Britain in Bloom 2015 with a special community transformation project, and he has other projects already planned over the year.

Chris is a regular panelist on BBC Radio 4 Gardeners’ Question Time and seen weekly on BBC Two in The Beechgrove Garden from April to October.

For further details on all of Chris’s latest projects please visit: