David Austin to name rose in honour of Roald Dahl 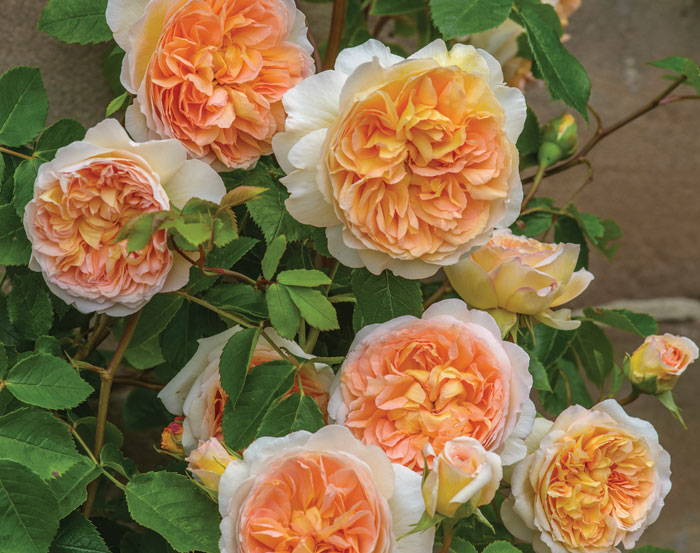 This year, 2016 marks 100 years since the birth of Roald Dahl, one of the world’s greatest storytellers. In honour of Dahl’s birth, David Austin will be launching a new David Austin English Rose as a tribute to Roald Dahl’s first major literary success as a children’s author with James and the Giant Peach published in 1961, the same year that David Austin launched his first English Rose. 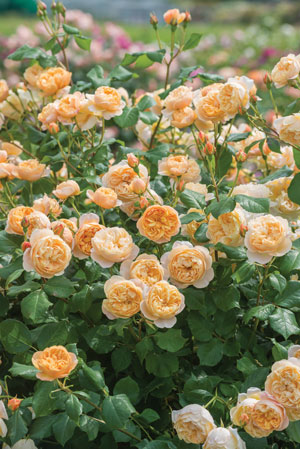 Roald Dahl will be unveiled at the Chelsea Flower Show in May 2016 alongside two other new introductions – Imogen and Bathsheba.

Roald Dahl (Ausowlish) is a free-flowering variety with flowers of a perfect peach colouring. The young buds are a beautiful soft orange-red, the red reminiscent of the blush found on an actual peach.

The rose has a lovely medium strength Tea fragrance with leafy elements and dark fruit notes. A percentage from the sale of each rose will be donated to Roald Dahl’s Marvellous Children’s Charity, which helps make life better for seriously ill children in the UK. Growth size is 4ft tall x 3ft wide.

Bathsheba (Auschimbley) (pictured banner above) is an English Leander-Hybrid and a welcome addition to the English Climbing Rose collection. With its long, elegant, apricot-yellow buds which open to classic, shallowly cupped rosettes, the blooms are a beautiful blend of colours, with the upper side of the petals being a subtle shade of apricot-pink and the under sides a lovely soft yellow. The rounded myrrh fragrance has hints of honey and as the flowers age, the fragrance develops an element of Tea. 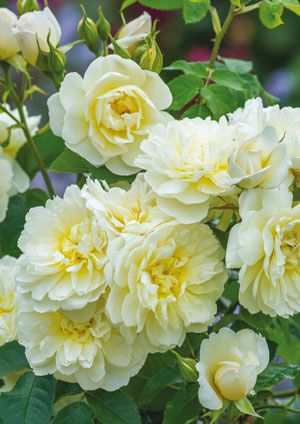 Imogen (Austritch) (pictured right) is a healthy and floriferous rose with a natural radiance and charm. The pretty soft, lemon blooms begin as pointed buds, which become more rounded as they open. The fully open blooms are medium-large in size and distinctive in character with many delicately frilled petals arranged around a classic button eye. Over time, they gradually pale to almost cream. The fragrance is light but pleasant, with hints of fresh apple. Imogen forms a sturdy, quite upright shrub with attractive mid-green glossy foliage.A healthy, vigorous climber with good repeat-flowering and attractive mid-green satin foliage, the rose has been inspired by the spirited heroine of Thomas Hardy’s Far From The Madding Crowd. It grows up to 10ft in height.

This year is particularly special for David C H Austin OBE, as he celebrated his 90th birthday in February. He has spent over 70 years immersed in his craft and has become one of the most iconic rose growers in the world.

In the early years there was quite a lot of resistance to David Austin’s ideas as his peers assured him that nobody would want to grow his style of roses! At that time the trend in the rose growing world was for Hybrid Teas. Fortunately, following his instincts he offered his roses to the public himself, taking orders across the kitchen table! 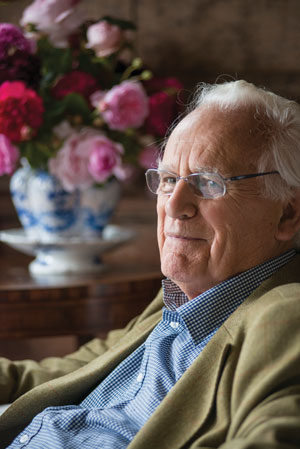 The rest, as they say, is history. His quiet determination, passion and patience have led him from a hobby breeder as a young teenager to the father of English Roses, which have received worldwide acclaim. His English Roses have become highly popular and gardeners have been fortunate to benefit from his lifetime work. In recognition of his work in breeding roses he was awarded the OBE in 2007. (pictured left Mr David C.H. Austin)

Many of David Austin’s customers now order their roses online and have over 800 roses to choose from – www.davidaustinroses.com

Gertrude Jekyll called garden roses ‘intimate and well-loved friends’ and often pointed out in her writing that roses ‘give us happiness and true satisfaction’. Certainly we can all benefit from the happiness and satisfaction that David C H Austin has given us with his wonderful English Roses.

Personally, I can’t wait to see them and feel sure they will be welcome additions to the already impressive range from David Austin Roses.

All pictures are ©of David Austin Roses®