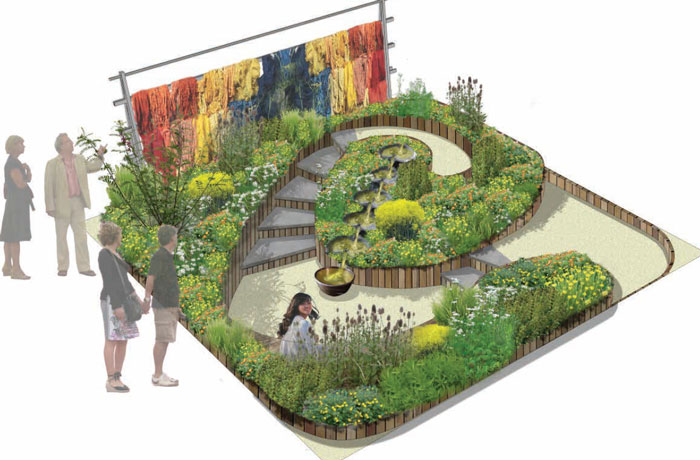 It would be hard to think about the Dutch Golden Age without visualizing the plant colours which were so highly esteemed by painters such as Rembrandt and Vermeer, or the highly coloured fabrics which were dyed using plants.

The ‘Honeysuckle Blue’ garden, at the 2016 RHS Chelsea Flower Show, will serve as a vivid reminder to visitors of the value of plants in the dying and painting process. The garden is being produced by a foundation called Farm of the World, one of the projects of the Leeuwarden European Cultural Capital in 2018. Their Chelsea Show garden, which will be in the Fresh Category, will be one of the main activities of their celebrations.

Designed by Claudy Jongstra (in collaboration with Stefan Jaspers), the garden will showcase the age-old techniques of using plants to dye fabrics in beautiful colours. These techniques have become obsolete and are nearly forgotten, so the Dye Garden aims to show the value, quality and sustainability of these techniques.

The dye garden will show, not only the beauty of plants, but also the power of the colours they can produce when transformed into dyes. Artificial dyes have become common today but the natural dyes, as used by the Old Masters, produce colours that are inherently different, with increased depth, shades, nuances and movement.

The garden will contain plants that are all native – important for various kinds of wildlife – and will provide food and shelter for insects. 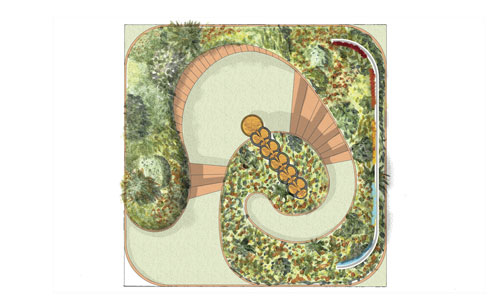 Plants will include Woad, Dyer’s Chamomile, Indigo, Weld, Nettle, Wild Teasel, Valerian, Calendula, Onion, Madder, St John’s Wort and Hop. Woad, a blue pigment which is very rare in nature, used by the Britons to paint themselves, giving them a wild look in battle. In the 16th and 17th centuries its cultivation increased considerably and in the last decade has seen something of a comeback.

Wonderful Indigo, ‘the colour of Kings’ echoes the richness of the sea and the midnight sky while Nettle has been used by skilled and experienced artisans in Scotland to produce the yellows and dark greens for classical Harris tweed.

At the heart of the design is a spiral: the universal symbol for development and sublimation. It also reflects sustainability, as the dying process and end product – naturally dyed wools, are 100% sustainable.

The garden is sponsored by the Dutch Embassy and AkzoNobel.

‘Honeysuckle blue’ is one garden I will be looking out for on press day as it sounds fascinating and informative.