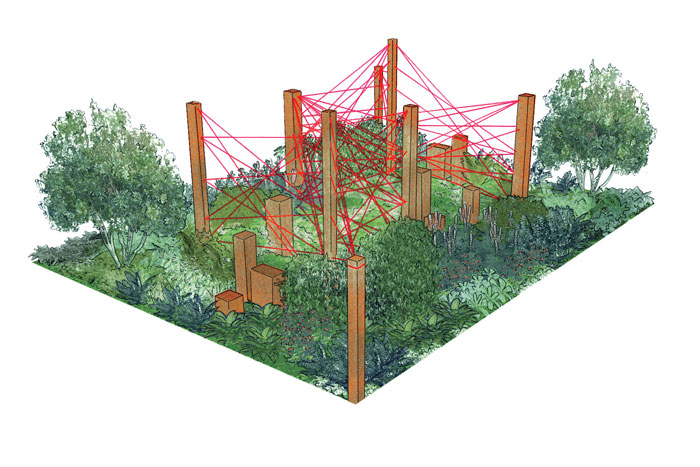 Garden designer Robert Barker will be presenting his Red Thread Garden at the RHS Hampton Court Palace Flower Show under the Conceptual category (5th to 10th July 2016). The garden marks his debut as a designer at an RHS Show and Reckless Gardener’s Sandy Felton recently caught up with him to see how his plans for the garden are going.

Robert admits that so far preparing for the RHS Hampton Court Palace Flower Show has been an amazing rollercoaster ride, as he says: “An experienced show garden designer told me that showcasing a garden is the most intense design experience that I will have which I now understand but I have loved every minute of it and learned so much.”

His concept for the Red Thread Conceptual garden comes from an ancient Chinese myth: “It is believed that when we are born the gods have tied every one of our ankles with a red thread and attached it to all the people whose lives we’re destined to touch, regardless of time, place or circumstance,” he explains. “This thread may stretch or tangle, but it will never break.”

Robert had been aware of the Red Thread myth for some time and wanted to use it in a creative form. He was sitting at a table with his daughter, who was drawing with crayons, when an email from the RHS came through about applications for the Hampton Court Palace Flower Show: “When I read that there wasn’t a brief for the Conceptual category, as it is the Conceptual category ten year anniversary, I instantly thought of the red thread myth and borrowed one of my daughter’s crayons and started sketching,” he explains.

That original sketch has been the basis of his design for Hampton Court and although it has changed in many ways the essence of the original remains.

Robert came to gardening after a career as a singer-songwriter and he admits that, like music, gardening is an extremely powerful thing: “Gardens are effecting, reflective and can change how we feel,” he says. “This is why gardens are so important in helping people cope with depression and why gardens can help with recovery from illness.” He realizes that plants are a constant reminder that we are surrounded by life and the impermanence of life, the fact that nothing lasts forever is particularly witnessed in a garden.

Being able to create a garden that his clients enjoy makes him feel proud and he finds the whole design process is more creative than he could ever have imagined. 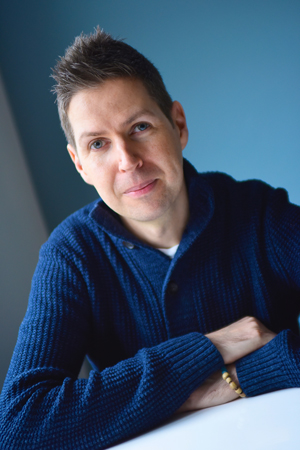 Robert (pictured left) moved to London in his mid-twenties and after years living in flats and being denied a garden of his own, he started to realize the importance of gardening. Then in 2010 he went to the RHS Chelsea Flower Show for the first time and stood beside Andy Sturgeon’s garden and instantly knew, there and then, that he wanted to change the course of his life and follow a career in garden design.

For Robert, Andy Sturgeon has remained a constant influence as has Gilles Clément. He admits that he is a modernist designer, influenced by modern culture, architecture and art but he is not a minimalist and likes his designs to be full of life, colour and creativity. He finds his magic in plant combinations, rhythm, repetition, contrast and harmony.

So what does he do for relaxation? Music is still incredibly important to him: “I am a Buddhist, a huge baseball fan, lover of film, art and literature but spending time with my two children and my wife brings me the most joy,” he explains.

Although his Hampton Court Conceptual garden marks his debut as a designer at an RHS Show he has been part of an RHS Chelsea Flower Show Gold Winning and People’s Choice Award Team Member in 2011. He is no stranger to Hampton Court Palace Flower Show – in 2015 he was part of a Silver-Gilt winning show garden team. He has also worked as a gardener for several designers including Diarmuid Gavin and Julie Toll. Robert studied Garden Design and Planting Design at the industry respected Capel Manor College before being trained at the Royal Botanic Gardens Kew.

Robert has his own design practice in London – http://www.robertbarkerdesign.com

We wish Robert every success in the lead-up to RHS Hampton and feel sure that we will see more of his designs at future shows.