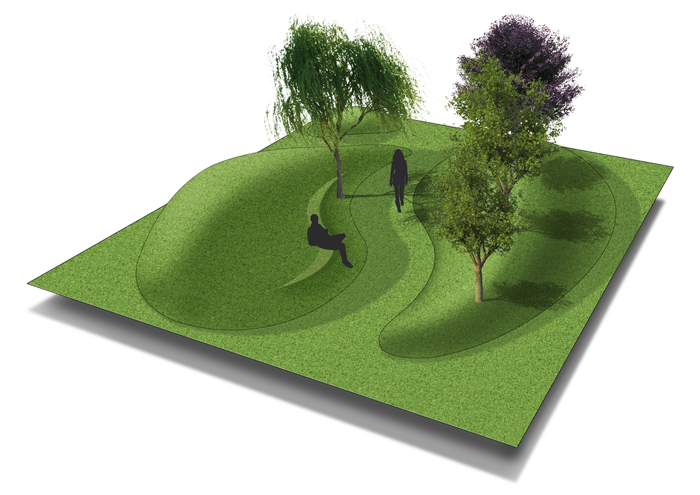 The gardens celebrate the 300th anniversary of the eminent landscape architect’s birth. Brown was famous for introducing new concepts which favoured naturalistic landscape, sweeping away a previously formal patterned style. He became a pioneer in the gardening world and is seen by some as ‘England’s greatest gardener’.

‘Reflecting the Landscape’ (pictured banner above) designed by Victoria Truman, (from Kent) makes a contemporary homage to Brown’s landscaping. Using serpentine landforms to create the illusion of a valley the design will incorporate a turfed bench to allow the visitor to sit and contemplate the surrounding countryside which will be visible between and beneath the canopies of the trees. 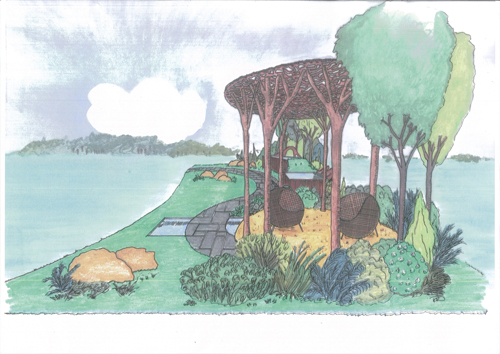 Peter Wood, Zaidee Penhaligon, Emma Wilson, Alex Newman and Lyndsay Cooper (from Sussex) have designed the ‘Capable of Reinvention garden’, (pictured above)based on a study of reflection, inspired by ‘Capability’s’ innovative use of reflection in his lakes. The garden hopes to play with master illusion and perspective. Planting will be fresh and acid greens to evoke the spirit of Brown’s landscapes. 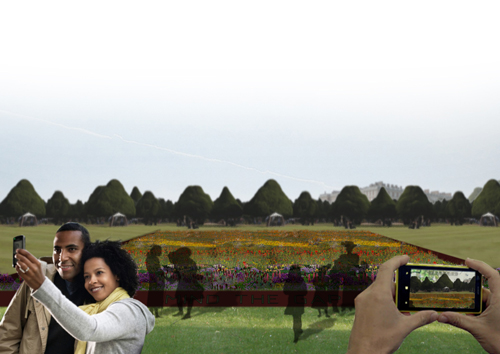 Burnham Landscaping will demonstrate a contemporary interpretation of one of Brown’s most favoured elements – the ‘ha-ha’ style in ‘Mind the Gap’. (pictured above) Designed by Dendetta Pecorari and Alisa Veretti (from Italy), the garden is split into two zones, a lawn reachable by visitors and a wildflower area to be admired. Dividing the two environments is a moat, ensuring the wildflowers remain a place to be admired from afar while creating a clear visual perspective to the onlooker.

The historian, Brent Elliott, comments that Brown was the most famous and influential British gardener of the 18th century: “There is a strong link between Brown and Hampton Court Palace,” he says. “He was appointed chief gardener at Hampton Court in 1764 and his role was to run the kitchen gardens to provide produce for the royal family.”

Brent points out that the RHS is one of 21 festival partners staging events across England and Wales, throughout 2016 anniversary year and points out that the Hampton show gardens are being created as modern responses to aspects of Brown’s design principles: “Visitors to the show will have an opportunity to reflect and debate about the legacy of Brown’s work and what it might mean for the 21st century,” he adds.