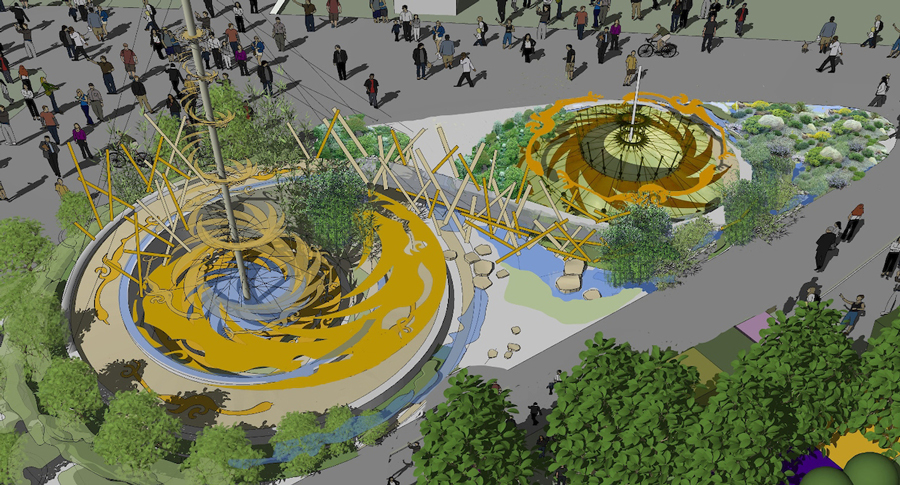 The ‘triangle’ site at RHS Chelsea is one of the most challenging show plots but it is also one of the best for multiple viewpoints. Accepting the challenge for the 2017 RHS Chelsea Flower Show garden is architect Laurie Chetwood and landscape architect Patrick Collins with ‘Silk Road Garden Chengdu, China‘, sponsored by the Chengdu Government.

The designers’ collaboration combines architectural and planting design in a conceptual East-West landscape, with a dramatic ‘Silk Road’ linking the various elements of the garden.

The capital of the ancient Shu kingdom 3,000 years ago, since ancient times Chengdu has been known as ‘the Abundant Land’ owing to its fertile soil and favourable climate. The Silk Road Garden reflects this rich history and culture.

Using sophisticated architectural 3-D modeling software, more commonly seen in the design of buildings, the structure has been developed as a pre-fabricated modular concept that takes into account the location of a vulnerable mains sewer under the site! This will also enable the garden to be delivered to China after the show to launch a major gardens initiative in the City of Chengdu.

At the heart of the garden the symbol of the 3,000 year old Sun and Immortal Bird, which is the logo of Chengdu City and Chinese Cultural Heritage, lies on a central theatrical ‘plaza’.

Planting will reflect the different planting environments with domed forms providing main structure planting and creating an undulating ‘canopy’ to complement the curved landform of the garden.

Valley zones with trees and large shrubs creating shade for lush and dense planting; sunny banks in full-sun for Euonymus alatus; Rose and Potentilla; crevices and cracks planted with Selaginella and Ophiopogon; sunny areas of moist soil for varieties of Iris, Primulas and Astilbe; shady damp areas with Hostas, Selaginella and ferns, ‘Grassland’ with species of Fescue, Meconopsis and Miscanthus.

The garden’s design should certainly lend itself to the triangle site and provides an excellent opportunity to showcase some of the huge variety of species, particularly from the province of Sichuan in celebration of the flora of China.