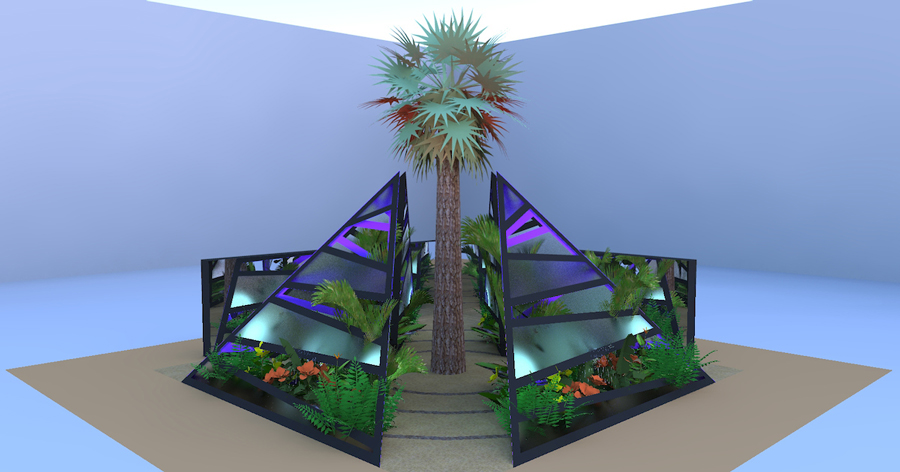 A show garden designed to stand out is being designed for the 2017 RHS Chelsea Flower Show by award winning landscape designer, Jack Dunckley.

Jack, winner of 11 RHS awards, is designing his biggest ever RHS Show garden depicting a striking representation of an active volcano reminiscent of Bermuda and the Caribbean. The garden will be in the Fresh category.

‘The Bermuda Triangle‘ features a large palm tree at the centre of the garden will dramatically erupt from four sections of laser-cut etched aluminum sheeting. The sheeting has an opaque backing and is lit in vivid purple, Jack’s signature colour. Each triangle of the garden houses a specially built lava firepit and mini sanctuary of tropical plants.

The vibrant, tropical plants in rich bright reds, oranges and yellows, mixed with the striking markings etched into the laser-cut aluminum frames represent the lava and pyroclastic flow. A large wall of reflective mirrors surround the back two sides of the garden mirroring the whole design.

Jack points out that the garden, is his biggest at Chelsea: “I’m really excited about this design and delighted to be back exhibiting at Chelsea Flower Show. It’s an ambitious design which I am hoping will make me the youngest ever winner of a Gold medal,” Jack says.

Jack has been winning accolades for his designs since 2008 when he was 14 years old. Already a recognized television personality for his appearances on programmes such as BBC Gardener’s World and ITV’s Alan Titchmarsh Show, he has been described by the RHS as an “Investment for the future”.