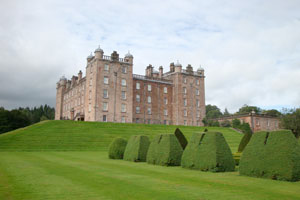 We all have a list of gardens or great houses we want to visit. Mine seems to get longer despite the fact that I visit several a year but one garden and house I have long wanted to visit is Drumlanrig Castle, in the Scottish borders and I was keen to get there this year before the house closed at the end of August.

Drumlanrig is the home of the Duke of Buccleuch and Queensberry and has been home to the Douglas forebears for at least six hundred years. The imposing castle sits atop a raised mound set in the most beautiful scenery, with gentle hills and trees encircling the house itself. Although given the term ‘castle’ Drumlanrig is really a comfortable country house at ease with itself in rolling parkland. You approach the house down an avenue of limes and the castle comes into view almost as a shock, after what seems like quite a long drive from the main gates. Apparently the lime avenue was built to welcome Queen Victoria on a visit but alas she didn’t come, however, one feels that this was her loss and the admirable lime avenue remains to welcome those who do.

The formal gardens are really quite compact in comparison to what one might expect of such a large house. It is perhaps the larger estate and Arboretum that will entice visitors especially those who embark on the tree trail where you can see Ginko, Wellingtonia, Douglas Fir, Weeping Beech, Red Oak and Yew not to mention the Tulip Tree.

Originally, it is thought there was a series of Renaissance hanging gardens at Drumlanrig but by the 1740s many of the terrace walls had been pulled down to create one huge Baroque garden with gentle slopes and unbroken views.

The gardens total 40 acres and include the formal parterres, displaying roses, topiary and perennial plants, peaceful woodland gardens and an extensive network of Victorian paths leading to the heather houses – fashionable in the Victorian era and somewhere to rest your feet and take in the views. There is a large rhododendron collection and one suspects that a visit at the right time in spring will reward the visitor with magnificent displays.

By the early 19th century most of the garden had fallen into ruin and it was left to Walter Francis, 5th Duke of Buccleuch (who for 18 years was president of the Royal Horticultural Society) to replace the formal gardens. He did this with a series of parterres so that today’s visitors can enjoy the East and West parterres, the High and low sand gardens and the delightful Duchess Garden.

The west parterre follows a 19th century layout and is predominately a rose garden. The east parterre was restored in 1978 and is based on an intricate scrolled pattern from 1738 which today is planted with common box Buxus Sempervirens, Juniper, Cypress and Yew. This area is quite stunning with the topiary imaging the silhouette of the rooftop.

From the west parterre you can drop down to the long wall border and the high and low sand gardens to look back up at the dramatic view of the house above you.

The Bog Garden, created in 2005, has Giant Rhubarb Gunnera manicata, Yellow Skunk Cabbage and Primula and Hosta. The foundations of the Rock Garden were hidden under scrub until in 2005 the overgrown area was cleared to reveal the rocks and paths forming the foundations of the garden.

Reconstruction and regeneration are ongoing at Drumlanrig and in 2010 the Winter Garden was created to give a new dimension to the gardens. Here planting of winter foliage and flowering species add warmth and colour during the winter months.

The house itself contains many treasures and has played a significant part in the history of both Scotland and England. It is a most beautiful building, with its 17 elegant ogee turrets, while the entrance front is fit for a king, a Renaissance display making its own statement in stone.

There are some interesting carvings on the house exterior and the colour of the sandstone is a distinctive pale pink which gives the house an added charm.

Typical of Scottish baronial houses, akin to French chateaux, Drumlanrig seems to float in its mountain setting and no matter where you stand on that raised mound, the eye is charmed with extensive views of woodland, hill and stream.

An added attraction is work by acclaimed sculptor Andy Goldsworthy, who has two installations on the estate – the Penpont Cairn, created to mark the new millennium and the Striding Arch, created out of the Castle’s pink sandstone and placed in the middle of the Marr Burn, hidden in Drumlanrig woods.

There is a lovely tearoom and a variety of small shops selling individual gifts and also a rather unusual and informative cycle museum. There is also an adventure playground, walks, cycle routes and bike trails.

Drumlanrig Castle is just outside Thornhill, Dumfries & Galloway. The estate has a longer opening period than the house.

For more information on activities, events and visitor opening times log onto: www.drumlanrig.com