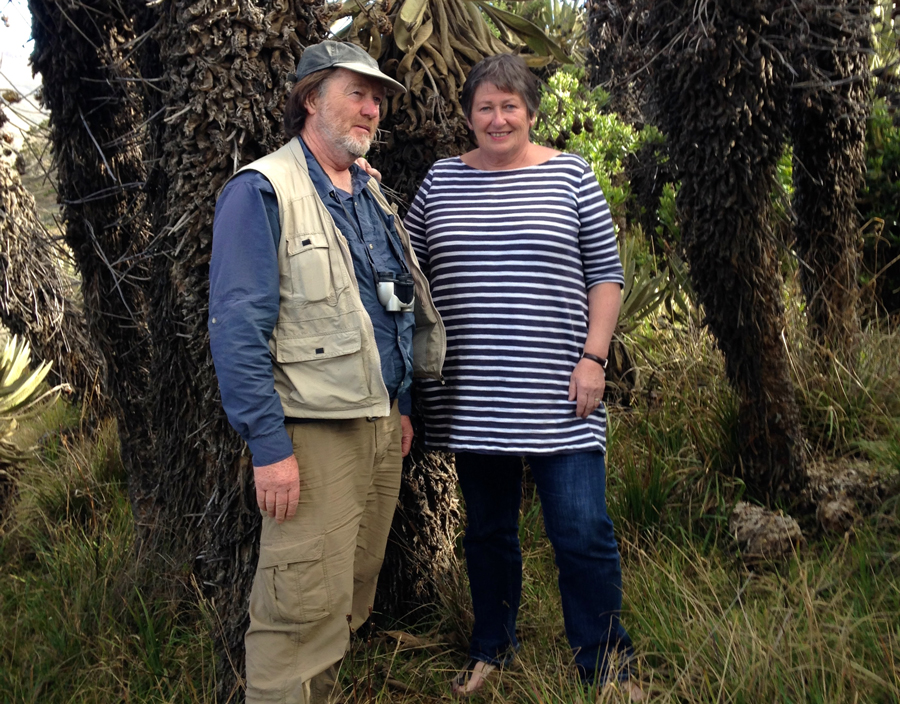 Modern-day plant explorers Sue and Bleddyn Wynn-Jones from Crûg Farm Plants, (pictured above) will be taking inspiration from an incredible plantswoman when they create their exhibit for the 2018 RHS Chelsea Flower Show. In this feature Reckless Gardener takes a look at the people, plants and gardens that will influence their design.

Miss Ellen Wilmott’s love for her renowned Mediterranean garden at the Villa Boccanegra, on the Italian Riviera, and her passion for supporting plant hunting expeditions to introduce wild species, will be central to Sue and Bleddyn Wynn-Jones design and planting for this year’s RHS Chelsea Flower Show.

Ellen was born 160 years ago but was certainly ahead of her time in favouring plants for their diversity, bold leaf form and architectural structure, rather than following the Edwardian fashion for exotic blossoms and blooms. 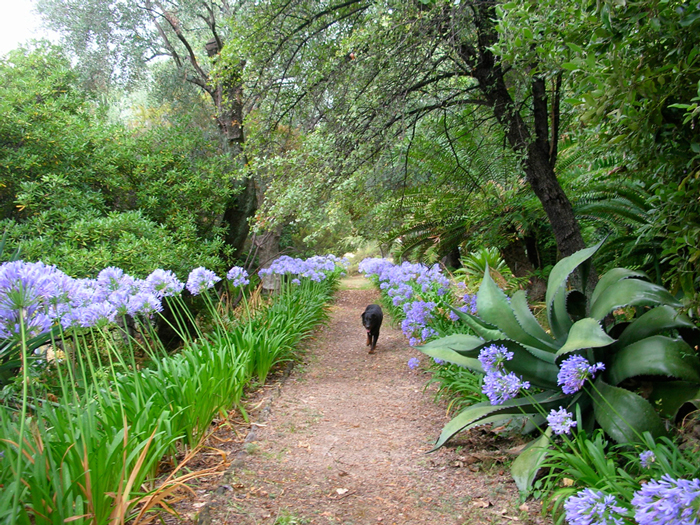 Ellen (1858-1934) was one of two women awarded the first RHS Victoria Medal of Honour (the other being Gertrude Jekyll) and the first female to be elected to the Linnean Society. Many plants bear her name including the well-known Miss Willmott’s ghost (Eryngium giganteum) and Chinese plumbago (Ceratostigma willmottianum).

Her gardens in the UK, Italy and France were famed for their horticultural treasures, many of which still survive at Boccanegra under the skilful attention of biologist Ursula Salghetti Drioli, the current owner of Villa Boccangera. Ursula will be assisting Sue and Bleddyn with their Chelsea exhibit which will also include plants for dry shade from their own collections, many of which will not have been seen at Chelsea before. 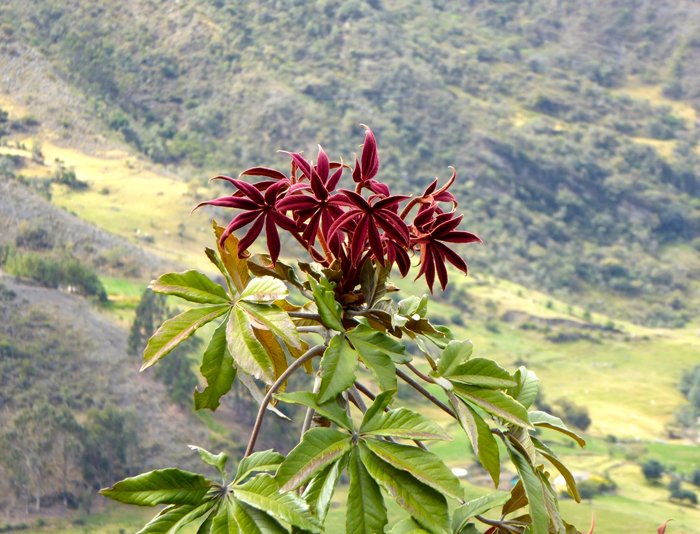 Crûg will be demonstrating more unusual planting ideas for dry shade underneath Oreopanax, (pictured above) as well as those that are heat tolerant. They will be showcasing plants such as Aspidistra, Ophiopogon and Ruscus as well as a sprinkling of others, mostly collected by themselves on their many expeditions and all true to Ellen’s love for structure and form.

Sue and Bleddyn have also been inspired by three other famous Mediterranean gardens, as well as a more recently established garden, all connected to Boccanegra. The first is Giardini Botanici Hanbury, also known as La Mortola, established by Sir Thomas Hanbury, who gifted Wisley to the RHS. The two gardens regularly shared newly introduced rarities in those early years such as Aspidistra. The current Lady Hanbury is a close friend of Ursula.

Just over the French border is another closely allied garden, that of Serre de la Madone in Menton, created by Lawrence Johnston of Hidcote. Records show that he too shared plants and a large range of Crûg’s wild collections now grows in Hidcote’s shaded gardens, where collections of Araliaceae flourish. 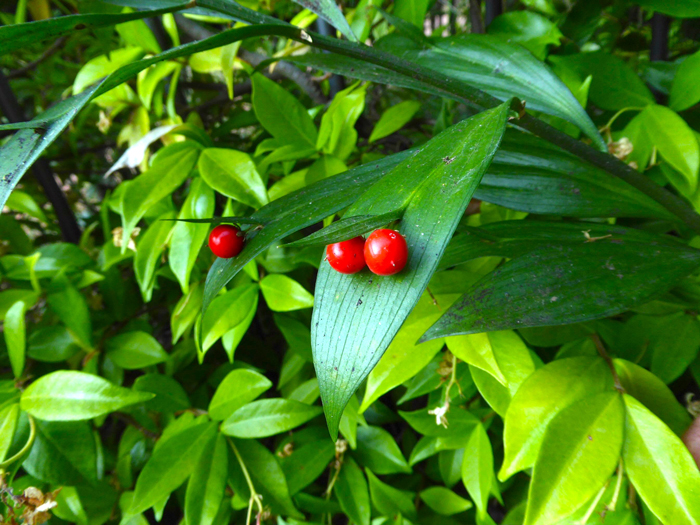 The third garden, Les Cedres, or Jardin Botanique Les Cèdres – the largest private botanic garden in Europe – was acquired by King Leopold II of Belgium in 1904. He reputedly financed the collecting and introduction of countless species of Oreopanax from Colombia, a plant that was in great demand in exotic plantings from the mid 19th century until the First World War.

Finally, La Mouissone in Grasse, a younger still developing garden that has been evolved in this eclectic mixture of British influence. Established and still being developed in a mature olive grove by Lady Lockett, a member of this Mediterranean gardening circle and a keen supporter of Crûg Farm Plants, she maintains an extension of Crûg’s collections in Grass.

Bleddyn Wynn-Jones said: “We are looking forward to highlighting some interesting star plants for the most difficult of garden environments, dry shade. Unusual forms of Ophiopogon, and newly discovered species of Aspidistra and Ruscus, which we’ll be planting under the flamboyant architectural foliage of Oreopanax. We hope these new varieties will capture people’s imagination and appeal to a wider audience.” 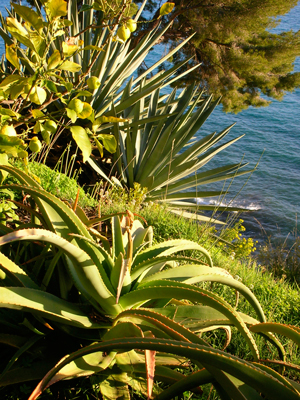 Sue and Bleddyn are holders of a rarely issued, ongoing official Scientific License from the Animal and Plant Health Agency (APHA). They travel across the globe, scale mountains and volcanoes and explore hidden canyons to seek out their elusive specimens. In true plant hunter tradition they have even been known to dodge armed bandits! They make sure they only collect plant material at equitable environments to ensure plants will survive the UK’s climate and, once back home, the couple follow strict quarantine rules to guarantee biosecurity, overseen by APHA.

They also work closely with experts from government agencies and botanic gardens and universities in the countries they collect in. Currently, they are working with Batumi Botanical Garden in Georgia, helping to safeguard varieties of Ruscus, thanks to an introduction via Moscow State University. When an earthquake in Taiwan threatened to wipe out a rare native plant in the 1990s, Sue and Bleddyn were able to help with plants from seed they had collected a few years earlier.

They have collected Ruscus from the many countries surrounding the Mediterranean and beyond and Oreopanax from South and Central America. Aspidistra has a centre of diversity in northern Vietnam and Southern China while Ophiopogon is found in the Himalayas and all through South-East Asia.

Crûg Farm Plants are based on the edge of Snowdonia near Caernarfon in North Wales. The nursery specializes in unusual herbaceous perennials, climbers, trees and shrubs and hundreds of plants are propagated from nearly 18,000 collections gathered on over 50 expeditions by the Wynn-Joneses. They have provided plants for many prestigious clients including several award-winning RHS Show gardens as well as The National Trust, Botanic and Royal gardens. In 2016 the Nursery went peat-free.

This certainly sounds an exciting exhibit and one not to miss. You will be able to find Crûg Farm Plants in the Great Pavilion at GPB124.

For information on the nursery please visit: http://www.crug-farm.co.uk/